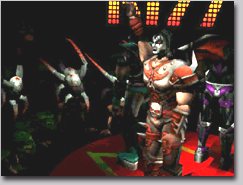 At a Glance: If you've always dreamt of being Gene Simmons and running around a low-poly carnival with a miniature dragon on your shoulder, please stop reading right now and go kill yourself. However, if you've been looking for a fun monster-killing romp low on the brainpower and high on twitch reflexes, this game is for you, as long as you can stand the KISS kitsch. Now let us pray that no one ever makes nude patches. 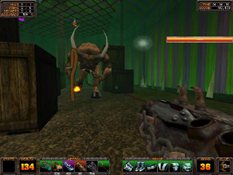 Before I begin this review in earnest, I should make sure and mention that I hate KISS. I can’t stand them. With their platform shoes and kabuki makeup, I always felt ashamed just for knowing that they existed. They may have been popular back in the 70s before I was even born, but so were pet rocks and running onto freeways in a cocaine-induced hysteria. When I first heard that a first-person shooter based on the KISS franchise was being created, I secretly hoped that it was all a mistake, and the game was in fact going to be based on a more acceptable premise, such as child pornography. Nonetheless, having played through the game I have found that, amazingly, it is not lame.

KISS Psycho Circus: The Nightmare Child is the first release by the people at Third Law Interactive, a team which mainly consists of refugees who dove overboard from the sinking H.M.S. Daikatana in late 1998. While I applaud their foresight in that respect, I also have to wonder how thoroughly they thought through the idea for their first title.

Third Law: "We are glad that we have escaped the evil halls of ION Storm, where we were forced to sacrifice our integrity by working for 18 months on an action-oriented four-episode first-person shooter where the player controls a small band of characters with stupid costumes and godawful voices, who are charged with saving the world."

Publisher: "We would like you to work for 18 months on an action-oriented four-episode first-person shooter where the character controls the band members of KISS, complete with their stupid costumes and godawful voices, who are charged with saving the world."

As a guide in their endeavour, Third Law based their game off the work of the "world-famous" comic book creator Todd McFarlane, who is also responsible for other such "popular" comic books as "Evil Hell Busty Bitch-Vixens" and "Chain Grime Death Angst Tales from Beyond the Grave." The game revolves around the four members of the band "Wicked Jester", who are summoned by the clairvoyant matriarch Madame Raven, in order to gather the broken shards of the armor of the four Elders, who previously had defeated the Nightmare King, who has secretly planted a seed for a Nightmare Child, who will somehow destroy the universe in some way that includes a circus, perhaps by concocting an Ultimate Weapon out of straw and elephant poop. Luckily, Third Law drives home this intricate plot by printing it in the front of the CD-insert manual, as well as briefly skimming over it in a short cinematic before the game begins.

However, the plot to the game is a minor concern, as the game mainly grapples with such tough moral dilemmas as “should I kill this monster now or later?” and “where can I find some health?” Yes, Psycho Circus is an unrepentant action game. The point of the game is to kill monsters until you find a key, at which point you unlock a door with more monsters behind it and probably another key. The player is seldom left alone during the game - Third Law has populated the game’s many levels with more monsters than Bill Clinton has illegitimate children. Many of these monsters appear out of “spawners,” large faceless objects which sit around and spit out hundreds of monstrosities with identical programming, not unlike television networks. These large hordes of enemies are accomplished by utilizing the Lithtech engine which, when faced with large numbers of enemies onscreen, prevents the player from noticing any slowdown by crashing and locking up the computer. Third Law has, however, added its own special spices to the Lithtech engine, resulting in something which is more usable than its previous incarnations, although it still manages to trap the player in every crack in the ground wider than one pixel.

The monsters in Psycho Circus are generally creative and memorable, although a few made me wonder if their game designers had accidentally eaten rat poison or one of Levelord’s special brownies. The most common enemies in the game are the “Headless,” small crab-like monsters made up of approximately 8 polygons. Other monsters include the “Gasbag,” the “Ballbuster,” the “Unipsycho,” and the “Fat Lady,” which throws large chunks of sentient fat at the player. One nice feature of the engine allows limbs to be blown off enemies while keeping them alive - I had entirely too much fun breaking both arms off of an unsuspecting Headless and watching it run around frantically, blood gushing from the severed stumps. My main pet peeve of the enemies is that some of them had instant-hit weapons, where you are given approximately 0.03 seconds to dodge before a giant beam of something-or-other rips you to shreds.