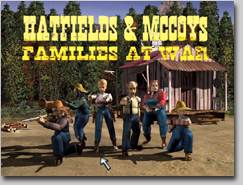 At a Glance: It's a game based off the Hatfield and McCoy rivalry - of course it's fucking awful. If you don't believe me, then perhaps mentioning the fact that Valu-Soft made it will be convincing enough. If that doesn't persuade you, then you're obviously living in some kind of alternate reality fantasy world. 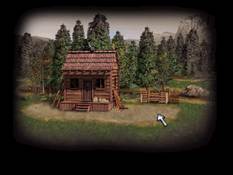 The loading screen. Imagine hillbilly music is playing while you stare at this. Now hammer railroad spikes into your skull to recreate the pain.

Valu-Soft. Never before has a phrase stirred up such raw hatred and rage from me. Valu-Soft is proof that there must indeed be a god, for it is obvious that their products could only be crafted by The Devil himself. Every single game they pump out of their company's bloated orifice of failure reeks of junior high school hack programming, vision-impaired graphic artists, and design docs which were apparently written in Hebrew and translated to some sort of Nordic code. It's all bad, folks. Nothing good has ever come from Valu-Soft and nothing good will ever come from Valu-Soft unless Congress links school shootings to playing their games and immediately decides to shut down Valu-Soft's evil torture factory. However, until that day happens, the world will continue to be a much crappier and awful place thanks to their relentless production of such wretchedly horrid games as Hatfields and McCoys.

It's not clear what started the feud between the families of Randolph McCoy of Kentucky and William Anderson "Devil Anse" Hatfield of West Virginia. But competition over timber, and a pig that a McCoy accused a Hatfield of stealing, exacerbated the tensions.

On Election Day 1882, three of McCoy's sons fatally shot and stabbed Ellison Hatfield. Devil Anse Hatfield and others got revenge by tying the three McCoys to pawpaw bushes along a riverbank and killing them.

The last victim of the feud was Ellison Mounts, who was rumored to be the illegitimate son of Ellison Hatfield. He was hanged in Pikeville in 1900 for taking part in a raid that left two McCoys dead.

East Coast newspapers covered the conflict, and mountain folk often were portrayed as illiterates who carried pistols and settled disputes with violence.

Wow, sounds like an exciting idea for a videogame, doesn't it? It has all the popular elements to be a surefire hit with all the children who are allowed to sit at the "big person" table at Thanksgiving dinner: white trash hicks, the lovely backdrop of late 1800's Kentucky, and the central theme of avenging a pig's death (and people claimed Quake 2 had a weak plot). Luckily Valu-Soft opts to never actually tackle the aforementioned complex plot and simply launches straight into the game with the nonstop intense excitement of a stalled and derailed locomotive. Lupine Games, the soulless human beings who are responsible for this disaster of a title, obviously realize what a deep and rich property they have on their hands because they have sent out such wonderful press releases like these:

'Hatfields & McCoys' is a light hearted real-time tactics (RTT) style comedy shooter from Lupine Games. H&M is very loosely based on the famous American feud done in a cartoon style, bridging a gap between yesteryear's arcade games and the RTTs of today.

It's the late 1800's and the neighbors are actin' up again. What do you do? You load your best gun and head over there to teach 'em a lesson they'll never forget. Welcome to the Hatfield and McCoy feud. Will you be a good shot and a lucky survivor? Plan your strategy and be sure to watch your back. You never know who's got their sights locked on you. So grab yer' guns and lookout! They're acomin' fer ya!

About 'Lupine Games': Lupine Games has been a part-time, two man operation for close to a year now since we began in July of 1998 and we have finally crossed the line into full-time development!

I love that last line. It's the equivalent of me saying something like, "I enjoyed beating the Alzheimer patients so much that I decided to devote my fulltime occupation to anally assaulting them with their own canes."