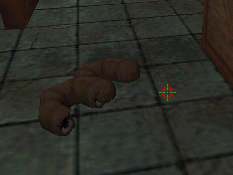 The dreaded Bundt Cake worms. Don't worry if they're too dark to see; you're not missing anything.So Claire and her idiot husband inherit a mansion from somebody who I assume died, they move in, and soon begin encountering strange sounds and voices. It always happens that way; for example, I recently bought a used 1996 Toyota. As soon as I started driving it home, I realized it was making strange sounds and voices! I immediately pulled a U-turn, hauled ass back to the car lot, and returned that sucker right on the spot. The car dealer tried to convince me that the strange sounds and voices were because of something called "the AM radio," but I could tell he was lying by the way he was breathing. Unlike me, Claire and her deadbeat husband decide to stay in their strange inherited mansion, sticking it out until some "strange people" arrive outside the house, apparently to join the strange sounds and strange noises there for StrangeCon 2001.

John, being the braindead mulch-eater he is, runs outside to tell the people to go be strange somewhere else, but he takes the wrong turn at the "go this way if you want to disappear forever " intersection in his front lawn. Claire panics and calls the Police, but they just laugh at her because the Police don't get paid to solve crimes or find missing people. They get paid to create balloon animals and eat popcorn and entertain kids. Having nowhere else to turn to, Claire calls up her moron brother, Jake D. Fens, who was in the process of changing his last name to something slightly less embarrassing like "Jake D. Fuckface." Since he previously returned his car for making "strange" noises, Jake hails a taxi to head over to his sister's strange mansion full of strange people and strange noises. This is where the story ends.

Unfortunately, this is also where the game begins. Although Jake just "locked and loaded" his pistol, I inexplicably began the game with a default knife. Jake apparently believes in taking taxi cab rides only when fully armed. As foreshadowed once or twice or maybe 500 times in the introduction, strange things began to happen in strangely strange ways. Two zombies, who had previously been standing over a strobe / disco light emitting fire, began lumbering in my general direction, attempting to cause personal injury by slowly brushing up against me. Spawn Software luckily made the knife cause the damage equivalent of eating an entire atomic bomb (only with a significantly longer reach), so it's not too hard to cut down these roving retards. In fact, the knife is pretty much the best weapon in the entire game, and I didn't ever really see much point to use anything else. It's not that the knife is some remarkably wonderful item, but compared to the other inaccurate blobs of misshapen polygons in the game, it's the only logical choice.

Soon zombies began lurching towards me from every direction. Well, I assumed they're zombies, based off the whole "Project: Undead" title thing. All they did was wander around aimlessly, act remarkably subhuman, and threaten me while doing no actual damage. So they might be little Darren "Dakota" Tabor monsters, I guess. The zombies range from "slow white guy who runs into you" to "slow white guy who shoots slow white sparkles at you," pausing momentarily to throw in a "slow white guy who throws fried chicken legs in your direction" to the mix. These chicken legs are apparently very dangerous, second in damage only to the campfires which litter 98% of the playable map. If you get within 100 yards of a campfire, your health shoots from 100 to 0 in less than half a second. I guess the fires are some genetically-engineered fire hybrid, the result of merging the DNA of fire with the DNA of velocoraptors or Satan or bullets or something.

After fleeing in terror from the deadly campfires of doom, I sought refuge inside a log cabin which was a finalist in the "lowest number of polygons in a game ever" contest. The owner of the house, who didn't mind living in a place that contained 50,000 wooden barrels, one table, and a few crates, was kind enough to leave behind a few hundred clips of ammo to anybody who was intelligent enough to both enter his house AND figure out how to walk around his table. While I was collecting ammo, I found myself taking damage from two brown worms which were crawling around the joint. I stabbed them to death, causing them to turn into large bundt cakes. I really didn't understand the "devil worm / German dessert cake" connection, but that's probably because I'm stupid. Having safely secured the Crate N' Barrel log cabin, I proceeded to run through the backyard and do the only reasonable thing, which was fall down a well. 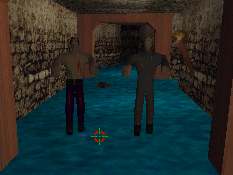 Stay the hell away from wells, unless you're ready to defend yourself from the infamous WELL FAMILY OF DOOM.Unbeknownst to me, the bottom of this well was crawling with evil! I was immediately assaulted by two zombies, a bat, and a spider, all of which were apparently in charge of guarding the precious well water. I knifed those bastards to hell and then attempted to crawl up the ladder on the other side of the well, because (as everybody knows) all wells have ladders inside, in addition to lit torches lining the walls. I spent the next four hours trying to crawl up that one fucking ladder. The coveted Pie in the Sky game engine does a lot of things well, but it does NOT do ladders well. Actually, now that I think about it, the engine doesn't do ANYTHING well. In fact, I'm not so sure that it's an actual game engine. I think it's just 300k of text files containing the phrase "SUCK MY ASS" over and over. The word "STRANGE" is probably hidden somewhere in there as well.

As I slowly progressed through the game, which took me through such exotic locations as "under the dirt" and "slightly to the right of some dirt," I picked up a shotgun and some pipe bombs. I'm guessing that Spawn Software decided that texturing the weapons would cause too many CPU cycles to be eaten up, so almost every gun is just a series of grey boxes stapled to each other. The shotgun, which is like the pistol only more awkward and less useful, is not only slow but also has the additional benefit of never hitting anything ever. They should've just replaced the shotgun with a large chunk of posterboard that reads "I AM UNARMED AND VERY VULNERABLE AND I WET MY PANTS OFTEN." The pipe bombs, on the other hand, are powerful enough to destroy the entire world. Too bad there's only about four of them in the entire game, or at least the parts that I played. I quit around 30 minutes into the game, as it was making me both motion sick and intensely depressed.

As mentioned before, Project: Undead was created by using the "Pie In the Sky" game engine software, a product which warns you what quality games to expect merely by looking at the awfulness of their webpage. Nothing good has ever come from Pie In the Sky and nothing good will ever come from Pie In the Sky, excluding a news report revealing the main programmer's house and computer burned down. And he's sterile. First off, the controlling your character is like trying to navigate a jumbo jet under the ocean. The keyboard is unresponsive, strafing is nearly impossible, and traveling backwards causes your character to move at one mile an hour. Luckily the horrible graphics quality makes up for this, as standing in a map full of dark zombies that look like dark rocks, and dark rocks that look like dark zombies, distracts you from realizing that you'd have more success attaching a joystick to an entire mountain range.

Despite all these negative points, I do have to admit that Project: Undead surely lived up to its "strange" expectations. There were worms that turned into dessert, zombie chefs, unbelievably powerful campfires, bat and zombie families living inside wells, trick shotguns, and lots of dirt. I never quite made it to the "mansion" in the middle of the "country," so I feel I might have let Claire and her dead husband down. Then again, with a name like "Jake D. Fens," I'm sure she wasn't really expecting much from me.