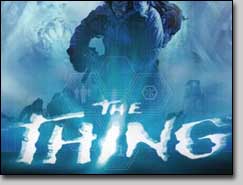 At a Glance: "The Thing" is billed as a "survival / horror" game, but I think Universal Interactive needs to fire their editor; he apparently misspelled "horrible." You play the role of some guy whose name does not matter, a soldier sent to investigate the mysterious crap which happened on the set of the 1982 John Carpenter movie, "The Thing." Unfortunately, your helicopter never gets that far and instead lets you off outside an Antarctic base full of boring clichés, uninteractive storylines, and allies which are about as helpful as your uncle's furniture. To simulate "The Thing" experience without buying the game, simply pretend to hook a mouse and keyboard up to a VCR playing the movie "The Thing" and have somebody repeatedly shout in your ear, "WE'RE ALL GOING TO DIE HERE!" Then throw your VCR and keyboard out the window because if you're dumb enough to actually try this then you obviously cannot be trusted with either. 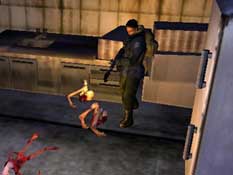 Oh no, LegHeadMonsters are attacking! Protect the kitchen at all costs!

First off, let me plainly state that I really, really, really wanted to like "The Thing." I loved the John Carpenter movie "The Thing" and hoped that this game would follow in the movie's footsteps and creep me the hell out like the first time I saw it in 1983 and the image of The Thing crawling out of the dog's body burned itself into my brain. "The Thing" almost makes up for all the shitty films John Carpenter has directed, but unfortunately "Escape From Los Angeles" will forever tarnish Carpenter's resume like the golfball-sized divots in Robert Redford's face. I tried as hard as possible to enjoy the game "The Thing," which I shall now refer to as "The Shitty Thing" so further confusion between it and the great movie will be prevented. If you don't believe me, then simply read the following ICQ log between myself and Zack "Geist Editor" Parsons:

Okay, well maybe the last part of that conversation wasn't exactly 100% true (I think Zack may have said he hated the "filthy Mexicans" rather than Jews), but I'm sure you get the point. We ran through a mall at 9:00 pm (closing time) to reach an Electronics Boutique, which closed the moment we left with "The Shitty Thing" in hand. As soon as we returned home, I installed it and began playing. To further prove my point, I just asked Emily "Integral" Reigel if I seemed like I really wanted to play the game when I bought it and she said "yes." NO MORE QUESTIONS, YOUR HONOR!

"The Shitty Thing," like many of John Carpenter's movies, is not very good. In fact, it's quite bad. It's clear that the design team really enjoyed playing the game "Half-Life" and took most of their inspiration from this title, but just like in "The Thing" when the alien virus mutated and turned humans into disgusting monsters, their good ideas mutated and turned into a disgusting monster which stole my $54.31 and left me unconscious with a bleeding ass in an abandoned alleyway.

This game picks up where the movie "The Thing" ended, with your character approaching the wreckage of the infamous Antarctic base featured in the classic film. You and your squad of elite cannon fodder are sent in to investigate the site and recreate a cruddy, half-assed version of "Half-Life" in a slightly different location. Throughout this mystical journey you'll walk through snowy fields, travel above snow-covered ground, and wade through snow filled snowstorms. I think there is one level without snow, but that's just because the entire level takes place within what seems like a large, complex bathroom. To aid you in your quest to travel from one linear map to the next, you'll be occasionally given the opportunity to add new members to your group of merry men. These recruits come in three different / almost exactly alike flavors:

Medic - He heals you by using a limitless supply of healing packs, all of which evaporate if he dies. His primary function is to whine a lot and, when the need arises, throw up.
Engineer - This class takes time out of their busy schedule of puking to repair the countless junction boxes scattered across every map. As we all know, military research bases are composed of 90% junction boxes. The other 10% is shipping boxes.
Soldier - He can point a gun and shoot. He does this a lot. He's just like the Medic and Engineer class, except he has no other function (besides dying). Oh, and he can puke right up there with the best of them.