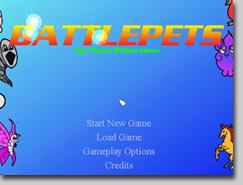 At a Glance: Take the worst aspects of Pokemon, the worst aspects of Digimon, combine them together, and what do you get? Beats the hell out of me, but it's got to be more entertaining than BattlePets. Capture moronic creatures with intensely stupid names and force them to fight other moronic creatures with intensely stupid names until you lose all will to live. Once those six seconds have passed, get ready to strap dynamite across your chest and demand the designer of this game be executed or you'll blow up a Federal courthouse. 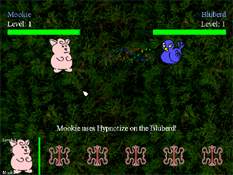 Although hardcore Pokemon and Digimon fans have a surprising number of similar characteristics and traits (addiction to sugar, consistently poor results in 6th grade spelling quizzes, oral hygiene that rivals the Royal Family), there is still a great rivalry between the two groups. Each hardcore fan claims the other cartoon / game / ludicrous merchandising tool is a derivative ripoff and the company who produces it should be burned down, defecated upon, and then banished to various planes in Hell. Going to a Pokemon trading card competition and mentioning the word "Digimon" will - hahahahahaaa. Sorry, the thought of actually attending a Pokemon trading card competition is just too much for me to handle without breaking into spleen-damaging laughter.

The point I'm trying to make here is that each group hates each other. Pokemon thinks Digimon ripped them off, and Digimon thinks Pokemon ripped them off. I was content to write off both groups as "helpless idiots" until a gem of a game came along, a title that will undoubtedly unite these two sparring groups together so they may focus their hatred on one single entity. That game is called "BattlePets"

BattlePets is the result of hours and hours of work from the Austin, Texas company Aggressive Game Design, which appears to be rushing all their games out the door as quickly as possible, hopefully before their plea is rejected and the switch for the electric chair is flipped. I knew it was a bad sign when I stumbled upon their page and their motto, "Aggressive Game Designs is hip, now, and wow. We're cutting edge, laser-sharp, and... Ah, who are we kidding! We're just a bunch of gamers! We love making games! Games for all ages. Games you can afford. Games that are fun! Try one today!" jumped out at me like a handful of bloated ticks. "Hip, now, and wow"? Does anybody other than a diseased maniac say such things?

Upon looking through their site, I was shocked and horrified to realize they had somehow built a time machine, traveled back to the year 1992, and stolen various high school midterm programming projects for their own nefarious gain. By using this technology, Aggressive Game Design is able to corner the market on "games that should never, ever, ever be sold in this century", narrowly beating out ValuSoft (who got rid of the "e" in the word "value" so they may pass on the incredible savings to you, the consumer). Not only are the games a few hundred years too late, but they're also blatant derivatives of crappy titles produced hundreds of years before that! For God's sake, check out the page for Astro Rally (yes, that is the actual game running in the background of the screenshot):

Once you've made your cool tracks and racers, feel free to trade them with friends, post them on your website, or e-mail them to us, so we can make them available from here!

First off, NO. If, by some horrible accident, I was successfully tricked and ended up downloading Astro Rally, there's no way in hell that I would actually string together up to seven white lines and make a track for this game. Secondly, even if I suffered massive brain damage from being struck in the head by a particularly large cinder block, I would never release those tracks onto the Internet. That's the kind of stuff that ends up being prime blackmail material and ensures I'll never be able to run for public office.