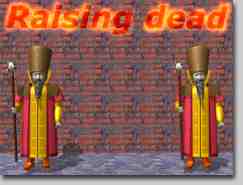 At a Glance: Oh no! The dead, who have taken a break from their busy schedule of "not being alive", have arisen and decided to attack all living creatures around them! It's up to you, the only living creature around them, to defeat the undead by hitting everything in sight with an axe. Raising Dead is a true testament to man's undying spirit and ability to overcome whatever seemingly insurmountable obstacles are placed in front of him. If you are able to play this game without instantly taking a magnet to your hard drive, you too will have overcome a seemingly insurmountable obstacle. 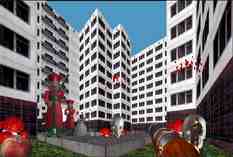 Yes, that is me with a firehose / Civil War cannon being attacked by Chinese zombies and hovering skulls. And yes, those are mushrooms and apples scattered all over the ground for no readily apparent reason.

Once again, I'd like to remind everybody out there that the most damaging and painful things can often arrive in the smallest packages. Remember that movie where the terrorists were able to kidnap a Russian scientist and force him into creating a neutron bomb that fit inside a hot dog cart? Probably not, because I just made that up. If you're interested in creating a movie with this plot (and can get Pierce Brosnan to play the part of "Detective Phillip Monrovia"), drop me a line and we'll talk about pricing.

To get back on subject and temporarily derail me from launching into a tirade about explosive hot dog stands, I'd like to print a copy of the email I received from ever-faithful reader Charles Prinsep (who appears to have been hitting the ol' whiskey bottle before composing this message):

Recently while searching for a cool screen-saver (by cool, I mean involving dinosaurs). Well I found one that exceeded my expectations, from a little software developer calle Gelios Software. Upon going to their URL ( www.geliosoft.com ) I was only a little perturbed by their lack of grammatical structure.

They said this game is like Doom, I would agree, only Doom wasn't really bad and was actually fun with good graphics gameplay sound and weapons! If you didnt catch it before, the URL is www.geliosoft.com. Have fun AHAHHAHAHA

My first clue that this game was going to be an unforgiving carnival of failure and wasted lies was the fact that the title was listed next to a dinosaur screensaver. Now I'm no expert on games, but I'm not aware of any successful gaming companies that are able to produce both quality first person shooters and programs which feature dinosaurs eating and walking around. Actually, I think Adrian Carmack did some work on stegosauruses texturing during Quake 3: Arena's production, but that was just so he would stop harassing all the other team members.

The second thing that alarmed me was the way Mr. Prinsep ended his cordial message to me. "AHAHHAHAHA" doesn't exactly instill the greatest amount of faith. If Mr. Prinsep were an evil superhero or something, I would expect him to flip a switch and launch a series of ballistic missiles after composing this message and pressing "SEND." As it turns out, the link he sent is much more damaging.

Gelios Software appears to have been created by aliens who crashed their spaceship in Moscow, were raised by Spanish-speaking Iranians, and then attempted to translate their website from Chinese to English by a 12-year old French Israeli. The text on their page is bad, folks... almost past Babblefish-esque quality and into a whole new dimension of awfulness. Feast on this, chumps:

Raising Dead is one of Shooting Games. The dead have come back and you have got to defeat them. As in the best old Shooters like Doom, you can play at home or in an office, using easy controls and enjoy colorful graphics!

Many Animated Screen Savers are only a showing of Pictures or flying Shapes with Images.

Click here to Enjoy Yourself and shock your Friends by this virtual Dinosaurs World!

I don't know about you, but when I think of "enjoying myself and shocking my friends", a completely different image springs to mind... and there aren't any dinosaurs involved. Perhaps a midget in a dinosaur costume, but no dinosaurs.

There wasn't much information given regarding what exactly Raising Dead was, so my initial impressions were limited to a blurb of text containing the following:

Raising Dead is one of Shooting Arcades for Windows. Program is a self-extracting executable file approximately 3.72MB in size, so consider this when downloading. Download times of Program at 33,600 will take approximately 20 minutes.

It sounded good to me! I had well over three megs free on my hard drive, especially since I had just finished uninstalling BattlePets, and I assumed I enjoyed "Shooting Arcades", whatever the hell those may be. I had no idea what I was in store for.