Oh, and speaking of bullshit claims on their website, they declare that “The graphics technology of Secret Service Security Breach are superior to any game shipping this year.” Considering the game was released in late 2003, I kind of doubt that’s true. They might want to ask Epic about their graphically superior game that had “2003” built right into the title. And the graphics in Security Breach aren’t just worse than other 2003 games, they’re offensive to all mankind. Every single surface is made of shiny plastic that deforms and warps whenever it moves closer to you. The enemies all race around with a hilarious shuffling ninja run before running within 20 feet of you and spastically swinging around baseball bats while your health mysteriously drops. The textures disappear and reappear with absolutely no warning, and frequently a gigantic white smear will appear in the bottom right part of the screen and obscure a huge viewable area for several seconds at a time. I’m not even going to try to explain that one. 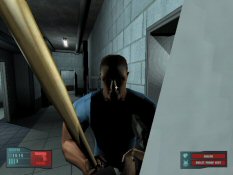 This is how all my nightmares begin: trapped inside a door while a thug with a baseball bat prevents me from aiming at him by snorting my targetting reticle up his nose.The worst part is the shadows and the lighting, which you can tell 4D Rulers is very proud of by simply looking at the unnecessarily dark, shadowy levels. Whenever an enemy walks near a light source, a gigantic, exaggerated shadow will appear on the nearest wall, and the enemy’s face will deform into a pile of skin-colored splotches and pixellated, shadowy polygons. While the framerate plunges deep into single-digit territory, the enemy will proceed to swing around a gigantic wooden stick while massive, pointy black shapes spin off each wall and across every available surface like a black disco ball. The whole game practically screams “Look! SHADOWS! WE HAVE SHADOWS IN OUR GAME ENGINE!” I’ve seen a lot of overused colored lighting in my day, and now that I’ve played Security Breach I can definitively say that black colored lighting is by far the worst.

It’s good that they’re so excited about their shadows, but it’s significantly less good that they spent all their time on shadows and none on AI. The enemies with melee weapons only know how to run forward and swing at you, although it’s pretty cool that they can hit you with a baseball bat from two hallways over, and the enemies with guns only know how to stand still and shoot. But at least this complete lack of AI guarantees that you’ll get to kill lots of enemies, which means you’ll get to hear plenty of awesome speech clips when they die! These include, but unfortunately are not limited to:

Attempting to dissect the game’s inner workings for my own nefarious gain, I poked through the Security Breach directory, and found what appeared to be a server config file. I thought it was odd that a server config file would be there, considering Secret Service is single-player only, but then it all made sense when I saw this line.

Ahh, now the light is shed! Gore was 4D Rulers’ last project, and it appears they simply copied all of their work on Gore and modified it to make Security Breach, and then were too lazy to clean up the stuff they didn’t need. It gave me some fascinating insights on how crappy games are modified and enhanced to make newer, crappier games. As far as I can tell, these are the modifications they made. 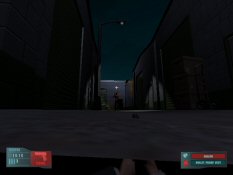 Taylor the human attack submarine slowly swims through the asphalt, waiting for his next victim.

The old Gore enemies attacked by repeatedly shooting and missing, but the more efficient Security Breach enemies repeatedly walk into the wall.

Gore involved chasing down a laughing hacker who could run up the stairs at lightning speed while getting repeatedly shot in the back, but Security Breach is more oriented towards escorting uncooperative VIPs who get permanently stuck behind desks and chairs.

Gore’s levels were completely static, while Security Breach’s levels come equipped with dirty barrels that turn into expanding orange circles if you stab them.

The walls in Gore were content with simply eating your gun, but the walls in Security Breach enjoy your fingers and the starchy taste of your jacket sleeves.

Gore had colors besides black.

Each of the ten missions is more excruciatingly painful than the last, and they combine to form the worst gaming experience I have ever had outside the realm of freeware. This is worse than Extreme Paintbrawl, worse than Daikatana, and worse than every single Deer Hunter title combined. I am honestly amazed that the development team, not to mention the publisher, actually thought this was a releasable game that would generate money for them. My advice to 4D Rulers is to abandon your current financial strategy of actually selling games, and instead focus on releasing more titles like Security Breach. If you piss off enough people with these games, you’re bound to get a few people who are willing to pay $500 for the right to e-mail you long messages about how much they’d like to sodomize you all with a broken beer bottle.