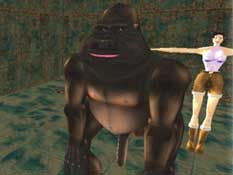 Some of the character models and textures in Universal Combat are simply amazing.

Universal Combat is one of the first games produced solely for sex offenders. For years these folks have been lobbying Congress and other white people who seemed old and important for a game that would make them, registered sex offenders, feel good about the wretched lives they lead. Dr. Derek Smart, who received a doctorate degree in being Derek Smart, heard their cries and spent the last 27 years of his life creating what he felt was an answer to this terrible dilemma. Universal Combat is the culmination of all his work and efforts, and is a truly amazing product when you consider the fact that Dr. Smart did not actually write a single line of code for it himself, instead copying and pasting free Javascript samples from Tripod websites across the Internet. Unfortunately, such a complex and revolutionary product is tainted by a few omissions and errors, which I will cover in this review.

Universal Combat tells the story of Frankie Gumballs, a space mafia crew member who beats women and flies a spaceship composed of liquid helium. Throughout his epic journey across the galaxy, you'll visit and cruelly pummel 36 different species of females, from the voluptuous Rath'agk, to the smarmy and eternally PMS-ing Grou'ageu. Since UC is billed as a "free floating" game, you may choose to tackle any mission you like while freely floating in a room with other registered sex offenders who gathered to play and have sex with pie tins. Combat and travel is not limited to space, however, as you may visit any number of the 40,382,127 planets in the game, each of which has distinctive terrain ranging from "green grass" to "green grass with a hill" to "green grass with a hill and a tree which does not look like a tree but instead resembles another hill." The ultimate goal of the game is to become the universe's best cocaine dealer and deliver your precious cargo of hardcore drugs to each and every planet while ruining as many families as possible and dating pets.

While this may seem like a wonderful premises for a game, there are a few bugs and design flaws which truly limit it from reaching its potential. First of all, the space cruisers which you can purchase contain a number of oddities. Whenever you try to make them move forward, an audio file of Derek Smart singing to his cat plays on your computer speakers. I figured out how to remedy this after an extensive period of time, but now my Windows desktop shows an image of Dr. Smart on a waterslide and I honestly cannot remember putting it there. Another issue with UC revolves around the fact that Dr. Smart refuses to use the color black in any of his titles. When he was convicted of bank fraud and raping an entire petting zoo in 1994, he claims to have personally met Jesus Christ in prison, who told him that the color black would lead to his demise, and instead he should probably use magenta or perhaps burnt sienna. Mr. Christ also told Dr. Smart to eat a lot of Charleston Chews. As a direct result, outer space is completely colored magenta in this game, making travel a real eyesore. You can change the color and tint of space by performing the following commands:

1) Open up and edit the file name "amazonwishlist.htm" in the Universal Combat folder.
2) Find the line labeled "OUTER SPACE SETTINGS - BOY I LOVE OUTER SPACE - DO NOT CHANGE ANYTHING BELOW THIS LINE OR ELSE I WILL SUE"
3) Find the setting below that marked "Bosom Size (I love the ladies)" and change the value to "ape escape."
4) Close the editor and use winzip to open a file named "squares.gop"
5) Replace the file named "coolspace.obj" with a file named "roofingtar.spc" It does not matter what you have in "roofingtar.spc"
6) Send a lengthy telegram to your city mayor complaining about the potholes outside your street. 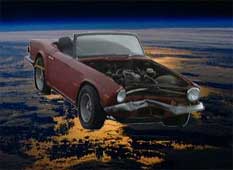 There are a wide selection of intergalactic spaceships at your disposal at any time.

Another slightly annoying feature of UC revolves around the interface, which has thousands of options and selections you can choose from, but only if you have a USB ukulele connected. Dr. Smart wanted UC to be the first game powered by raw sound, presumably so he could engage in a space combat simulation by simply beating Thai prostitutes in the background and having their horrendous cries of pain navigate his ship. I have discovered that USB ukuleles function best in cruising around his wonderful digital world, and you can choose one of over 24,217 different commands simply by playing a designated note. If you are not an expert with the ukulele, do not fear; Dr. Smart has also optimized his game to work with USB sitars and glockenspiels.

In your quest to ingest drugs and beat women, you will encounter many obstacles such as the vicious race of Gey'wogs, a race of creatures who have tent awnings for faces and try to steal your cable television reception if you move in to the apartment next to them. You must find a variety of ways to deal with these foes, from diplomatic measures (offering to beat their wives free of charge) to more violent solutions (beating them with their wives). Once you have conquered or allied with a race, you may begin using their talents to further your space conquest. You can tear their penises off and build an intergalactic bridge with them, then send cybersoldiers marching by the millions over your mighty space penis bridge. Sometimes the game crashes with an error message reading, "email cette page a un ami," which simply translates to "my gigantic head contains ghosts of deceased relatives." After earning an ample supply of money from your trading and intergalactic conquest, you can purchase cruiser powerups such as energy socks, quantum fedoras, hyper nannies, and the awe-inspiring Beef Panties.

To be quite honest, there's theoretically nothing you cannot do in this game. I once piloted my space cruiser, the SS Dirty Sanchez, to the remote world of Mems'agui, where I started up a successful lemonade stand and made millions of dollars through franchise expansion. Unfortunately, the Mems'agui police attempted to arrest me for smuggling heroin in the eye sockets of my white slaves, so I was forced to flee the planet and nuke it from orbit. Later that night, after I had shut off the game and retired to bed, I received a phone call from my mother asking me what happened on Mems'agui and what exactly I was up to there. In shock, I asked her how she found out about this. She explained that while I was playing the game, my every single exploit was being broadcast over CNN for the world to see! I was simply awestruck; Dr. Smart had truly thought of everything while creating this game! And to top it off, my mother's been dead for the past seven years! Is there anything this game can't do? 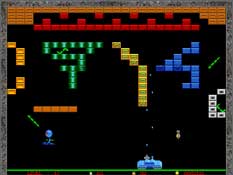 The combat, while visually stunning, may sometimes grow too complex.

I would love to end this review on a positive note, but there are a few bugs that I must address as a patriotic American and a representative of sickle cell victims everywhere. First of all, the game does not function at all unless you install a series of patches ranging from "1.2127.11192 a23" to "BLUE 5 HUT." All in all there are 46 patches required, and these can be downloaded from various Tripod sites which are not limited by their 83k bandwidth cap. Secondly, to activate the game and validate your purchase of it, you must buy a plane ticket for Dr. Smart to come over to your house and enter a secret code while reading you selections from his upcoming novel, "Unicorn Unchained." Then he'll sleep on your couch for around a week and only leave once your food has been eaten. There are various other major bugs in this game as well, including the tendency for your computer to catch fire whenever you go to the options screen, and this little problem where pressing any key results in your hard drive turning off and going to the screensaver, which will be replaced with images of Derek Smart vacationing in Detroit last summer. I have been told there are workarounds for these specific issues on pages 1,273-1,991 of the UC manual, but I was unable to find them due to the fact that the entire booklet was written entirely in ancient Hebrew and contains crudely drawn images of furniture Dr. Smart owns.

So what is my verdict on Dr. Derek Smart's Universal Combat? Well it's a mixed bag; on one hand you have the absolutely most revolutionary gameplay design since the last revolutionary game design Dr. Smart released. You are free to do anything you want and visit any planet in the world, sometimes even more. There are over 19 trillion races of creatures you can interact with, although a good majority of these will hide from you and refuse to be discovered until later patches. Likewise, the space vehicles are plentiful, ranging from intergalactic rowboats to the slow and powerful trans-dimensional washtub. Each of these transportation methods have various drawbacks, such as the ability to only fly into the sun, but you'll undoubtedly have a great time once you figure them out. The various fatal bugs and poorly implemented Comet Cursor code is where this game has issues. Every time you try to get on the bridge of your ship, your fax machine will turn on and begin sending messages to the CEO of Purina, asking him "IF YOUR DOG FOOD IS SO GODDAMN HEALTHY, THEN WHY DID MY DOG POTSY THROW UP LAST NIGHT YOU LYING BASTARD ASSHOLES?" The game manual also suggests you use a seven monitor system while playing, one screen for every woman you can beat at a time. Even then I still noticed graphical errors like poor collision detection when I was caving in my wife's sternum with a chair leg because she was giving me sass. There's also the issue of the game's 18 CD set being less than adequate, as it seems Dr. Smart chose to manufacture each disc from a combination of pressed ham and gravel from his driveway. While I cannot comment on the design behind this, I can say that it caused me a bit of trouble during my review. While I cannot claim nobody should purchase this revolutionary game, I do want to extend a word of warning to any interested parties so they may be aware of the many pitfalls and shortcomings this title possesses. I will, however, say that Universal Combat will undoubtedly appeal to even the most picky sex offenders, wife beaters, and folks who rape corpses.