Nitro Family is an upcoming smash hit first-person shooter from a Korean company called Delphieye, which has now convinced me that South Korea needs to be reclassified as a rogue nation for cyberterrorism against American gamers on our own homeland, assuming we expand the definition of cyberterrorism to include the deliberate propagation of shitty software. The combination of this game and Ragnarok Online has convinced me that North Korea is secretly funding the development of these games as a propaganda tool, since a communist government that won’t let you own a computer starts to look pretty attractive when you realize it means you’ll never have to play Nitro Family. 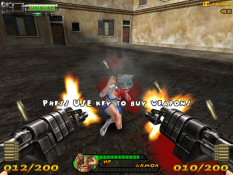 This is my way of expressing displeasure with the weapon girl's high prices.This two-level demo, which still manages to seem too long, shows off both the good (the engine, which they didn’t make) and the bad (everything else). Delphieye apparently decided it was a good idea to license the Serious engine, an engine that’s perfect for battles against massive numbers of enemies in open fields, and use it for boring fights with a handful of enemies at a time in endless cramped hallways. There are a couple large area-style battles near the end of the demo, but they only show how easy it is to come up with an intriguing concept and cripple it with horrible design. How horrible is the design, you ask? Well, it was designed by the people who wrote this.

"Nitro Family" mainly focuses on images of the deepest desires of man like violence, sensuality and beauty, with a pure enjoyment of game. By embodying and mixing those images in non-serious way, players will experience a strange but bright and funny atmosphere like B-movies' unique taste with various of original gameplays which are never seen before in any FPS games.

...oh, well...okay. If you have trouble figuring out what they’re trying to say, and I certainly see no reason why you would, it basically says that the whole demo will be overrun by a completely out-of-place comic book theme. Also note the use of “non-serious”, which is a Get Out of Jail Free card for any stupid shit they want to throw in – when 20 enemies magically pop into existence right in front of your face and start shooting you from inside the floor, it’s not stupid, it’s just light-hearted! 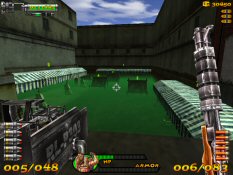 It's sad when you need colored arrows to help you through a jumping puzzle.This terrible design is a shame, because Nitro Family could have been really cool. It’s designed as a dual-weapon first person shooter, meaning each hand carries a weapon that can be switched, fired or reloaded independently of the other. The weapon-sales girl at the beginning claimed that the gameplay is focused around using two guns at once for combo attacks, but I began to doubt the truth of this statement when I realized it was a lie. A combo attack is when you use two different weapons to juggle enemies around – for example, you can launch an enemy into the air with a rocket launcher and then shoot him out of the air with a shotgun. This seemed like a very new and exciting innovation until I realized I’d been doing the same thing for years as a soldier in TFC. The weapon girl told me that I could do combo attacks to earn money to buy her upgraded weapons, but her weapons were overpriced and they sucked, so I skipped them and ordered a Shoot You In the Face With a Rocket, Bitch.

The only three weapons available in the demo are the machinegun, which fires fast but is pathetically weak and never kills anything, the shotgun, which is fairly powerful but requires too much reloading and runs out of ammo too fast, and the rocket launcher, which does a ton of damage and launches enemies everywhere and is basically the only worthwhile weapon. It’s easy to get through the demo if you ignore the combo attacks completely, unless you really enjoy launching a single enemy into the air and shooting him around while the other 19 enemies rush you and stab your face off. All you need to do is launch the closest enemy with a rocket, launch him again right as he lands, and repeat until he explodes into a bunch of juicy giblets that fly a good 200 yards and frequently decide to embed themselves in random objects while spinning.