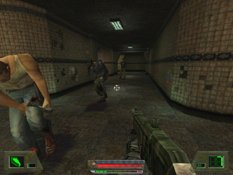 "Free leg injuries to all Neo Nazis, inquire within."You play the role of John Mullins, a "consultant" hired by the US Government to do really nasty jobs that often involve killing lots of people. You are given the title of "consultant" because "professional person killer" would look bad on business cards, and probably be too long as well. The government pawns off jobs to you that they are not legally able to do, then you grab your weakest weapon and head off into battle. I've never understood why, in games such as these, your character has an access to a virtually unlimited variety of weapons yet he always goes over to fight the bad guys with the wussiest weapon available. You'd think he'd at least bring a gun that's as good as the ones the terrorists carry, but no, he has to bring the pistol that shoots out candy and butterflies.

The SoF demo contains two levels. The first mission involves you killing various neo-Nazis who have taken over a subway station, and the second challenges you to disarm / detonate a bomb aboard a moving train. There's also a cutscene with some Russian soldiers getting shot, which brings up one of the coolest aspects of this demo, the ingame cutscenes. Half Life seemed to bring designers attention to the fact that cutscenes could be done really well by using ingame action. Before Half Life was released, game companies were content on making awful quality claymation movies that involved vaguely defined figures running into each other or possibly exploding. Ok, this is an exaggeration, but they weren't generally that good. Although SoF's first cutscene has a distinct "SiN demo" feel to it, they are generally very impressive and well done.

When starting up and playing a game, the first thing I noticed (or failed to notice) was the enemy AI. After bad guys spotted me, they would begin to run around like idiots, into walls, soda machines, and other gang members. Sometimes I would stand right in front of them, and if they were busy holding a gun to a victim's head, they wouldn't even notice me. After freeing a captive civilian, they would run off towards the exit, often trying to go through walls and other solid objects. I assumed it was because they were so scared, but I remember watching "Friday the 13th" and none of the victims ever tried to flee from Jason Vorhees by becoming semisolid objects and attempting to pass through walls. 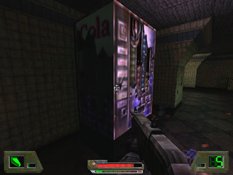 A cool thing you may not notice: this vending machine has six different damage skins.

I do have to admit that the enemy skins, models, and animations are excellent, the best in any game to date. As much as I want to make fun of the GHOUL system for having such a silly name, it is really quite impressive. The motion capture work was done quite accurately and fluidly, as terrorists seems to move very realistically. I just love the models and skinning in this game, from the enemies to the weapons.

Of course I couldn't review SoF without talking about the weapons. Although you apparently can use every weapon in multiplayer, the single player allows you to only play with the default 9mm pistol, knife, and combat shotgun (as well as some other items such as grenades). All of these weapons have been modeled, skinned, and animated very impressively. Well, all of them but the shotgun, which your character reloads at an ungodly speed, as if he just came from taking samples at a meth lab. I'm not going to cover the weapons in the multiplay aspect of the demo, because if you're downloading this game solely for multiplayer action, you should probably stick to UT, Q3A, or that one dinosaur game and have your head examined.

The maps are designed quite well and realistic, although the subway station reminded me a bit too much of Quake 2 (perhaps the texture set or bland color scheme). One of the biggest things this game has going for it is the fact that they're not limited to one particular theme of maps; missions will be scattered across the globe in many different locations and settings. This breathes a fresh new air into the level design and can make the game much more exciting. Unless, of course, the "exotic" locations are bathrooms, sewer systems, and crate-filled warehouses. Then Raven's probably in trouble.

"Soldier of Fortune" seemed to run fine on the Celeron 300 / Voodoo 3 test system I have in my house. OK, it's not my test system, it's my work computer. Fine, it's not my work computer, it's the only computer I have. Have pity on me! Firefights (especially when using the shotgun) could get very laggy and frames would noticeably drop when more than two enemies appeared on screen, but anybody with a decent system probably won't notice this. 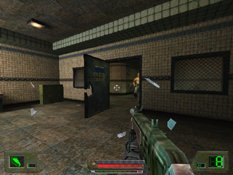 Now for the big question - is the game fun and realistic? To be honest, it was a little of both. It wasn't ultra realistic to the point of "you get shot, you're one dead bastard", but it didn't quite hit the "walk over magic floating bubbles and watch your health rise" mark. The game definitely was entertaining, as I had a blast trying to disarm and maul the bad guys in every possible way I could think of. This, of course, usually just ended up with me aiming for their crotch and firing. Your character can take a noticeably larger amount of damage than the bad guys can, which counts against realism, but if you got shot and immediately killed, where would the fun in the game be? If they had designed the game like that, I guess they could add a "wacky uninstallation mini-game" which would be like Tetris, only with falling body parts. Raven has tried to strike a delicate balance between the realism and fun factors, and I think "Soldier of Fortune" has accomplished this.