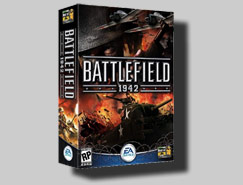 At a Glance: "Battlefield 1942" is a tactical first-person shooter that throws the action of a game like Tribes into the setting of the Second World War. Historical inaccuracies aside, the game attempts to capture the feel if not the fact behind a number of important battles. You can fly planes, drive tanks, and fire artillery from war ships, among many other vehicles and emplacements. For a game that gets so much so right, it's disappointing to find out the things that the developer got horribly wrong. The game is full of technical errors and oversights and since it was published by Electronic Arts you can expect about as much support on these issues as would be offered by a one-legged chair made out of glued-together light bulbs. 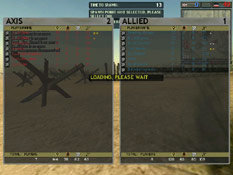 I hope you enjoy loading screens, because Battlefield 1942 has several of them in store for you at every turn!

One of my favorite foods is layer cake. It's sweet, it's complex, you've got the thick icing that makes you feel like you got kicked in the stomach after you're done eating it. What I don't like about layer cake is when you leave it sitting on the kitchen table and then ants come in and burrow into it and make their abode in the center of the cake like some formic gingerbread home. In other words, I don't like cakes full of bugs, and "Battlefield 1942" is a delicious cake overrun with the stingingest bitingest ants you have ever seen.

The game takes place on a number of historic battlefields ranging from the deserts of North Africa to the bombed out cities of Stalingrad and Berlin. You can drive multiple different tanks, or get together with your friends and man a machinegun in the turret while your buddy drives. You can pilot a number of fighters and bombers, drive jeeps, steer massive battleships, and take up the controls of a flak gun to try to drive off those pesky aircraft. Battlefield 1942 is a game with impressive possibilities and freedom within the game's environment of expansive and detailed maps. When I say "the game" I naturally mean the multiplayer game, because this game does not contain a single player campaign. Instead it contains a circus for bots to jump around chaotically doing jack shit while the horribly CPU-intensive AI slows your high-end system down to a slide show. "Crazy" and "Indecisive" are not terms AI programmers should strive to have applied to their work, but Battlefield 1942 certainly deserves both.

While playing the single player campaign - and I managed to get through the whole thing - I was treated to a number of "fun" idiosyncrasies with the game's artificial intelligence. You see the point of each map is to control flags, usually 3 to 5 are being contested and each of these flags represents a point from which your troops can spawn. In multiplayer games this can be a steadily advancing front line or an intense back and forth for every spawn point. In the single player "experience" this becomes you running or driving to each flag, capturing it, and watching in dismay as every other flag is captured by the computer while your teammates walk in circles next to a tank. It's not like the opposing team actually captures the flags either, they just sort of stumble towards them while your teammates enjoy the sights presented by rotating in position or maybe running up to the tank that spawned on top of a building for some reason and then sitting in it motionless.

Other fun AI moments in the single player "experience" include the following: 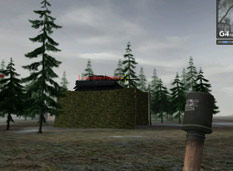 Hey look! A tank ON TOP of a camo blind! Go figure! Also go figure that the computer climbed into the tank and is now just sitting there completely motionless!

The computer really wants to man the machinegun whenever you're driving a tank, but every time it gets in it changes its mind, causing it to hop in and out of your tank over and over until you either leave it in the dust or it becomes stuck on your tank and just stands there on the tread guard confusedly while you drive towards an objective. It will continue to stand there while the tank explodes underneath it from enemy fire.

What the computer utterly lacks in skill and intelligence on the ground it makes up for in the sky by performing pinpoint dive bombings repeatedly on any enemy ground units it spots. Naturally the computer doesn't care about capturing flags, so even if the only team member left is the computer in that plane and the enemy holds all of the spawn points, the computer will continue to bomb mercilessly.

The computer loves to drive tanks. It will take any tank it can find and then immediately drive it straight towards a location where it can jam the tank and effectively immobilize it. The computer is so good at this that if there are seemingly no obstructions around that the computer could possibly jam the tank into, it will team up with other computer controlled tanks and creates a panzer gridlock on a bridge or road. I have had to destroy friendly tanks many times just so one of them could be set free. The surviving computer tank usually rewards my good deed by driving off a bridge into water and exploding or ramming repeatedly into a tank trap and exploding.

Whenever you are in the tank the computer opponent inevitably devotes all of its upcoming spawns to the anti-tank role. Bazookas are great for knocking out tanks but there's something truly sad about driving a tank and seeing five bazooka soldiers running at you down the middle of the road. Usually I will just step out of the tank and easily dispatch them with an assault rifle or even a pistol. The computer never switches to its pistol when you emerge from your tank, content to fire the horribly inaccurate and easily avoided bazooka rounds at you over and over again until it's dead.

The AI is extremely inaccurate with small arms and tanks unless you switch it to a high difficulty level. If you do this the game begins to chug and the computer, while not becoming any smarter really, becomes unerringly accurate.

These problems aside, the heart of the game is not playing against the computer controlled bots; it's matching your wits and skills against an entire team of human opponents online. The multiplayer demo for Battlefield 1942 featured only the Wake Island map and the Japanese and American teams represented within. The demo was relatively stable although prone to lag, but more importantly it was incredibly fun. This demo map catapulted the game to the top of the hype charts and even I was caught up, rushing out to buy it the first day it was available in stores.