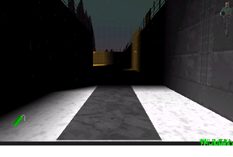 This is what you'll first see upon entering the game. It won't get any better, unfortunately.

As far as I can tell, the plot of "Thundra" is as follows: a couple naked guys in floating UFOs and their terrorist buddies have taken over a courtyard full of walls and disco lighting. It's up to you, as the cyber-mega-ultra-janitor, to run around and pick up a bunch of hypodermic needles and AM radios until you are touched and killed by virtually anything you see. There are four items you can pick up in this game, all of which are equally worthless:

1) The AM radio. I have no clue what they're supposed to do, and the only reason I kept picking them up because I hoped the programmer of the game would suddenly call in and explain why he created such a terrible, terrible game.

2) The hypodermic needle. I don't know what this does either, as I couldn't get the "use" key to work right. I can only assume they're full of pure heroin, as this game obviously reflects some kind of emotional trauma and distress of the author's childhood.

3) The green dynamite. I was able to use these, which explode after being thrown. The only problem is that their blast radius can be measured in centimeters, and there's no way you'll be able to judge how far the dynamite will actually be tossed. The combination of these two factors makes it virtually impossible to kill or injure anything in this game.

4) The flashlight. This made walls (up to five feet away) become brighter. You'll need the flashlight a lot in this game, because 97% of the map is pitch black. The other 3% is some neon color picked at random, with the sole purpose to make you stop playing the game and do something more constructive, like commit vehicular homicide.

Those were all the items I found. The demo doc claimed there was a "Laser rifle", but it also said the green dynamite was named "proton dynamite", so I didn't put too much faith into it.

After picking up a bunch of these vague, pointless items, you'll realize this game has a very "unique" and "distinct" feel to it: your character moves like a drunken, four-ton sperm whale. Every time you strafe, your POV actually leans down toward that angle, as if your character is trying to touch his ear to his shoulder. "Jumping" seems to mean "making a grunting sound", because your character refuses to get more than an inch off the ground. Sometime it doesn't even make the grunting sound either, but that's no big loss. Believe me, you'll be making enough grunting and moaning sounds to cover up any ones your character will create.

Another key "feature" of the control is that you bounce off walls. Try strafing at full force into the side of a wall, and you'll instantly ricochet off as if you were made of rubber. Maybe this had something to do with all the "mystery syringes" I picked up, and I was literally bouncing off the walls. Or perhaps the courtyard I was running through was some kind of vile "romper room gone bad", which would explain the terribly painful lighting.

Speaking of lighting, this game's light engine is just the worst waste of C++ code to ever disgrace a PC. In addition to a complete lack of visible light sources, the stains of light that do exist are so disgusting that you'll wish the entire map was completely dark. Pools of orange swell and shrink like an irritated rash. White splotches of luminosity litter the walls as if some gigantic aliens sprayed graffiti all over them. If you thought anything in "Daikatana" was bad, you will never be ready for the freakshow of "Thundra", which will blow your mind (and many vital internal organs).