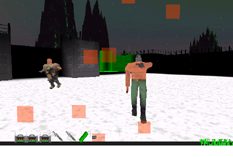 The goofy terrorist and his short, retarded friend run around like idiots while I die.Another convincing argument for a total absence of all lighting is the enemies, which seem to be a "dumbed down" version of the guys from "Doom". They're all sprites, with approximately six total frames of animation. The enemies consist of:

1) Fat, naked man in a UFO. He floats around and shoots a couple hundred thousand exploding bombs at you, which can kill you no matter where you are on the map. Once you've been spotted by the fat, naked guy in the UFO, you're as good as dead.

2) Goofy terrorist. Some clown in a ski mask runs around and tries to shoot you with a pistol. His other arm appears to be a claw or hook or stick or something, and if he touches you, you die. Maybe the stick is electric or cursed or toxic or something.

3) Failed "Doom" Marine. I swear this is just the "Doom" marine animation sprite with a few of the colors and pixels changed. He's shorter than the goofy terrorist, but that's about it.

To battle these nefarious foes, you're given a bunch of ineffective dynamite and a special "punch" attack. You'll have a better chance of sweating out 10 pounds of pure gold than killing anything with your dynamite. As a result, you'll be limited to punching everything you find. Lucky for you, you're able to kill the goofy terrorist and the failed "Doom" Marine with a single hit; the bad news is that you'll never get close enough to pound the fat, naked guy in the UFO. He's bad news, and if you can find some way to run away from him, I'd strongly advise it. Heck, if you can find some way to run away from this entire game, I'd advise that as well. I know I'll spend the next five years of my life trying to forget every laying my eyes upon it. 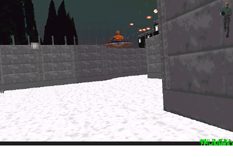 The fat, naked guy in a UFO launches a barrage of nuclear death.

Of course, a game cannot be complete without sound. You'll realize how superb the soundwork in this game is as soon as you start it up and the 1980's themed MIDI-esque music comes blaring through your speakers like an analogue case of the runs. Once you start the game, the music completely stops, and you're treated to the grunting and moaning of all nearby characters. All sounds seem to have been recorded in the programmer's basement, and they consist of him grunting, pitch shifting the voice down four scales, and downsampling it to .03 bit quality. The punching sound effect is simply a sample of the generic "whip crack", and is just the most inappropriate sound for a fist to make. You'll quickly get sick of the explosion noise because you'll hear it repeated approximately 16 thousand billion times in the first minute of the game. The sound, in order to be consistent with every other aspect of the game; just unbelievably awful.

I guess what I'm trying to say is that there's no way on Earth the author was able to pack so much pure, concentrated evil into one tiny 8 meg package without the help of some kind of evil supernatural entity. The fact that he wants to charge $22 dollars for the full version of this game makes me think that perhaps the author should stop abusing the needle and go back to his fulltime job of trying to lure gradeschool children into his "magic van." I have never felt the need for a mental enema more than after this game, and I pray for little grey aliens to descend from their flying saucers, probe me to their heart's content, and then wipe my memory of all events I've experienced this day. Well, as long as they're real aliens and not just fat, naked guys in UFOs. This game is filth and makes "Daikatana" look like a work of genius in comparison. If SA's rating scale went down to a possible -1500, this title would easily get a -1500. Download this game only if you want to quickly knock 10 years off your life; after playing this, you won't want 'em.