I should've known it would be bad when the installer popped up, a simple Visual Basic blob of text upon a neon green background. The helpful introduction read as follows (copied and pasted for your protection):

IF YOU HAVE A PREVIOUS VERSION OF THUNDRA ON YOUR HARD DRIVE, THEN IT IS STRONGLY SUGGESTED YOU EXIT THIS AND UNINSTALL IT. CLICK ON UNINSTALL, AND UNFORTUNATELY YOU WILL SEE A COUPLE OF ERROR MESSAGES, THEN IT WILL SAY OU HAVE SUCCESSFULLY UNINSTALLED, HOWEVER, YOU MUST DRAG AND DROP THE THUNDEMO FOLDER IN ORDER TO COMPLETELY REMOVE YOUR PREVIOUS VERSION. This is something we are looking into correcting. AFTER INSTALLATION HAVE THE INSTALL SEND THE SHORTCUT TO YOUR DESKTOP! Be sure and read the THUNDRA DEMO DOC! You will need the information in order to properly play the game, ESPECIALLY if you have previously played THUNDRA. If you experience any problems, email us at: spungulas@odyssey.net We will get back to you PRONTO! We want you to enjoy THUNDRA! Be sure to accept the default installation directory of: THUNDEMO or the game will not function properly. Thanks for downloading THUNDRA. :o)

So basically you can't really install the game properly and you can't uninstall it properly. We're kind of floating around in video game limbro here, aren't we? Despite these strict warnings IN ALL CAPS, I foolishly proceeded to defile my hard drive by copying the files onto it. If my computer decides to start doubling the amount of gamma radiation it normally emits, in order to shrivel my genitalia in revenge for installing this crap game, I won't blame it. I actually feel sorry for my innocent widdle harddrive. Somewhere, inside my computer, a series of sectors is weeping like Baby Jesus.

Still immersed in a state of ignorance and blind faith, I booted up the game, eagerly awaiting a dose of hot, exciting FPS action. Once the title screen popped up, I almost lost it. Even I wasn't ready for what I would see: 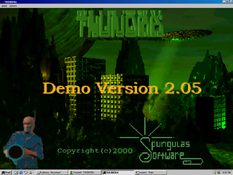 Really makes ya want to download this game, doesn't it? I mean, check out that swank picture! It looks as if a flying turd is shining a flashlight on a series of large blocks while a cybernetic janitor shoves the end of a vacuum cleaner into your face! That's all the elements of a successful game right there, folks! They've covered all the bases, which (of course) are:

Bam, Spungulas Software has just sold 100,000 copies. To whom, I don't know, but I'm sure they'll just sell like hotcakes.

I ran through the options menu, thrilled to find that mouselook is disabled by default. In addition, there are approximately 50,000 different keys you need to bind, and the game won't automatically remap a key if you accidentally bind something to the same key as another command. If you're particularly sadistic, you can sneak over to a friend's computer and bind every single command to the same key. Imagine the look of surprise on his face when he finds out that pressing the "A" key causes his computer to go nuts! He'll probably thank you, because it means he won't have to play this game anymore! Next thing you know he'll put his hand on your leg, tell you he's real thankful, and you'll soon be engaging in gay sex, so I guess you'll probably want to avoid doing this. Unless you enjoy gay sex, that is.

When reading up on the binds in the demo doc, I learned such helpful pointers as "Ins (or 0) = Lower then when you release you jump. (In water this will make you surface or climb out of the water)" This makes sense to me, especially since there doesn't appear to be any water in this game, and I'm sure that if I ever found it, the awkward and stupid controls will cause my character to instantly sink and die within seconds. But hey, that's the mystery of "Lower then when you release you jump", isn't it?

Anyway, after learning I could only use the secondary mouse button for "run" or "jump", I hopped into the game and expected the worst. I got it.