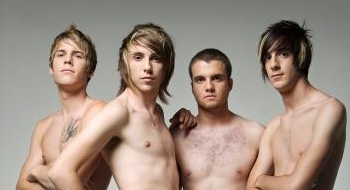 The song "Too Much" repeats the title phrase 62 times, which qualifies as both self-fulfilling and fucking annoying. In addition to too much "too much," Nothing Personal includes too much of the following:

Another aptly titled track, "Lost in Stereo," is so blandly conventional it could make even fans forget it's playing:

"I swore I bought that CD," the vexed teen remarks to herself, while Gaskarth warbles "I'm just like cellophane, 'cause she sees right through me" completely unheard.

"Have you seen my All Time Low CD?" she asks. "I would like to put it in the stereo, which is currently unoccupied."

"No, I haven't," replies her equally oblivious sister. "Hey, did you leave the TV on in the other room? I have this weird feeling I'm hearing the end-credits theme to a sitcom in which high-school kids learn all about how to live and love."

"Break Your Little Heart" offers the only glimpse at a recognizable character. Unfortunately, it's a creepy misogynist. This song, and the "Weightless" video, remove all ambiguity regarding All Time Low's verbally abusive relationship with its teen-girl fanbase. If the band had male followers, one might smuggle "Break Your Little Heart" onto a mix tape as a sweet kiss-off, bro, only to have it fail when the opening riffs send the recipient scrambling for fast forward.

Smug guy: "So, did you listen to the All Time Low song on that tape I gave you?"

Guy: 'Well, here, listen to it now." (*Prepares to enjoy her expressions of shocked realization.*)

Girl: "Fuck, this is horrible."

Guy: "Look, don't pay attention to the music or the singer or the "oh-oh-oh" parts, just listen to the lyrics."

Girl: "'Laughing all the way to the hospital?' Is that what I'm supposed to be hearing?"

Girl: "Um, I think we should see other people." 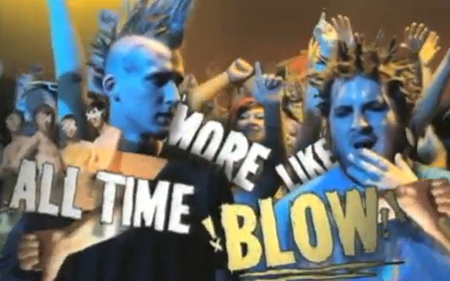 After enduring Nothing Personal, I'm left with two conclusions. Either All Time Low as its fans once knew it no longer exists, its members having been slaughtered and replaced with energetically average simulacra, or the band, humanity intact, has devolved into an amalgamation of everything wrong with pop-punk, emo, and music in general.