Anti-Flag communicates its revolutionary angry-liberal fervor by placing the word "fuck" in front of the many societal ills to which its heroic members feel passionately opposed: "Fuck Police Brutality," "Fuck The Flag," "Fuck The Pope." I must acknowledge the visceral appeal of suspending intellectual discourse to tersely condemn something with no apparent redeeming value. For example, it's tempting to simply say "Fuck Anti-Flag." 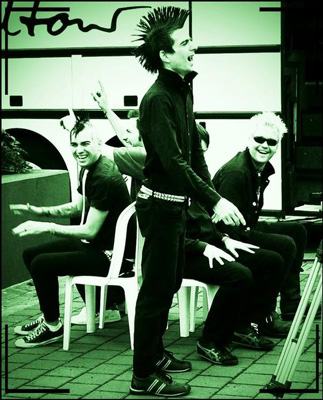 Anti-Flag's midget singer attempts to disguise his stature by spiking up his hair and making his bandmates sit down.When I see someone wearing a "Fuck Cancer" shirt, I don't think, "what a kindred soul, perhaps we can bond on a meaningful level about our mutual disdain for a fatal disease that has affected us both." I think "what a stupid shirt." But if I were to say so, a bystander might counter "at least he's taking a strong stand against cancer, what the fuck are you doing? You probably like cancer, asshole!"

That person represents the typical Anti-Flag fan, a deluded, defensive, immature idealist who is convinced that the only laudable response to the world's most universally deplored phenomena is to write and perform strident, pedestrian pop-punk songs about them.

Anti-Flag has yet to address the polarizing cancer issue, but it does sell a "Fuck War" shirt, with a stick-figure design that illustrates the childish nature of that no-shit sentiment. (Anti-Flag's tour buddies Unseen offer a "Fuck The KKK" model, which, like most things modern punk peddles, would have had a much bigger impact decades ago.) Such merchandise serves the same purpose as the bumper stickers from which Anti-Flag steals its lyrical content: It's how overbearing people misrepresent widely held views as their own daring personal statements.

To call Anti-Flag's aesthetic "fuck this, fuck that" would be an insult to the Sex Pistols, who used that phrase during their timeless abortion troll "Bodies." Anti-Flag has its own abortion song. It's called "No Apology" (because it's not possible to spin "Fuck Abortion" from a pro-choice perspective), and it contains lines like "You can't make it go away, so why endanger womyn's lives?" (Yes, they spell it that way.) Anti-Flag also boasts an extraordinarily gay song titled "Feminism is for Everybody (With A Beating Heart and a Functioning Brain)." The group is trying to seduce the punk scene, either literally with the old sensitive-guy fuck-scam, or figuratively by parroting its prevailing views using the most artless, unsubtle language possible to make sure nothing's lost in the regurgitation.

"Fuck Police Brutality" might be the most useless of Anti-Flag's "Fuck Something" songs, because there's no vocal advocacy for that cause. Police officers who enjoy brutalizing must be discreet about expressing that preference. "Fuck The Flag" is a bit bolder. It might seem overapt, given the band's moniker, but Anti-Flag was careful to clarify in the liner notes to 1999's A New Kind of Army: "Anti-Flag does not mean anti-American. Anti-Flag means anti-war. Anti-Flag means the common people of the world are better off living in unity and peace." The group must have realized that using the less ambiguous, more precise name Pro-Peace would have outed them as fucking hippies. 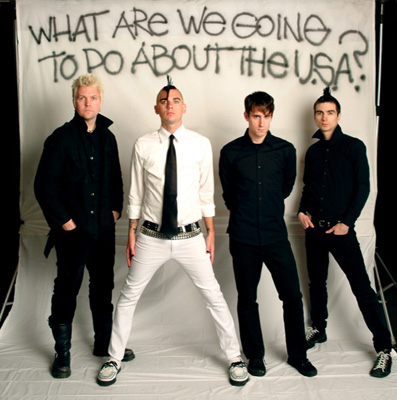 Anti-Flag's just-released record The People or the Gun doesn't contain any "Fuck (Object, Ideology or Entity)" songs, but it does contain the kind of enlightening commentary on the economic crisis that only a 36-year-old man who goes by Justin Sane could deliver. From "The Economy is Suffering... Let it Die": I've seen a lot of bailouts in my life/but where are all the bailouts for the homeless and the poor? "Where's my bailout?": That's a rallying cry sure to resonate with the group's largely adolescent fanbase. Incidentally, a former member of Avenged Sevenfold also used the stage name Justin Sane. Usually all Avenged Sevenfold members should be forcibly stripped of their homoerotic nicknames, but that crazy fucker probably deserved Justin Sane more, given his suicide attempt and all.