The Death of Music Journalism! 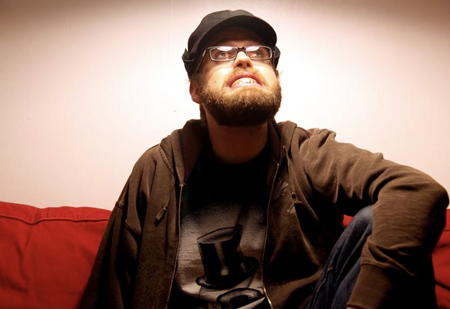 Why let a bunch of blogs tell you what's cool, when you could just listen to this guy?

In the past few weeks, Village Voice/Rolling Stone/every-other-music-magazine-still-in-print freelancer Christopher R. Weingarten made what could charitably be called waves in the music blog world by declaring that he doesn't really like music blogs, because now no one reads his shit. His petulant, profanity-laden rant describes how once, there were music journalists, and they all really liked rock music and they wrote about it, and legions of guys started listening to Led Zeppelin and riding around on unicorns or some bullshit.

His main point ends up being this: Music blogs have destroyed music journalism because music blogs serve as a content delivery system devoid of valuations and more concerned with posting information first instead of engaging it on any sort of critical level. This is a problem because it doesn't necessarily promote what's good, but rather what's already popular, which is the opposite of what rock journalism is supposed to do. It's all over the Web, if you feel like watching a video of a guy standing in a forest trying to tear a single tree a new one.

Weingarten isn't wrong in asserting that music blogs aren't conducive to edifying music discourse. He's wrong when he waxes nostalgic about his imagined Rolling Stone Paradise, in which the Enlightened Rock Journalist guides the unwashed masses into the glory of Great Music. He pretends to the great rock critic fantasy - that he and his nerdy brethren are the great arbiters of rock, the tastemakers. While it's true getting on the cover of Rolling Stone will bring you a bit of notoriety, I'll let you all in on a little secret - if you're on the cover of Rolling Stone, you're already fucking famous. Weingarten goes off on the notion of letting "the great internet hive-mind" run our music taste, and warns of the dangers of listening to anyone except his cabal of geeks, who might occasionally deign to offer relevant current recommendations when they're not assembling lists of "100 Greatest ________s Ever." 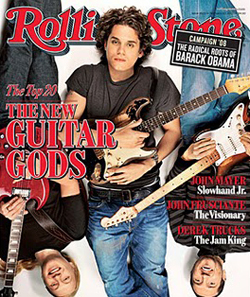 You just can't find this kind of critical insight into unheralded artists anywhere else.

Somehow, Weingarten sees logic in arguing that without big-name magazines using their once-a-month forum to tell us about major-label releases, without listening to the radio or watching MTV, we've lost the ability to discover new music. Music bloggers are destroying our ability to find new things by going out and finding everything and showing it to us. Somehow.

Anyway, these people have nothing to offer, no credentials - anyone can make a blog. Not everyone can write for a music magazine, probably because not everyone can manage to write so much about a concert and still manage to say as little as Spin's Chris Martins:

As the affable singer spent the show beaming out at the audience in what looked like a mix of awe and admiration for his newfound gig, Sublime's notorious rhythm section rocked the same as it always has. Bassist Eric Wilson was a shades-wearing, stoic wall of a man topped off with a trucker hat, and drummer Bud Gaugh sank into his stool, appearing to merge with his kit.

But maybe Martins was given too much space to fill. Maybe what the rock journalism industry needs is brevity. They're in luck. Weingarten believes he's mastered the Twitter review. His latest project, 1000timesyes, has him reviewing one thousand records before the end of the year, and each review has to fit into one tweet. It's an ambitious project, and one that's showing a lot of promi -

Not to say that full-size modern record reviews are much better. Every major music outlet, from Pitchfork to Rolling Stone, uses some sort of rating scale, whether it's stars, numbers, or letter grades, roughly the same system Gamepro used to determine the fun factor of Mega Man 6. The rating system is all about valuation without content. It doesn't just devalue the review, it devalues the music: It says, "Really, this isn't about understanding context, it's about whether it's good or not. It's a simple choice." But it isn't; a music review, one that shows any sort of nuance, is about understanding before concluding, not making a value judgment that can be summed up without words. 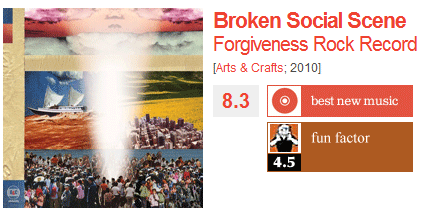 It's funny that Weingarten claims the fact that no one is saying the new Broken Social Scene sucks serves as proof that no one is really being critical anymore. First of all, the new Broken Social Scene is a perfectly fine album, and second of all, Weingarten is a Rolling Stone music critic. The only person who hands out more four-star reviews than Rolling Stone music critics is Peter "I'm still amazed these pictures are moving!!!" Travers, Rolling Stone's film critic. Weingarten is the kind of music snob who is so incredibly textbook I find it hard to believe he actually exists - he hates bands not because they suck (and plenty of bands DO suck), but because too many people like them. That kneejerk reaction, hating a band because, well, someone has to hate them, is just as bad, if not worse, than liking a band just because your best friend called their music transcendent.

The most frustrating thing about listening to Weingarten talk is that he's so fucking close to being right. Music blogs are, for the most part, echo chambers. They don't tell you anything, they just present you with videos of a band's late-night-talk-show appearance and hope that you'll click their link and get them some ad money. Yeah, it's boring and repetitive and doesn't actually have much to do with music.

But neither does rock journalism. Blogs showed up because people got sick of listening to the bullshit these magazines were throwing around, and when people get tired of clicking links, watching videos, and then not saying anything about them, they'll find something else. And by then, we'll have the editor of Stereogum up on stage at some new Twitter conference, sputtering and pointing to his favorite videos, frowning for the loss of his glorious link-delivery system.