In lieu of this month's Metal Hell, I'd like to use this space to honor a man who recently entered Metal Heaven. 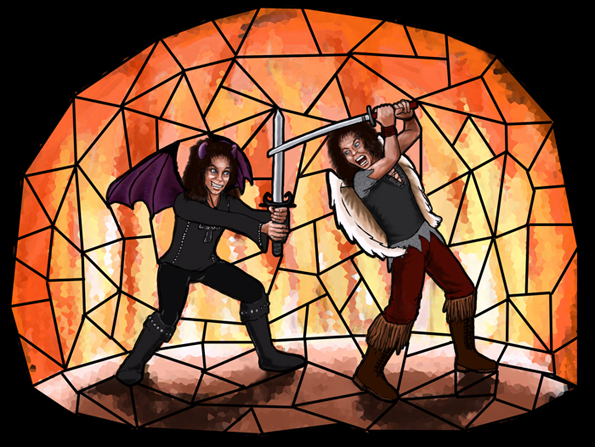 The moon is just the sun at night.

Ronnie James Dio's death marked the passing of not only a legend but also a true believer, an artist so passionate about his singular vision that he didn't change course when cretins started treating him like an anachronistic punchline, or when fewer and fewer fans bought his new CDs. He never "outgrew" metal's fantastical aesthetic: Thirty years after recording with a band named Elf, he released an album called Killing The Dragon. But Dio's work didn't reflect a stunted sensibility; it revealed what happens when an unbridled imagination survives past childhood.

Dio simultaneously embodied metal at its most extreme and at its most accessible. His "devil's midget" appearance and swords-and-sorcery themes opened themselves up to outsider mockery, but the keyboard-padded melodies and the easy-to-grasp, literally black-and-white nature of his lyrical dichotomies made it easy for Dio to convert anyone who gave him an honest chance. Dio songs reached everyone from my dad-rock father to metal-averse girlfriends in a way that Slayer or, say, Funeral Winds could not. Dio once sang "The devil is me/and I'm holding the key/to the gates of sweet hell," and this is how I always pictured him, heavy metal's deceptively charming keymaster.

Dio's voice remained virtuosic, right up to his final release, 2009's The Devil You Know with Heaven and Hell. This made it easier for casual listeners to appreciate his talent, because people always have more appreciation for something they don't consider themselves capable of doing. Metal's recent crop of power-grunters and pig-squealers are easily dismissed with an "I can do that" (they couldn't), but the average guy could never picture himself pulling off Dio's operatic tenor, and he probably wouldn't even try, given that failure carries the risk of violence.

I talked to Dio a couple times back in 2007, when Heaven and Hell was touring with Alice Cooper and Queensryche. Usually, the questions I would pose to touring musicians would deal with their current releases, but with Dio, these interviews offered the opportunity to get answers regarding topics I'd been curious about since childhood. I'm reprinting those pieces, just in case they can provide answers for anyone else. Ride the tiger into forevermore, RJD. 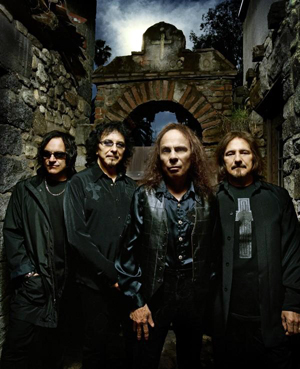 'Sing me a song, you're a singer.'
As a phrase, "heaven and hell" covers more ground than any other dichotomy, spanning from the spiritual playground that lofts nebulously above the cosmos to the torture pit buried beneath the earth's core. As such, it's an apt moniker for a band fronted by Ronnie James Dio, whose polarities-based lyrical approach - the Diochotomy - ranks just behind his popularization of the mano cornuta "devil's horns" gesture as a signature innovation.

The Black Sabbath song "Heaven and Hell," from 1980, contains the first evidence of the Diochotomy. "They'll tell you black is really white," he portentously sang. "The moon is just the sun at night." The Diochotomy thrived throughout the '80s, especially when Dio left Black Sabbath to form his eponymous group. Examples of this flexible construct include "We're a ship without a storm/The cold without the warm" (from "Last in Line") and "Is the wise man always right? No, he can play the fool" (from "Mystery.")

"All these dichotometric - I think I just made up that word - titles and lyrics just make me more of an individual, someone you always know who it is because I write that way constantly," Dio explains. "I like blacks and whites. I like the starkness of them." 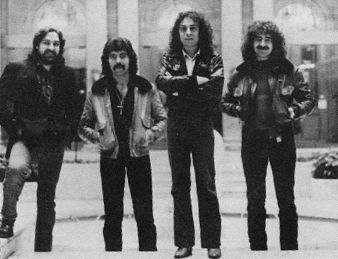 'It's over, it's done, the end has begun.'
"I brought melody and classicalness and a great amount of musicality to this band," he says. "Ozzy began it, and he deserves all the accolades he can get because he helped invent this kind of music. What he did was absolutely right for what it was, but music grew at that point, and I think it grew beyond what Ozzy was capable of giving an audience from a musical standpoint. I've only had one gear in my life, and that was that it had to be great music. It was a music gear. Ozzy had a lot of different gears, a frontman gear and a character gear and a wild-guy gear, whatever that might have been, and that was not nearly what I brought to this band or what I wanted to bring to this band."

After immersing himself in sprightly melodies and synthesizer hooks for more than a decade, Dio could have transformed Heaven and Hell into the converse of Ozzy's oppressive gloom, a relatively breezy, Rainbow-tinted Sabbath. Instead, he embraced the group's classic sound on Heaven and Hell's recent sludgy, keyboard-free studio creations, and he refrained from tampering with his earlier Sabbath material.

"You have to be true to the songs, to what you did before," he says. "If you're not, it confuses people. It's like if you loved an early Mustang or Corvette, you loved it for what it looked like, not what it became."

Even the Diochotomist sometimes sees shades of gray. 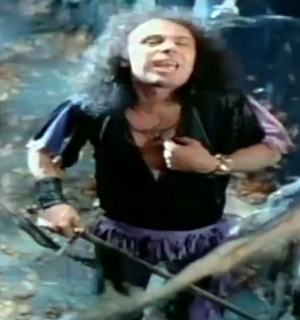 'Silver linings can disappear,but they always shine.'
Garbage Day: In the song "Heaven and Hell," you sing, "The world is full of kings and queens/who blind your eyes and steal your dreams." Are you referring to your music-industry experiences?

Ronnie James Dio: Totally. Those kings and queens are managers and agents, all those people who take the dreams of a musician and say, "Hey, I could make some money from that," so they grab them and stick them in their own pockets. When they're through with them, they wad them up and chuck them into the wastebasket, and there goes a poor musician who has now lost everything because his eyes were blinded by these people who just stole his dreams.

GD: The first song you wrote with Black Sabbath was "Children of the Sea," which deals with ecological awareness. Do you ever interject any commentary about current environmental issues when introducing that song live?

RJD: It's not my job to be a politician, to chastise the audience or the world. My job is to be a singer and a performer. There are times that you write something that means something to you, that has a political agenda that you need to cleanse your soul with. And when I wrote that song [in 1980], I thought I could make a difference: If you're important enough for them to buy your product, you're probably important enough for them to listen to and respect. I learned after doing "Children of the Sea" that nobody gave a damn, so I stopped doing that. I think that Pink song "Dear Mr. President" is one of the coolest things I've ever heard, absolutely brilliant, but I'm not in the game of making those kinds of statements. I'll leave that to Pink, and maybe Tim Robbins, if he put out an album.

GD: Your standing with your peers is established, with metal's biggest names offering testimonials to your influence. Discussing your legacy in terms of your relationship with your fans, of what accomplishment are you most proud?

RJD: I'm very proud of the fact that I made them think, because that's what separates us from some lower forms. We have a language that we thought about and created, and now we can communicate without using arfs and meows. I'm proud of the fact that with what I've done, I've lent myself to that portion of the population that does have a brain, who likes to think and be challenged. I'm not saying that my challenges are anywhere close to Keats or Edgar Rice Burroughs, but in my small way, I've made people think not only about themselves, but also about others and the world we live in.

Thanks to Morgan for the magical illustration! Dio articles first appeared in Orlando Weekly and Riverfront Times.