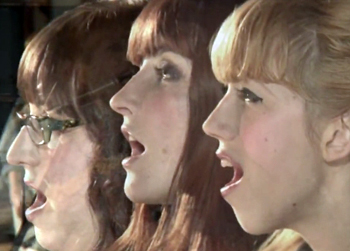 The guv'ners (or rather, gov'nesses) of this particular micro-scene. Weird then, don't you think, that the Vivian Girls are the most punk-orientated of the entire glorious, sun-melted caboodle? (They get the Ramones in a way that no one before or since Shop Assistants got the Ramones.) Or, as one wise man put it ...

"I love the fact that it's hard for people to understand. We've said before that it's always been a great thing to get certain people to go away thinking, 'Oh dear, she can't play the drums!' 'Fine, if you think it's all a gimmick, go away!' It weeds out people who wouldn't care anyway" - Jack White, The Observer Interview, 2004

People get me confused sometimes. I'm fundamentally a fan of music, not of music criticism.

This Velvet Underground song is not a song I would recommend you covering, especially if you're a member of those Californian fucktards called The Like and have no idea of melancholy or depression or the blues except for that one day your mother hid your Tiffany's Gold Card from you, and you held your breath for a whole TEN seconds before she relented and gave it back to you. Thankfully, Kristine aka Tiny Microphone is not The Like and understands that the best time to listen to music like this is when you're feeling asleep and that the best band to come out of Detroit in the past 10 years was not The White Stripes, not even the Dirtbombs, no, but the gorgeous ennui-laden, all-female Slumber Party. 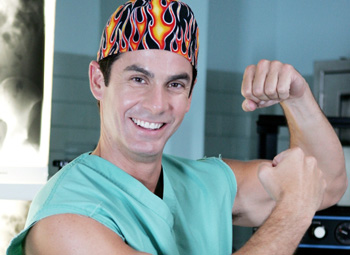 The Hot Toddies are from Oakland, California. No wonder they sing about the Pacific Northwest.

I once spent a terrifying night in Oakland with three chairs wedged against my motel door, but you don't want to know about that. You want to know how it's possible to sound a little like Alvin And The Chipmunks singing The Vaselines or one of those limp-wristed jangle-pop bands, while creating bubblegum pop like the '60s and K Records wrote it - bubblegum pop with a sharp tongue that tells of wet dreams and surf paradises, like the Pink Ladies from Grease reinvented for the Internet age. Every town should have one.

Damn, why did I have to mention Alvin And The Chipmunks? No way are the Hot Toddies ever going to ask my band for a support now.

Just shut up for once, and watch. Pure minimal Laurie Anderson genius.

"[Pythagoras'] basic rules of tone relation are the basis of counterpoint. I follow those very religiously. Those are physical laws of the universe which cannot be altered- that's the way they are and the way that tones and scales are put together" - Moondog, Perfect Sound Forever interview, 1998

"Think about it: what is your job? Truth be told, very few people genuinely give a crap whether you like a song or not. I mean, your best friends might, but almost everyone reading anything you like only cares about whether they are going to like it or not. Your job is to describe it well enough for them to consider whether they might like it. If you say you like it and they like most of what you like, then that makes it easier - just giving a description with no measure of endorsement doesn't really help. The question we ask our friends of anything they've experienced is normally 'is it any good?' That's all: describe; recommend" - Correspondence from an Everett True "fan"

Fuck all the naysayers. This is Plastic Bertrand's "Ca Plane Pour Moi" as viewed through the only filter that matters: punk rock. Lust-Cats Of The Gutters will never be this great again. Their music thrashes all over the place - in a nasty, tinny, tuneful, vivid way - recalling such luminaries as The Raincoats, The Shaggs, Ramones and red-painted broken fingernails raking their way across your back in the throes of passion

Who among us hasn't wanted to be Tracey Ullman wanting to be in The Ronettes at least once in her or his life? 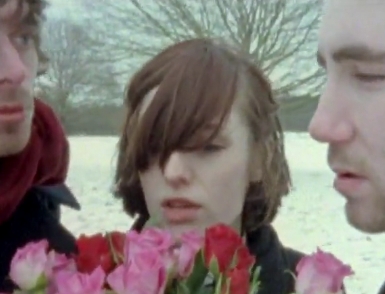 Giving flowers is romantic, unless you took them from atop some stranger's corpse.

"Somebody was trying to tell me that CDs are better than vinyl because they don't have any surface noise. I said, 'Listen, mate, life has surface noise" - John Peel, DJ, date unknown

14. Allo Darlin' - "I Wanna Be Sedated"
See the comments regarding The Velvet Underground above (from the Tiny Microphone entry), and triplicate. Fucking Green Day and U2 and Pearl Jam and the rest of those bloated corporate cunts should be taken outside and forced to snort a truckload of ground-up return copies of Rocket To Russia until they understand this one simple inviolate rule: DO NOT TRY TO COPY RAMONES. If you want to cover them, don't even think about it. Whistle, go limp-wristed, whatever ... but do not attempt to copy them.

Allo Darlin' has a ukulele and the sweetest of female voices, so they're off the hook on all accounts.

Do not listen to this song. Its demand upon you will be insatiable. It will not let you rest for months afterward.

16. Frankie Rose and the Outs -- "On Girlfriend Island"

The exact point where Dum Dum Girls meet Vivian Girls ... which is barely surprising, given that Frankie Rose has drummed with both, and Crystal Stilts as well. Wait... Dum Dum Girls are missing from this mix-tape? We need to rectify that, immediately!

LAST MINUTE ADDITION: Dum Dum Girls play fuzzed-up, blissed-down sun-drenched femme fuzz ... have I used that word yet? ... pop. The ladies understand Joey and Dee Dee because Dee Dee and Joey always understood the ladies. The drum beat is pure early Vaselines, for what it's worth. And the harmonies are pure Lower East Side.