The Gangnam Style Dance Will Never Stop Being News

There's a crazy new dance that's sweeping the internet and taking it by storm! Gangnam Style is a music video by a strange South Korean man named PSY. It has become very popular solely because there is a dance in the song where you hop in place and pretend to ride a horse. Kids these days! 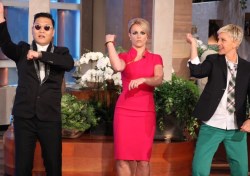 The self-serious PSY (always stoic in expensive shades and fancy clothing) inadvertently made a very funny video. People all over the world thought the horse dance was the most hilarious and amazing thing so they "Liked" and "Thumbs Upped" and "Tweeted" the viral music video on "You Tube". Overnight, the glum chum's hip-hop bragging ballad mistakenly became a sensation worth millions of dollars. Now he's showing up on American television to teach his horse riding dance to celebrities who are genuinely eager to learn.

PSY has taught his dance to people on The Ellen DeGeneres Show, The Today Show, Extra, Saturday Night Live, a Formula One race, and most recently in a concert with Madonna. There's no end in sight, and we're happy to file a report every single time PSY teaches the dance to someone new!

The first round of American Idol auditions have begun for the show's twelfth season. Over ten thousand people stood in line to take their shot at fame, and each and every one of them was joined by PSY as he taught them how to wobble and move their hands as if they were riding horses. What a delight! The first episode of the season featured a seven minute montage of this unstoppable dance craze. Some of the competitors were dressed in unusual clothes. Many cried, retelling the sob stories that made them deserving of the American Idol grand prize even as they danced to Gangnam Style. The best news? This was just the first round of auditions. Over the next month viewers will be treated to more footage of PSY teaching the dance to auditioners. We can't wait!

A dedicated fanbase has been clamoring for more episodes of Firefly for a decade following the science fiction show's untimely demise. Now, Fox has brought the series back. For a Christmas special. In this instant classic, the ship's dysfunctional family rescues a mysterious loner (played by PSY) who has been adrift in space. He repays their generosity by sharing his secret: The Gangnam Style dance. Afterwards, his dark secret is uncovered: He is the evil twin. The good twin (played by PSY) teleports on to the ship and blasts his evil twin, then teaches the crew how to do the Gangnam Style dance.

Jim Morrison's corpse has been exhumed. His wrists and knees have been tied to long segments of a heavy gauge fishing line. On an elevated platform some thirty feet above the grave, PSY tugs on the strings. He is puppeteering the rock legend. He is teaching the dead man how to do the Gangnam Style dance. Row upon row of cameras capture the incredible moment. A legend from the past has been made relevant. Though he cannot speak his gratitude, we know that Jim is up in rock and roll heaven looking down, nodding a silent thanks and tipping his trademark pork pie hat.

Gangnam Style Coming To A Theatre Near You?
News report filed on 6/3/2016 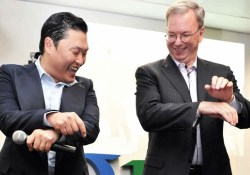 The wacky music artist known as PSY has just signed an unprecedented movie deal with every major studio in Hollywood. The YouTube icon (whose music video has over 35 trillion hits and grows in popularity at a faster rate every day) will now be digitally added to every motion picture that has been or ever will be made, teaching each film's stars how to do the Gangnam Style horse dance. He will tutor a wide-eyed Fred Astaire in Singing In The Rain. The Jack Rabbit Slim's dance competition in Pulp Fiction will never be the same. PSY will even appear in Rain Man, cutting in while Tom Cruise is teaching Dustin Hoffman how to slow dance, showing the brothers how to do it Gangnam Style! What does Dustin Hoffman's character think? Does he love the dance or what? "Definitely."

The government would like to remind all citizens in Region Number One to begin lining up outside their designated Gangnam Style Outposts tonight at midnight. PSY will be on hand to personally teach the horse dance to everyone. Each lesson will be broadcast by the Gangnam Style Channel and its sister station CNN. Failure to appear will result in a revocation of citizenship. Neither age nor health condition will serve as an excuse. If you have already learned the dance from PSY, be sure to present your neck datachip in a non-threatening manner to inquiring government agents.