Normally, I wouldn't bother covering the Jonas Brothers, because it's not sporting to release hunting dogs on a retarded baby rabbit. I focus on bands that mistakenly consider themselves cool, despite being old enough to realize they sound pathetic and look ridiculous. The Jonas Brothers are too young to be self-aware, and their screaming-fetus followers can't be expected to make rational choices, given that they possess only a dim awareness of their own embryonic existence. Let the mainstream media eviscerate this broad target, I thought, so I can warn my discerning readers about the latest ostensibly hip monstrosity. Unfortunately, these critics failed miserably, suffering a crippling bout of musical pedophilia that left them infatuated with infantile pop. 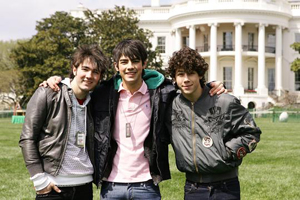 The Jonas Brothers inherit the White House in this sobering image from a fictional world without voting age restrictions.In Hans Christian Andersen's "The Emperor's New Clothes," two scammers convince an idiot monarch that he's wearing an invisible outfit, only to have a mouthy brat puncture the façade. In the Jonas Brothers incarnation of the parable, the mouthy brats can't be counted on for truth-telling, having been lulled into submission by guitar-slinging pied piper siblings. These brothers aren't naked -- that's another bullshit phenomenon -- but they're obviously much less "OMG amazing!" than their prepubescent admirers believe. Yet magazine writers, who should be pointing out the band's figurative nudity, confirm the baby-talk testimonials. They're afraid of alienating the tentatively literate tween demographic.

Entertainment Weekly's Chris Willman conjures a pink elastic behemoth to justify his B+ review of the Jonas Brothers' just-released twaddle A Little Bit Longer, calling the group "bubblegum with some muscle." Blender senior editor (!) Josh Eells gave it four stars, gushing "The Jonases are squishy, vanilla and too sweet. But so is an ice-cream cone. And ice-cream cones are freakin' delicious. Especially when they come with a cherry on top."

First of all, "ice-cream cone" as written refers to the cone-shaped pastry, rendering the "squishy, vanilla and too sweet" description categorically inaccurate. Also, his assumption that a delicacy is defined exclusively by its blandest, most popular flavor option explains a lot about his Jonas Brothers advocacy. More to the point, though, listening to the Jonas Brothers is nothing like consuming an enjoyable, if nutritionally bereft, dessert. At best, it's sugary shit, akin to choking down the excreta of a carny who's eaten nothing but cotton candy and funnel cake. 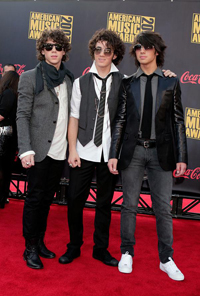 Beware the Baby Strokes.With the appointed watchdogs content to coo at the intruders, vigilante YouTube posters have emerged with a series of "Why the Jonas Brothers Suck" videos, which compare the Jonases' rudimentary riffs to Slayer and Iron Maiden. (The videos also denigrate the group's drumming, but while it's unquestionably pedestrian, the Jonases aren't responsible -- the percussion comes from the back-up band.) While I appreciate the Jonas-bashing sentiments, I don't think it's necessary to use contrast to prove this point.

For example, I only needed to see five minutes of 50 First Dates before assessing it as one of human existence's more toxic byproducts. I didn't need to consult one of the millions of superior films for comparison's sake: I simply watched Rob Schneider don dreadlocks, and Adam Sandler giving a high-five to a vomiting walrus. Similarly, the most effective "Why the Jonas Brothers Suck" propaganda would involve uninterrupted exposure to the group's music. I've endured A Little Bit Longer in its entirety in order to deliver a definitive verdict, just in case any readers had any uncertainties about the album's anti-merits because of all the irresponsible acclaim.

Opening track "BB Good" sounds like Bryan Adams back in the summer of '69, when, as a 10-year-old, he whined a lot and demonstrated limited guitar skills. This tune contains a lot of "we'll be as happy as can be" optimism, inflating a balloon that's just waiting to be pricked by the advent of adolescence. At one point, Nick Jonas speaks the words "I don't want to hurt you," then screams "I wanna kiss you" with deranged fervor, innocently hinting at the type of behavior that usually demands a restraining order. "BB Good" ends with "you're out of control/I think you and me/would make a great couple," and the speaker emphasizes the clumsiness ("cup-pole") of the forced rhyme. Perhaps this whole thing really is a joke, like that group 2gether. The songs would remain putrid even as parodies, but the band's popularity would qualify as a hilarious social experiment. 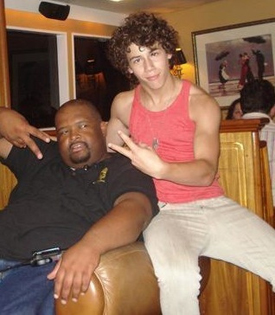 Rob the bodyguard with "AC Slater" Jonas."Burnin' Up" begins with the lines "I'm hot, you're cold," establishing an elementary-school level of discourse that bodyguard Big Rob actually lowers when he starts rapping like the vengeful ghost of Tone-Loc's career. During the video, Joe Jonas stars in a Miami Vice parody called "Hot Tropic," a title that gently mocks a mall store whose angsty patrons might lash back at the Jonases despite their support of equally fruity emo acts. Nick Jonas' throaty vocals recall Ducky's heartbreakingly pathetic "Try A Little Tenderness" scene during Pretty in Pink, if it were an earnest attempt at "soulful" singing rather than a dance routine. Also, with the possible exception of modern-day Muse, no act has employed so much falsetto and yielded so little sexy.

Like their tourmate Miley Cyrus, the Jonas Brothers chronicle their limited romantic encounters for the benefit of their profoundly inexperienced audience. The Jonas Brothers pout "don't take my heart and put it on a shelf," then they complain someone "took my love and threw it on the ground." For a trio of 20-and-under guys, they've weathered a lot of metaphorical heart abuse.

The Jonas Brothers play a brand of power-pop that's always been hideously overvalued, so perhaps these child Emperors are just riding the coattails of Cheap Trick's invisibility cloak. (Entertainment Weekly compares the two groups at length, coming to the indefensible position that both are "excellent.") But giving the Jonases disproportionate credit for playing neutered rock will only embolden future toddler fodder to roam into areas where adults might accidentally encounter them. Kiddie bands should be neither seen nor heard.