When film emerged as the jerky movement of ethereal images, music was there to broaden its scope with the frantic rumbling of a cheap piano. As movies gained a voice of their own, music remained a close companion, taking the form of a sweeping orchestral score, or an excerpt from a pop tune, or even a musical performance by the actors.

Every now and then film returns the favor by elevating a piece of music into something far more memorable than it would be on its own. Consider the torture scene from Reservoir Dogs accompanied by "Stuck In The Middle With You" by Stealers Wheel, or the chilling use of the Jaws theme in Jaws 3D.

Today I'd like to discuss moments where film and music connect in a particularly effective manner.

Citizen Kane is packed with memorable moments. For my money, the most effective use of music in the film is the slow motion shot where Kane stands on the street crying as "Yellow" by Coldplay plays. A bus passes between the camera and Kane, and when it leaves the shot Kane has disappeared. Brilliant.

Drive deserves every bit of praise that it has received. It's a masterful film on multiple levels, including its integration of music. I'm specifically thinking about the sequence where the driver he crashes through an exploding gasoline truck, has someone hold the wheel while he shoots out of the window with an uzi, then jumps off the hood to beat up twenty bad guys in the back of a stolen armored car. There has never been a better use of "Let The Bodies Hit The Floor" by Killing Pool.

2001: A Space Odyssey is one of the greatest films of all time. It's hard to imagine a more perfect combination than classical music by Strauss alongside Kubrick's sweeping shots of spacecraft making their way through the cosmos. Amazingly, that same music is used to a greater effect in the scene from Jack And Jill where Jill is riddled with machine gun fire in slow motion for thirty minutes.

In the final scene of The Dark Knight, Batman sacrifices himself for the good of Gotham city. As he speeds away on the Batbike the emotional impact of his decision is reinforced by Simple Minds' "Don't You Forget About Me", with Judd Nelson nodding to him from a nearby football field.

When Antoine is turned over to the police by his father in The 400 Blows, Truffaut wisely allows the scene to resonate with a spirited performance of "Jailhouse Rock". In my mind, that song will forever be intertwined with the image of Antoine donning a pair of shades and singing into a comb shaped like a switchblade.

"Born In The USA" by Bruce Springsteen was used to great effect in the opening shot of Patton. The backdrop of the flag, the general's buttocks squirming in tight blue jeans with a bandana hanging out of one back pocket. Fantastic imagery tied to a fantastic song.

I'm going to cheat a bit by bringing up the short film Thriller starring Michael Jackson. It is a wonderfully energetic, spooky, and creative take on a zombie invasion set to Bobby Pickett's "Monster Mash". 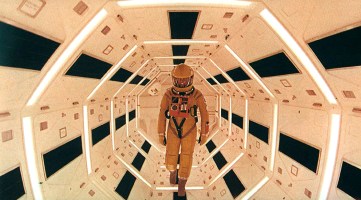 The most hilarious moment in Boogie Nights? When Mark Wahlberg's hapless character heads to the studio to record his original song, "Stairway To Heaven".

Sorry for bringing up Star Wars in yet another article, but this discussion wouldn't be complete without a mention of the scene in The Empire Strikes Back where Darth Vader reveals that he is Luke Skywalker's father. Such a perfect use of the "Record Scratch" track from the Movie Sound Effects Album.

Perhaps this is one is too easy, but the part where Tom Hanks performs "Chopsticks" by dancing on an oversized piano is such an iconic moment in Saving Private Ryan.

Who can forget the scene from Rocky where Sylvester Stallone runs up the stairs, turns around, and raises his arms triumphantly to "Brick" by Ben Folds Five? I certainly can't. Lord knows I've tried.

Blade Runner is one of my personal favorite films, a fully realized sci-fi world with a strong tone that's reinforced by a Vangelis soundtrack. Oddly enough, the standout piece of music is by a different artist. Just as Deckard is saved from a certain plummet off the edge of a rooftop by the replicant Roy Batty, the moment is underscored by "Mr. Roboto" by Styx. As the song continues, a montage of the two characters shows them embracing, going bowling, and flying an origami kite together.