We're delighted to have a very special guest, Hank Williams Jr., answering reader questions for us this week. In all honesty I'm shocked that this came together, but Mr. Williams Jr. seemed eager to participate, citing a need to "communicate directly to the fans following one crazy week full of misunderstandings." Thanks to you guys for responding to our last-minute call for questions, and, of course, thanks to Hank for taking the time to respond.

SA: Our first question comes to us from Kelly in Scotland. She asks "What do you think about dubstep? Is there enough to the genre for it to become more than a goofy - if fun - fad? As a musician, do you feel it's a gimmick or legitimate artistry?"

Hank Williams Jr.: Well I worked with Sting and he was a pleasant man. Can't say enough good things about him. Met through a producer we know, was tremendously excited to collaborate. He ended up getting mad at me one night because I did a skinfart on his forearm (the one he plays sweet bass with) and he put two enormous holes in the hood of my Hankmobile with his chompers. Dude's got incisors like a hippo. Don't fuck with him. 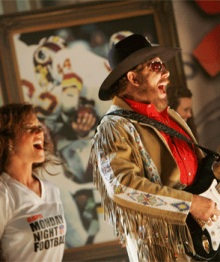 So Sting did good in that and then you have Bowie, now here's a guy that... wow, you know? Bowie's in the muppet movie with the labyrinth. He's the James Bond villain in A View To A Kill. He's in that Twin Peaks movie. Guy's even in Omikron: The Nomad Soul, which is seriously the finest video game I have ever played.

Now Bowie and Sting are on this level. Right? They're on this level and they're in these movies but where does Henry Rollins fit in? That man made some very important contributions to music yet every time I see him on screen I do a backflip. I literally do a backflip because he is that good.

Here's the thing, though. Chris Isaak had his own show. How do you beat that? Technically he's ranked at the top and all the others are way below.

As a musician I just try to follow my heart and let the music come. I don't let the Chris Isaaks of the world intimidate me because I know I will never be on that level. I have to inhabit a level that's shaped like me, and make it comfortable.

If there's someone out there that knows how to fix a stuck door they should make themselves known to me, just stand there and I'll get this Dennis guy to get your email or something. The door to my bathroom is stuck and I have to pee something fierce and I haven't brushed my teeth in like a week. I don't know if you can die from this but my mouth feels like I already did. Ha. That's pretty good.

See, you never know where inspiration is going to come from. Sometimes you compare the president to Hitler then clarify your statement by saying he's "the enemy"; sometimes you decide to sing a mechanical, soulless rendition of something that resembles a song for Monday Night Football.

Did I ever mention how much I enjoy it when we have like twelve drummers and a three beatboxers all combining to create a sound that's eerily similar to a drum machine set on Waltz?

SA: Oh. Okay, thanks. We don't have much room left, but our final question comes to us from Jason in Colorado, who writes "what tto do if girflriend has scratchey neck like smal hairs"

Hank Williams Jr.: Look, I think I was misunderstood. Everyone's getting all politically correct on me here and it's sort of nuts!

Basically, what I meant was that if an Obama plays golf with someone from the opposite political party, that's stupid. The last thing we need to do is see one another as people rather than ideological punching bags. We should all stay very far apart and carry our hatred in our hearts because that's the only way the good guys win. Goodness knows in our world you can't just talk to get things done. A real man doesn't listen to nobody that disagrees with him ever.

The Hitler thing was just an unfortunate thing to say. It made everyone miss my real good point. It's just that I've been thinking about Hitler a whole lot lately, how he's like Obama. I guess it came out at an inopportune time and I'm sorry if any sissies got offended. Gee whiz.