Long ago, Amazon delivered recommendations that were actually relevant to my musical preferences. But when this column started, I began scraping the bottom of the site's barrel. Eventually, my fingernails clawed through the filth-rotted wood and touched dirt, at which point I started inspecting the grubs I found in this disgustingly fertilized soil. Amazon remembers these excavations, and it holds a grudge, which is why I'm taunted by the daily greeting "People Like You Also Shopped For: [The stupidest-looking shit in the world]." I avoided clicking on the unfamiliar album covers that mocked me, til I finally yielded to masochistic curiosity. 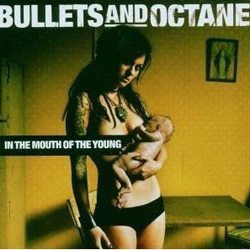 Any moronic band can put boobs on an album cover. In fact, most of the acts unearthed in this experiment elected to do so. But it takes a special breed of asshole to drag an infant into the equation. If the members of Bullets and Octane saw some poor woman discretely breastfeeding her famished baby in public, they'd surely barrage her with quips like "man, I wanna be a kid again" and "pardon me, mama, where does the line form?" Anyway, Bullets and Octane sounds like a generic pop-punk band fronted by an overblown "red-state rock" hick singer who goes by Gene Bullets.

Bullets and Octane, band name meeting:
Gene: So, I've been thinking, we need a sweet name like Guns 'n Roses. Just switch it up a little. What goes with guns? Bullets. From now on, I'll be Gene Bullets.
Brent: Now, to replace the rose -- how about the poinsettia? I heard they're poisonous! Beautiful but deadly!
Gene: Brent, you're so fucking gay, always knowing shit about flowers. Man, fuck flowers. You know what's cool? Cars, man. Like, fucking OCTANE! Strap on your seat belt, oh hell yeah. 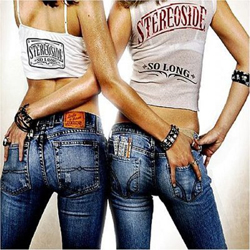 American Heartbreak's moniker screams "emo faggotry," and the music responds "yes, it is I." So, why would people who usually like ultra-macho songs about crazy bitches purchase this heartfelt, glee-club-sings-Mellencamp wimpfest? What say you, Amazon reviewer Justin "Corporate Rockers" Gaines of Atlanta? "Greatest. Cover. Ever." Hmm.

Another vote for the "I buy records unheard cuz there's a girl on the front" crowd: "This HAS to be the sexiest and hottest album cover ever. I admit, that's what attracted me to this CD. I had never heard of Stereoside." So, people picked this up because they became infatuated with an airbrushed-van illustration of denim-clad asses and devil's-horn hands. Assuming they wanted to risk ruining the fantasy by playing it, what would they find? "Husky Toughskin" answers with the least appetizing comparison ever made in an ostensibly positive review: "It's like Nickelback with Aerosmith swagger." Singer Jeff Shields, from Dungswamp, Florida, pronounces words funny ("conversay-shawnnn") when he's not just being retarded ("I'm addicted to your tattoo, oh yeah!") 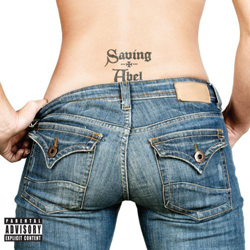 Saving Abel will be forever linked with Stereoside, like sweaty intercrossed arms behind some skanks' backs. This Mississippi-based group even manages to outstupid Stereoside's "Tattoo" with its own "New Tattoo": "I gotta brand new tattoo/all the colors in it remind me of you/the blue is for the bruise that you left in my heart/and the red is for the color we're 'bout to paint this town." Saving Abel sounds like if the Black Crowes inbred for six generations. Unlike the rest of these abominations, Saving Abel attained a depressing level of chart success earlier this year, thanks to a song with the lyric "I'm so addicted to all the things you do/when you're going down on me in between the sheets."

Operator's singer Johnny Strong sounds so much like Chris Cornell that Cornell might sue, if he weren't inexplicably making even worse bullshit with Timbaland. Rikki Lixx quit this group to join Rev Theory, a parallel move along Hell's deepest basin. "I feel like I've received this calling from the universe to save this thing called rock 'n' roll," Strong said in an interview. Answers the universe: "That was a prank calling, you dumb fuck." 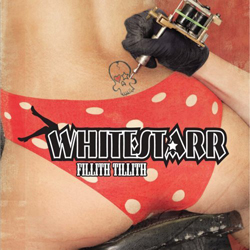 Each of these Amazon selections came with 100 "Customers Who Bought This Item Also Bought" recommendations, lists composed almost entirely of other hair-glam excreta. (Katy Perry was a common exception: Maybe she was a big hit with this genre's enthusiastic "buy it for the slutty picture" online shoppers.) I browsed through the suggestions to see if I could find anything decent in these cretins' shopping carts, and I recovered this meager handful: Testament, Down, The Sword, Death Cab for Cutie (thanks to Saving Abel's mainstream range), Judas Pri- never mind, it was Nostradamus. Nothing led me to Shwayze, 2008's worst album, but nearly every selection offered Whitestarr, which turns out to contain a Shwayze member.

Cisco Adler somehow exists simultaneously in this ungodly "party rock" travesty and the most embarrassing project in the history of rap. Both groups "starred" in reality shows, and while no one watched them, the fact they existed debases television as a medium. Apparently, he's famous primarily for dating Paris Hilton, who, and I would only say this under these dire circumstances, could really do better. If the fucking universe ever actually called anyone to save rock music, the recipient would be tasked with assassinating Cisco Adler.