I haven't seen the first High School Musical installments, because, well, why the fuck would I have? I'm not a prepubescent girl. I'm an old man who listens to black metal. However, reader Y-Hat implored that I watch High School Musical 3, because "it can't be as good as Rotten Tomatoes (67%) says it is." Having endured this travesty, I think 6 or 7 percent would be generous. HSM3's main problem isn't its stupid songs, spastic sub-Breakfast Club dancing or anorexic plot, though all these symptoms certainly sabotage its watchability. It's that it presents such a fantastical portrayal of high school that the little kids supporting the franchise will be ill-prepared for what actually lurks beyond grade-school graduation. To help America from losing an entire generation to death by disappointment, I've reworked some lyrics to reflect real high-school hallways. 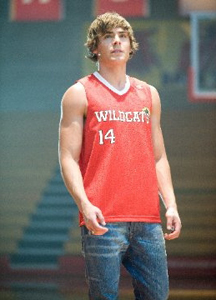 Fixed version:
Coach: We fixed your grades so you could play, and all for what?
So these goddamn East High kids could kick your butts?!
Troy, quit playing like an asshole, or else you'll be disowned
I'll throw all your shit out on the lawn by the time you're home
All this singing and dancing, prancing round like a queer
When you should have been practicing -- it's goddamn senior year!
Take that fucking jersey off, son, you're a fucking disgrace
Chad, wipe that goddamn smile off your stupid sidekick face
All these turnovers and bricks, you all make me sick
If you don't come back and win, I'll kick you each in the dick

Troy, dribbling and singing:
I'm quadruple-teamed, but I'm not gonna pass
Just get out of my way, or you can kiss my ass

East High player, spoken:
Look at this white dude, singing like a fag. No wonder they're getting blown the fuck out.

Troy: Drive into the paint, I shoot, I score
And now it's time to hear from my whore

Gabriella, spotlighted in the suddenly darkened bleachers:
Troyyyyyyyy! Take it to the hoop, please.
And stop fucking all those S-C groupies.

Setting: Troy hosts a celebration party at his parents' place, eventually adjourning with Gabriella to his tree house. As they watch the stars through a retractable roof (the fact that Troy drives a clunky, rusty pick-up truck while pimping out his tree house speaks to misplaced priorities), the couple starts singing a power ballad. 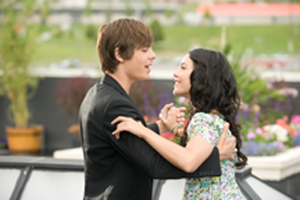 Fixed version:
Troy: Could you imagine if any dream was ours to own?
Can you imagine making people long for Jesus Jones?
Or that song by Van Halen, the one with the dude
Who put up that sign: "Will wrestle for food"

Gabriella: When we are together, it feels like forever
But it wouldn't seem that way, if the songs were much better
Or if I weren't such a goodie girl, always looking so coy
Or if you weren't such a doofus, such a lame little boy

Troy: Baby, next year I'm at S-C, and you'll be in Stanford
I'll be banging Song Girls, and you'll be nailing band nerds
But right here, right now, it's just you and me
So strip down like on the Net, and let's fuck in this tree 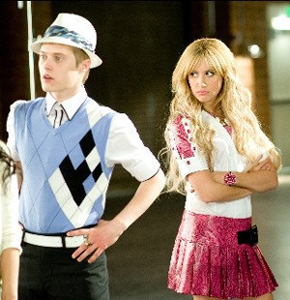 Setting: Pink-swathed pseudo-Plastic Sharpay abruptly serenades her sexually ambiguous brother Ryan in the school cafeteria. (The song introductions in this movie are more jarring than most modern-horror jump scares.) She hopes to convince him of the bright future that awaits them as Drama Club co-presidents.

Fixed version:
Sharpay: Imagine people actually cheering when you step on the scene
Instead of shoving you down and shouting "faggy drama queen"
Don't you want it?

Sharpay: Imagine how your name will go down in theater lore
Like all those actors from plays, who weren't in movies before
Like, there's, no..., wait, but there's Harry Potter, oh, not him...

Ryan: It's so easy to rule when you're in the school play
No one makes fun of a "thespian" or says that he's gay
And if you think that's really happening....
Ha, it's called acting.

Sharpay: But I want it all, the attention and guys
I secretly crave the affection of those I despise
All this bitchy confidence is a shoddy disguise
And this movie is all about lies, lies, lies

Ryan: Um, you lost me there at the end with the skank noises, sis.