And with that, the song pivots, becoming the sort of baroque, genre-hopping gimmick that people who've only heard one "epic" song in their miserable listening lives inevitably compare to Queen's "Bohemian Rhapsody." "Greatest Man," parenthetically subtitled "Variations on a Shaker Hymn," borrows elements of its melody from the religious carol "Simple Gifts," inspiring Weezer to warble like little drummer boys over military-marching-band snare. Choral singing invariably destroys secular songs, from "You Can't Always Get What You Want" to "I Want To Know What Love Is" to "Like A Prayer." "Greatest Man" differs from those examples in that a) Weezer didn't import an actual choir that might have infused the song with "soul," a show of restraint that earns the tune one begrudging positive point, and b) the song died on arrival, meaning the pastoral harmonization isn't the death blow so much as the grotesque posthumous desecration. 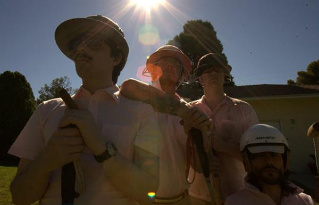 I've only cataloged Weezer's felonies to this point, so before the song reaches its horrifying climax, during which it murders the listener before committing suicide, here's a sequential summary of its misdemeanors:

1:02 - Chunky staccato riffs and shouted group vocals: "I'm the baddest of the bad/I'm the best that you've ever had." This section sounds like nu metal, one of the few vile sub-genres Weezer hadn't yet appropriated for commercial purposes (or, to rephrase that in naive-critic spin, "mocked with sharp satirical verve.") Also, again, ironic arrogance doesn't work in mass-audience communications.

Let's say there's a jovial, quirky fellow who laughs off his many failings with the catch phrase "I'm the greatest at everything." People who know him might find this act endearing. But if the guy, feeling emboldened, gets "I'm the greatest at everything" tattooed across his chest, and if he swears off shirts forever to display his indelible inkings, and if he secretly worked out for months so the words would look extra-impressive across his taut, oiled pectorals, well, any uninitiated observer will think he's a ridiculous asshole with delusions of grandeur, and even his old office buddies might reassess his intentions and his appeal. Weezer has become that guy, and it just doesn't matter anymore that they got the disclaimer "p.s., just kidding" tattooed in 3-point font underneath the garish "greatest" banner.

3:15 - The band attempts a honky-tonk shuffle, possibly an unsuccessful attempt to justify the stupid cowboy hat Cuomo has been wearing lately. Cuomo drawls "Talk smack, and I'm gonna shut up," which won't scare any gunslingers at the saloon, especially with his bandmates contributing cloying "hoo, hoo" vocals.

3:35 - The demonstrative Protestant faction of Weezer's following might recognize the connection between the Shakers' "Simple Gifts" and "Greatest Man": Everyone else will notice how the structure of this chorus differs only slightly from the hooks to "Surf Wax America," "Pink Triangle," and a dozen or so other interbred Weezer spawn. Incidentally, Shakers practice abstinence, sustaining their lineage through adoption, and Cuomo subjected himself to several years of celibacy starting in 2003. If he remains sexless, fuck-talk overtures like that "playin' in your underwear" line add yet another facetious circlet to "Greatest Man." If tree rings denoted ironic implications rather than age, "Greatest Man" would resemble a cross-section of an ancient redwood. 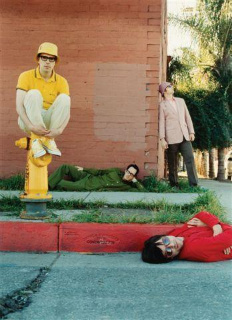 Weezer fails at being a musical chameleon.

At around the four-minute mark, Cuomo starts a spoken aside, which is like a much longer, valedictorian-speech version of his "truth is, I don't stand a chance" confession in "Beverly Hills." Cuomo commences with "somebody said all the world's a stage/and each of us is a player," the wording of which is either another exercise in disingenuous misrepresentation (that "somebody" is Shakespeare, as a Harvard graduate like Cuomo probably knows, but he's trying to retain average-Joe credibility) or an out-of-place academic deconstruction. ("You see," Cuomo says, polishing his horn-rimmed glasses, "that quote existed before Shakespeare popularized it, and the works commonly credited to Shakespeare actually originated from a number of disparate authors, hence the ambiguous attribution." *twirls mustache, patronizingly tips stupid cowboy hat*). Really, I was just surprised that Cuomo wasn't leading up to "...and I'm the biggest playa of all!"

But Cuomo can only go so long before breaking out an incongruous slang expression (here, it's "bodies be all up on my behind"). Ever since that "what's with these homies dissing my girl?/Why do they gotta front?" travesty from "Buddy Holly," Cuomo has used his omnipresent Irony Force Field to sing in ebonics without censure. I'd like to see him picketed, protested and banned from the radio. Not that I find it offensive (on a racial level, that is -- it's plenty appalling on an aesthetic level), but at this point, any trumped-up movement that keeps Weezer off the airwaves and discourages or obstructs the band from future recordings deserves support on principle. 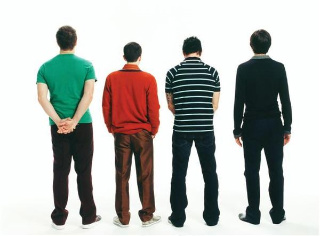 Cuomo baits haters, as he'd surely be quick to dub his adversaries using his urban-slang thesaurus, with this ultimatum: If you don't like it, you can shove it/But you don't like it, you love it. Using the transitive property to assign the value "don't like = love," we get the revised mission statement "If you love (my music), you can shove it," a credo that concisely summarizes this crap-peddling band's attitude toward its fans. "I'll be up here in a rage," he says, concluding his interminable soliloquy, "'til they bring down the curtain on the stage." ("Stage" gets distorted by a cheesy slooooow-mooootion effect.) Cue a cappella choral reprise, trademark Weezer fuzz-pop interpretation of the chorus, and the repetition of the phrase "I am the greatest man that ever lived/I was born to give." That sounds like an epitaph. Please, for the love of fuck, let it be an epitaph.