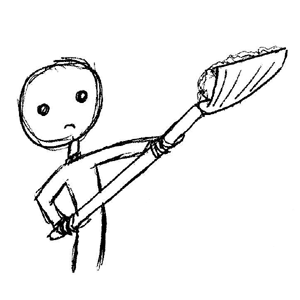 Bartender here. At a restaurant, I start at 20 percent and go from there. I will tip out zero for absolutely horrific service, however.
At a bar, a buck per drink at the minimum. Also, pre-tipping: If you're sitting down for a long evening of consumption at a single place, drop your big tip right at the start. Your bartender will see you first in a crowd every single time.
And to you no-tipping assholes, fuck you. And you'll get your comeuppance one day. I had a weekend at my bar where 147 completely drunken Irish fucks descended upon the hotel (hotel bar, The Irish Cottage in Galena, IL) for a Thursday-Sunday bender that would have made Brian Boru himself say, "Holy fuck." Packed the place (162-person capacity in the bar, and the hotel had other guests too), were loud, boisterous and obnoxious the entire time (the owners wound up buying 30-some guests' meals because of the debacle), and the whole lot of 'em tipped the bar and the servers shit. Five guys drank $330 worth of Miller Lite and Amstel Light bottles, and then tipped two bucks in quarters.
It's people like you guys and those jackasses that make bar rag shots get served. That $12 tip I leave on a $15 bill at the bar across the street from my office is why my wife and I don't get charged for the actual $40 worth of stuff that we get.
fake edit: This isn't up there in FUCK YOU territory, but for all you goons who use the tip to round up to an even dollar on a credit card slip, take a second and think about it. It's not too bad for one or two of them, but during a ten-hour bar shift, when you've got five charge slips in an hour that have done that rounding, that is a fucking shit-ton of loose change that we now have to deal with. Just think about it next time.