A wise man quoted in a signature on GameFAQs once said, "U R not a beautiful and unique snowflake." Whoever this great philosopher might have been, he was obviously keen to demographics. Dividing the population based on a series of arbitrary characteristics is what drives capitalism and politics in the United States. The concept is simple: figure out who your customers are and you can sell them anything. When you have 300 million customers you can never really know who they are or what they want, but thanks to demographics you can just poll them and market research them into different neat groups. That way you can figure out how to convince those groups to buy what you're selling regardless of actual need or desire. 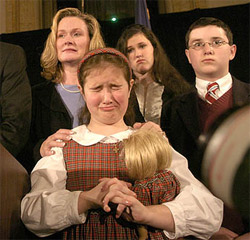 You buy everything. You love electronics and fabric softeners and satellite TV, but most of all you love trading stocks online. You want to use your computer to do everything. You want to bank online, you want to date online, and you want to handle all of your travel and accommodations online. You will probably even buy a car if a mouse cursor flies around the TV screen enough and clicks on things. You prefer to have at least one minority friend around so you don't feel guilty when you throw your 8 gig iPod in the garbage and buy the new 60 gig version.

Please don't be offended, Latinos, but white people buy a lot of salsa so you're going to have to deal with mariachi music every time someone dips a tortilla chip into something red. That's okay, even gringos like us know that you love two things: pickup trucks and Hillary Clinton. Could Hillary Clinton drive a pickup truck? Si se puede! Hey, you guys are doing pretty well for yourselves. Want a loan to buy a house? We've got a great introductory rate. 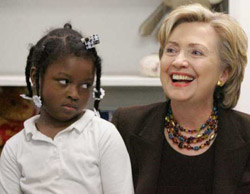 Black people have showed their true colors and turned against Hillary Clinton.Blacks

Yo, what is up, home-slice? Yo, yo, yo. You like hip and in-your-face things. You're the only people still buying beepers. You love nail salons and, we're going to whisper this next part, fried chicken. Man oh man do you love Barack Obama! 92%? That's crazy. Hillary Clinton gets Osama Bin Laden numbers with you people. Oh, dang, 68% of you people don't like being called "you people". How about "urban"? We'll focus group that and see if we can't come up with a better way to dismiss your buying power for big ticket items. Don't hold your breath waiting to see black people in a car commercial.

Yeah, yeah, yeah, over 60% of the world's population. Whatever. You're still just one homogeneous group that can be marketed to by that Cylon lady from Battlestar Galactica. No, the other one. No, not Xena, the other other one. The one that had a baby. Oh, forget it, just go watch Harold & Kumar again and we'll get Best Buy to sell you something your cousins made at 10,000% markup.