Hey guys, what's up? Well, I hate to say it, but one of the institutions of gaming is gone. I am talking of course of Dragon magazine, which was like the gentleman's version of Dungeon magazine. Wizards of the COST decided they didn't want to keep it around anymore so they got rid of it. I know this happened a while back, but I have been on Internet hiatus due to some family issues I don't want to get into right here. The disappearance of this magazine is a sad passing of the ages in the world of gaming. Maybe we need to stop with the computers and read a little more? Would that work? Anyway, I wanted to celebrate somehow, so I thought talking about some of the sweetest cover art would be a good way. 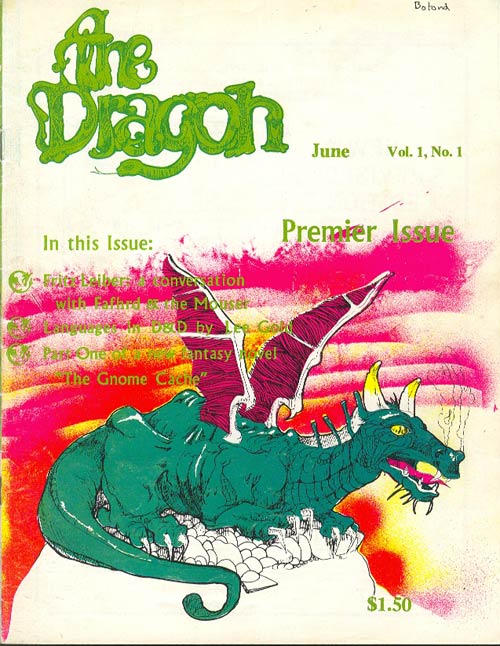 We have to start with the very first issue. This one set the tone and the style for the next bunch of issues with a really sweet dragon with some smoke coming up out of him and then there's red and yellow which makes you think of fire. There's some pink too, which is a little weird, but it suggests maybe the feminine side of dragons. The logo is a classic and then you have some sweet green text which is sort of hard to read but I can make out "THE GNOME CACHE" is one of the article titles and that just makes me want to pick this one up and flip through the pages. What are the gnomes storing? Why is it a secret? How many gnomes do I need to kill to get my answers? I bet the answers are right there in the issue along with some sweet black and white artwork of a gnome holding a pick and maybe looking at a gem. 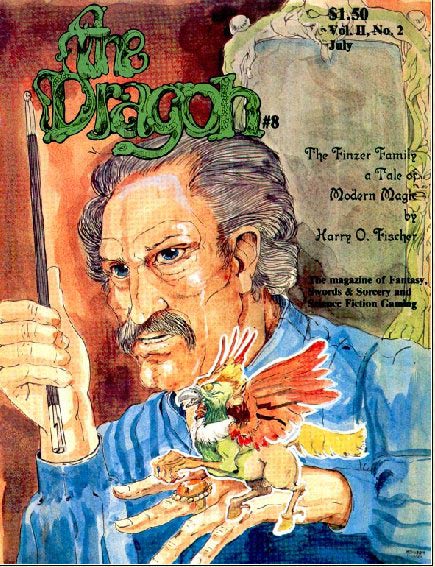 Oh man, I remember my next door neighbor's older brother Darren had this copy of Dragon and it always creeped the heck out of me. It's like one of the pictures from Night Gallery or something. I can almost hear Rod Serling talking like, "A portrait of the modern magician, as cryptic at rest as at work, but entombed in a maze of concrete and steel we find that a little magic can sometimes mean opening the door to that dark thing that lurks at the threshold of the mind. We call this painting, The Finzer Family." I just call it creepy as all heck. And why the little cockatrice? Is it going to eat that tiny Thanksgiving turkey on his finger? 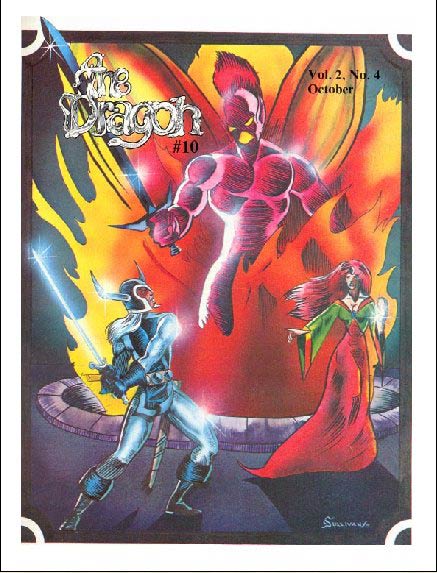 Hell yes! This is where Dragon stopped fooling around trying to be artsy with their little wizard guys in puffy shirts and their miniature cockatrices. This is totally like some of the sweetest artwork I would draw, only way better executed. You've got a bad ass warrior with some of those Robin Hood boots on and some glowing blue armor and he's got white hair so you know he has seen some crap. That is true in all of fantasy art. If a dude has long white hair he has seen some serious crap. Then you've got a hot damsel with some serious wizard sleeve action and she's got a waist just big enough to wear a helmet as a belt. Then like, maybe the dude wasn't an expert at drawing hot babe faces so he cleverly used some shading techniques to artistically hide her face. Then, finally, the magnum opus, you've got this huge ass totally awesome demon springing up out of a well and to make matters worse he has a sword. Look at his haunting pumpkin face and feel the hell-spawned fury that hero is about to battle.