The Amazing World of Counterstrike

Friday, Sep 20, 2002 by Psychosis
The game of Counterstrike is an interesting one. It is a realistic simulation of a terrorist/counter-terrorist combat situation, assuming that real terrorists actually have no intention of carrying out their mission, and instead only want to lure stupid uniformed counterterrorists to various locations and kill them. You see, most terrorists want to blow things up or take civilians hostage in order to scare people, but Counterstrike terrorists are the soft, fuzzy kind of terrorists. They really don’t mind if you walk away with their hostages or defuse all their bombs, just as long as you don’t crouch in one place while you do it. 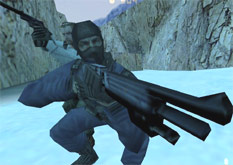 People still actually play this game.Never camp. 'Camping' refers to the dastardly act of staying in one place for more than ten consecutive milliseconds. Should you stop for a moment, or worse, crouch, you will be labeled a 'fag', your mother a 'whore', and your gun a 'noob cannon'. This includes guarding hostages or bombsites - never consider the possibility that a terrorist might not want his hostages to be rescued. These terrorists do not mind successful rescue attempts by their enemies, due to their previously noted soft, fuzzy nature.

Never buy a good weapon. The AW/M sniper rifle, automatic shotgun, MP5 sub machinegun, and any weapons capable of penetrating skin are shunned by all the skilled Counterstrike players. Attacking your enemy from a distance is cheap, attacking your enemy from behind is cheap, and aiming bullets towards an enemy's head will elicit a collective gasp of horror from the entire CS community and their immediate families. The only way to avoid offending the other players is tossing your starting pistol and charging directly at the enemy with a knife, out in the open, without strafing. Of course, you have to announce your presence to the enemy and attack directly from the front while crouching and spinning around in circles, otherwise it's just cheap.

Never accept the fact that you died. Every death should be accompanied by 'WTF' or 'BS'. This lets the other players know that you are not happy about dying, which will dispel their previous notion that you suddenly renounced your evil terrorist religion and raced out into the line of fire to embrace your new counter-terrorist brothers. Always keep in mind that the game hates you specifically, and that it is completely unrealistic that 7 .50-caliber slugs to the head will kill you or have any effect beyond a slight ringing in your left ear.

Always remember that you HATE Counterstrike. Every time something doesn't go your way, be sure to inform everybody that you hate it with creative phrases like "I hate CS", "Fuck CS" or "I fucking hate CS". But never actually stop playing the game, simply continue to comment on how the game you've been playing for the last four hours sucks because they weakened your favorite rifle.

When joining a server, be sure to pick an intimidating name. Having a name like {SuP4hl33tk1LLa}CaP-a-CoP will scare everybody else into dropping their guns and running away when they see you approaching. Under no circumstances should you use any kind of correct spelling in your name, since doing this would imply that you spent some time learning to speak English instead of playing Counterstrike. You weirdo.