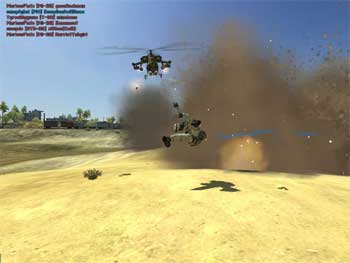 Employ Complex, Advanced Blackhawk Flag Capture Strategies! - Learn to take advantage of the impressive battle tactic known as "flag skipping," where you fly a transport chopper from one flag to the next, capturing them and instantly moving to the next. Don't bother shooting any targets you might see on the ground or following any orders that your squad leader issues; that will just slow you down! If you're piloting as a squad leader, ignore all orders the commander issues, because he's an idiot and has no idea how to play. The goal of BF2 is to take as many capture points as possible while avoiding any form of teamwork, so how could there possibly be anything wrong with flag skipping? It's a great, quick way to rack up points, and as everybody knows, the only reason we were all put on the planet Earth was to earn the most points in Battlefield 2. When your team loses by 100 tickets, you can triumphantly gloat in the fact that you earned more points than God himself. Also, if you're piloting the chopper, make sure to choose the sniper class because they're the best pilots (they have hay and shit glued to their faces).

The Spec Ops Class is Awesome! - As a spec ops soldier, you get the ultimate weapon: C4! Place these little bundles of joy on every single object you can find, such as team vehicles or anti-aircraft emplacements or flags or chairs or other mounds of C4 that all the other spec ops people dumped together to build a shrine memorializing Jim Varney. You can best serve your team by loading your jeep with C4 and driving it directly into an enemy flag. You really never end up killing anybody, but oh boy, it's really intimidating and the psychological damage to the enemy team is utterly priceless. Many people have actually quit and uninstalled Battlefield 2 after being exposed to such a violent, horrific attack! These people are now in mental institutions. Also, when you play as spec ops, you get a red hat which alone makes it worthwhile.

Be Painfully White and Have Your Genitals Lodged In Your Throat! - This only applies to people using the microphone battle communicator. Don't ever say anything useful on the voice com, just suddenly screech comments like "OH SHIT DUDE!" and then never ever explain what exactly you were referencing. Add a little variety to your online performance by shouting things along the lines of "no... watch out for... yeah, there you go" and then follow it up with "no, don't go there, that thing... it's there, go... yeah, no, okay." Don't worry about your microphone being too close to your mouth; people love distortion. That's why heavy metal is so popular.

Intentionally Run Into Your Own Team's Artillery Strikes! - Catch them like snowflakes on your tongue, then punish for a team kill when the snowflakes blow you to hell. If you're really talented, you can step on a teammate's land mine the exact instant the artillery kills you. Perhaps a future patch for BF2 will allow you to punish multiple people for team kills! Also maybe somebody will make a game where you just login and repeatedly press a button to punish other people and you try to obtain the least negative score.

Small Arms Fire Will Eventually Destroy Any Tank! - If you spot an enemy (or friendly) tank, and you lack any explosive devices to take it out, just crouch and shoot your pistol at it until the driver gives up and commits suicide. If you aim at its gas tank, it will instantly explode in a huge fireball, just like in that Michael Bay movie about the virgin clones who pilot flying motorcycles.

Know of any other helpful tips and tricks? Email me with them!