Thursday, Dec 28, 2000 by Rich "Lowtax" Kyanka (@TwitterHasBannedAllMyAccountsEver)
Upon visiting Mexico for the first time, many American tourists become overwhelmed by the diverse and exciting new southern culture. This is not because Americans are ignorant are stupid, but is instead because... well, no, actually, it is because we're fairly ignorant and stupid. However, with this new and helpful guide to touring Mexico, you'll shed those old and rusted chains of idiocy and instead replace them with shiny new chains of idiocy. That's our gift to you, the viewer. You can thank us later, as soon as I find out who "us" is, because I'm fairly certain I'm the only person writing this article. 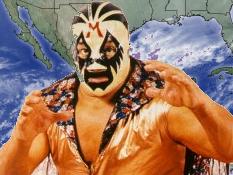 "Welcome to Mexico. You must be broken."

When entering foreign territory, all Americans instantly lose all sense of basic mathematics. This is known as "The Peso Factor", a phenomenon that can cripple even the most intelligent of math professors. If an American notices that something costs 58 pesos, their brain will instantly become hopelessly lost in a daze of converting pesos to US dollars and determining what bizarre combination of paper bills and random coins it would take to cover that price. For example, if an American is getting on a Mexican bus which costs five pesos to ride, expect to wait at least 10 minutes for the American to figure out how to combine the two $2 and one $1 peso to provide the fare. By that time, the bus will have passed his stop and he'll be forced to get off in an area of town where the last American thing to enter was the 1982 Chevy Camaro which has more bullet holes in it than an Israeli church.

Speaking of buses, the normal Mexican bus was built sometime during the 100 Years War and resembles a makeshift vehicle that the A-Team would assemble while trapped in a cave full of metal bars and duct tape. When riding on a Mexican bus, it should make the same noise as a train driving through a 500-ton mound of magnesium, and should feel like you're experiencing a space shuttle reentry through the Earth's atmosphere. Every single nut and bolt should shutter, shake, and vibrate when an errant air molecule collides with the side of the bus. These exciting features are courtesy of the Mexican roadway system, which is predominantly featured in those "after the nuclear holocaust" movies, and explains why everybody in Mexico walks everywhere. And why the suicide rate is so high down there.

If you're touring Mexico and haven't had a chance to learn their language ("Mexican" as many linguistic scholars refer to it), you should speak English with a Mexican accent. Explain to the native Mexicans that you're practicing your English and are secretly one of them (a Mexican). Then they will give you fantastic savings on whatever crap they're selling and will also reveal the fact that the "100% silver" necklace you just bought for 19 pesos will turn into a black lump and give you neck cancer within two days. If they speak Spanish to you and look like they're waiting for a response, just nod your head and say in a very confident tone of voice, "BUENOS COCHES."

Many ignorant "public health boards" advise against drinking the water in Mexico because it is not as refined and filtered as more civilized nations. This is utter nonsense, as Mexican water is simply the water God originally put on Earth for us to consume, without the annoying scientific additions like chlorine, fluoride, zinc, and nobelium. The new parasites and dangerous diseases that fester in every ounce of water are simply things you should get into your system so you can hurry and build up a resistance to it. In addition, the water is full of other useful items which you can pick out and save to make your Mexican vacation even more "authentic", such as: