I Was A Pre-Teen Psychopath (Part 2) 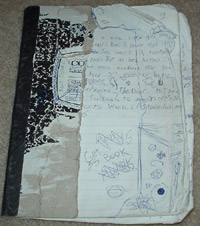 My sixth(?) grade composition book. It contains all the wonderful tales you see on this page. [Click for bigger images]Over three years ago I wrote a hard-hitting SomethingAwful front page story entitled "I Was A Pre-Teen Psychopath." According to Lowtax, this is one of his mother's favorite updates. So I figured I should write a follow-up because I'm lazy and this type of thing is easy to do.

I wrote most of the following material when I was 12 or 13. This is where my scholastic career began to go downhill. Puberty was starting to take its terrible toll. I had peaked in 5th grade, where I was elected class president despite being a huge nerd who wrote about CD-ROM drives and Nintendo games and drew detailed pictures of his computers. Here's pretty much what I looked like around this time period: 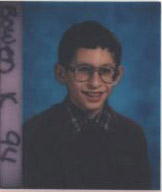 Aww, aren't I cute? Here's the kind of cute things I was writing in my journals. 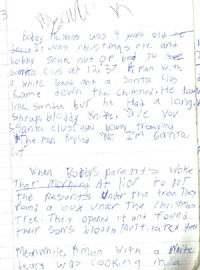 Bobby McNess was 4 years old. It was Christmas Eve and Bobby snuck out of bed to see Santa Clus [Clus = Claus] at 12:37. A man with a white beard and a Santa Clus [suit] came down the chimney. He looked like Santa but he had a long shrap, bloddy knife, "are you Santa Clus?" asked Bobby trembling. The man replied "no I'm Santa Cut."

AHAHHAHAHA, oh GOD. Santa CUT?!? That's TERRIBLE. I'm sure at the time I thought this was insanely clever and scary. And how did I not know how to properly spell "bloody?" Wow.

When Bobby's parents woke that morning at 1:07 to put the presents under the tree [at least I still didn't believe in Santa at this age, I guess]. They found a box under the Christmas tree. They opened it and found their son's bloddy, multilated head.

What a horrible gift! I sure hope Santa Cut left a gift receipt so they could exchange Bobby's head for a less defective child down at the orphanage.

There's more: it's a shocking twist ending that will chill you to the bone!

Meanwhile, a man with a white beard was cooking in a homless kitchen when nobody was around. The bearded man added a boy's bloddy remains in the stew. And he added some blood for flavor. It was the best stew he ever made.

What the hell kind of story is that? What was wrong with me? And what about my poor teacher, Dr. Sherwood: she went to college for like six years to get her doctorate in education. And the payoff for all that hard work? Getting to read literary gems such as these on a daily basis. I know you're dead now, Dr. Sherwood, but I apologize for any suffering I may have caused you.

In another story that is way too long and boring to completely type out, I create a very life-like robot in my basement. I built him in a secret laboratory I hid underneath my pool table, you see. What do I cleverly name this mechanical marvel? Why, "Bob," of course!

The first thing I do once I activate Bob is order him to go to the kitchen and get me a drink. He does. Isn't technology marvelous? Here's what I tell him to do next:

I command Bob for the ultimate task. "Bob" I command "leave the house go 2 miles down the road, get a cab take it to the airport get tickets to Washington DC. Do nothing and say nothing during the trip. Find the White House locate the President and Vice President and kill them by chokeing them. Understand?

"Yes master" he resplones. I follow him to the door and wacth him as he walks slowly down the road.

I am glued to the T.V. And I finlay see the special report about the deaths. I see a live picture on T.V. A Swat team is chasing Bob to the Capital Building. Now is the time I wait till Bob enters the Capital and then I pick up my remote control and press the button. Istants later the reporter screams as masic hydrogen bombs detonas and level everything in a 75 mile radius.

The End. I'm a little terrorist. I wonder if Dr. Sherwood submitted this happy little story to the Secret Service? And I'm not sure if "masic" is supposed to mean "massive" or "magic."

I also dabble in a bit of LiveJournal-esque poetry: 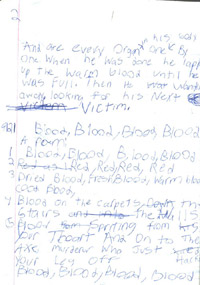 How sweet. And throughout this journal there are random paragraphs in the middle of pages that I just don't understand. Here's an example:

I predict Laurie will be hunt down by angry Hindu shopkeepers. Ben will join with the legion of Slush (the Hindu Nazi Party) to become the mighty Slusticas. When the might[y] Slushtica experiment ends, the hindus will drown Ben in a 50 million gallon tank of slushies.

OK, I don't know who Ben or Laurie are, but -- according to my younger self -- the Hindu branch of the Nazi Party is called the Legion of Slush and instead of swastikas, they have Slushticas. What a fun little tidbit of trivia, thanks for that!

Other stories in this journal include:

An old woman is paroled from prison because "the inmates amount rised" and cleverly tricks some people drinking on an old pier to follow her back to her warehouse headquarters. "She tells them that there is a bar with free drinks and dance and a free car. They were so drunk they belived her and followed." Once they get there, her man-eating rat eats them (although earlier in the story I refer to it as a man-eating mouse).

There's a long like eight-page story about a chainsaw murderer co-starring me. Apparently I turn the tables on the murderer by wrestling the chainsaw away from him and cutting him up myself. Then I start writing about some magical potion and organ transplants... it's all very confusing, but at the end of the story I confront the chainsaw murderer in the hospital and the following happens:

I saw him open the lid of the container [the container contains some magical potion from the Alps] and he was lifting it to his lips to drink "WHAT ARE you doing!" I screamed. "That will Kill you!" He drank and insead of turning into a puddle of sicking slime he grew 40 feet tall and grew claws and horns and blands [I can't quite read my writing, I'm not sure what "blands" is supposed to mean].

"I rebuit [rebuilt] my body so I could resist anyslipe [which is some kind of poison] and use it to make me invinsible. You fool you will be the reason the Earth will be NOTHING!"

Then he pushed a building down with ease on to me. 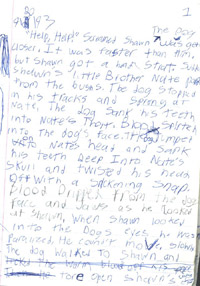 A story where a dog chases down two boys and kills them. Some excerpts:

The dog jumped on Nates head and sank his teeth deep into Nate's skull and twisted his head off with a sickening snap... The dog walked to Shawn and tore open Shawn's chest and ate every organ in his body one by one. When he was done he lapped up the warm blood until he was full. Then he wandered away, looking for his next victim.

Not surprisingly, I'm a cat person.

Only once does my teacher comment on any of this nonsense. It's after the following random passage:

Life: Life is werid like why are we here and what makes life like living and there's life the game that I always crush my sister at because I cheat sometimes and back to life life there is a the fountain of youth and Ren + Stimpy.

Below this, she writes the following bit of feedback and gives me a score of 100. Here's what she said:

Kevin – I think you have found your voice as a writer. Would you like to choose one to submit to a mag?

Yes, that's right, I was actually encouraged to keep writing. You can thank the Western NY public school system.

I wish I could say I outgrew this little phase of writing really disturbing things and grew up to be a perfectly normal, fully-functioning, upstanding member of society... but that would be a huge lie. Hell, I'm responsible for Fireman Comics, and even though those are terrible on purpose, I still -- for whatever reason -- took time out of my limited lifespan to spew them out onto the carpool lane of the information superhighway.

What's the moral of this update? There isn't one. I was a weird little kid and now I'm a weird adult! Oh, and thanks to the Internet, more crap like the junk above is being posted to blogs across the world by thousands of even dumber children than I on a daily basis. Bloddy hell!