LEvi Johnston in full effect son RECOGNIZEWhat in THE FUCK is going on around here?????

Between the time I written my last BS and this time today some pole smokers hacked into Mrs. Palins email accounts. These are top security password encrypted files and some terrorists from some obamna group called anymous used cracking tools and web HTTPs or whatever to open up Mrs. Palins email.

Luckly they just hijacked her family email shit and not her work email shit with all them emails about the money she embestled from the state oil fund. Or the super secret email she got so I could send her pictures of my dick. lmao ha ha only halfway kidding though bros. Mrs. Palin fucking texts me all the time about shit like mondayn shit like what she wearing on them fine ass titties or how me and bristols little retard baby torque is doing.

Anyway is disturbing Mrs plains not even the Veep yet and already people working for Obamna are hijacking into her computer and changing around her emails or whatever. This guy is a total dick. I seen him on TV and thought he was okay (for a faggot) but it turns out he is an even bigger faggot than anyone could have ever possibly even imagined.

Today I am laying the Levi Johnston smack down on this dude. If the secret security and that old monster dude cant stick up for Mrs. Palin than I guess I have to! As the big lebowski always says, "this aggression will not stand!" I have fucked up dudes bare knuckle for doing way less than what Obamna did with the computers and all the BS TV ads he awlays has on.

So lets see how it TASTES Obamna!!! 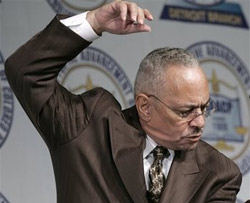 reverend right was basically a crazy dude while obama sat in his churchOWNING OBAMNAS ASS #1 Reverend Right: Did you see that dude? Remember how he was all over shawn hannity's show? Obamna had him as a pastor for like 20 years and that dude was off the HOOK!

He wore a totally messed up shirt and he said all kinds of crazy shit like "president bush" and then he makes a chicken sound and then he says "is coming home to roost god damn it" FUUCK I can't remember exactly, but you get the picture. Fucking hates america totally like Faircon.

Check him, then he had that day where he totally went ape crazy and was clapping and dancing around. It was pretty scary to most people but not me because I have ZERO fear. Not of nothing.

OBAMNA OWNAGE #2 what the fucks a choom?? Yo, CNN or some shit turned up obamnas yearbook so check this shit out: 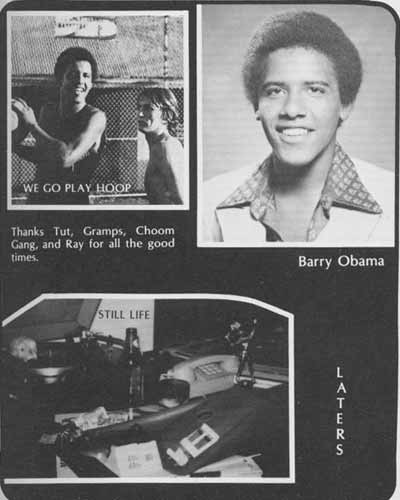 He claims hes in something called "choom gang" I don't know what the fuck that is but it sounds fucked up. Shawn and Big C got into some gang called the iron crosses or something and they road around on ATVs all over but they drank too many redbulls with oxy and big c tried to do a stunt jump off a bad ramp and drove into a frozen lake.

Luckly big c was okay but they had to winch his four wheeler out and he fucked up his leg and had to miss meg kozlowskis party where i got hella baked and got a handburger helper from that foreign exchange girl with the big nose. So in summerty, choom ain't in no dictionary so I don't know why all these hollywood elite call obamna such a smart and tough dude. He's not so tough. 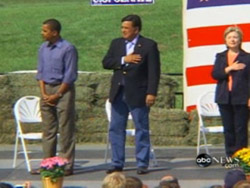 compositionly you might think this picture was about the fatass mexican dude but its about obamna being a douche pipe fyiNUMBER THREE: Doesn't put his hand over his heart during the start of a football game.

Got this one in an email from my dad. Hes on the anchorage rednecks mailing list and tehy got all kinds of good shit about obamna. The liberal media should talk to them.

So obama was at this football game with hillary clinton and that fat ass Mexican dude who always seems stoned and the national anthem started playing and barrack just stood there holding his dick like it was a jo party. Sorry that was meg kozlowskis party like i said earlier RETARDS!!! Ha haha, just a joke that was no jo party she was doing it not me.