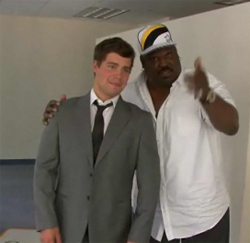 Me an Tank getting ready to make some cutie pussies cry with this Vanity Fair photoshoot.Welcome back to my world, scrubs! Nah, I'm just playin'.

What the fuck is up, n-words? Tank has been training me not to call everyone nigger even though he knows I'm not racist at all. He says people who don't know me might misconstrude me from that statement alone and take me out of contacts.

So I have been keeping up in this 24/7 hustle called life and as you might have heard I have been tellin' all for some tell-alls over at Vannity Fair. Those n-words are my n-words. Believe that. They will pretty much set me up in the Four Seasons hotel and give me party'em money and let me do whatever whenever I got something to say.

I did an awesome photoshoot this time all pimped out Vanity Fair style and then I did some interview shit, you know. Same old same old. Talking trash on the Palins. Not to say none of the shit I said ain't true, just I feel that up in my conscients because I live by two rules in life "bros before hoes" and "don't be a snitch."

One thing I said that is causing all kinds of controversy is some shit about Tripp and Trang.

Sarah told me she had a great idea: we would keep it a secret-nobody would know that Bristol was pregnant. She told me that once Bristol had the baby she and Todd would adopt him. That way, she said, Bristol and I didn't have to worry about anything. Sarah kept mentioning this plan. She was nagging-she wouldn't give up. She would say, "So, are you gonna let me adopt him?" We both kept telling her we were definitely not going to let her adopt the baby.

Of course that is 100% true because I never lie. EVER. People don't believe that, but it's like one of my main super powers. I went out with this one girl who was hot as fuck but she had this big mole on her earlobe. Like, it wasn't even just a big spot, I could hang with that, it was one of those big witches moles that like grows a hair and eye of newt and shit. 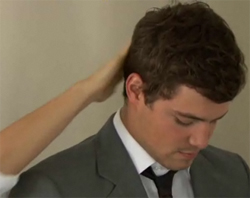 Gay dudes kept touching me, which is normally beating time, but in New York you got to chill out cuz like 75-85% of people are gay dudes.So we go out to Pasties this spaghetti restaurant and all I could look at was that fucking ear. And finally she was like, "Levi, are you staring at my ear?" and what the fuck am I gonna say? You can't sugar coat that shit you got to just lay it out there. I said, "Fuck yes n-word, I am looking at your huge ass mole on your ear like some sort of devil cancer tumor coming out of your witches brew ass. Holy shit shoot that fucker with a laser or a magic missile or something. At least put a fucking band aid on it. God damn."

Needless to say she did not sample the Johnston Family Chowder that night, but her loss, right ladies?

So anyway, getting back to my unadultering truth I am laying out there, of course some snippy little caaaa-hunt named Meghan Stapleton who I guess is now the "Palin family spokeswoman" whatever the fuck that is decided to dump some bullshit to the associate press.

"It is interesting to learn Levi is working on a piece of fiction while honing his acting skills," Palin family spokeswoman Meghan Stapleton said in an e-mail to The Associated Press.

Yeah, okay whatever Meghan Stapleton, I looked your picture up in Google image and you look like Commander Data from star trek. So get your logic or whatever out of this shit put in some chip or something that makes you loosen up and get some beef stabs in that sealed up mummy tomb you call a pussy. I just get the feeling your sour grapes boils down to jealousy.

Anyway, that shit I said ain't even the half of it, because as some people are extrapulating I was also implying as to the origins of my big son Truck, who as you may know there was some wild conjections about his origin on the blogso whatevers. Fucking legal talk got me thinking like a lawyer LOL. Tank needs to stop showing me so many contracts. You know I'm gonna do a rootbeer commercial? So he says. So he says.