Creepy anime girls with glowing swords? Sign me up!In this age of online gaming, every company seems to try and set it's lame MMO from every other lame MMO. In COOLHOUSE's case, it steps up the creep factor with giant 3D anime girls. Now, before I get down and dirty with this undoubtedly horrible game, I would like to be well educated in all things Gekkeiju Online.
Some of the features include:

Oh boy this sounds like fun! I can have a boat and then get married to some creepy anime doll with a knock-off light saber! I just hope these 3D graphics and sounds are top notch and make my gaming computer come to a crawl.

In this day and age, graphics really do make some games great that would otherwise be an abysmal failure. However, for Gekkeiju Online, that is not the case. I think this game would have been better off just a regular MUD and restricted to a dark chat room that no one would have to look at except overweight ham beasts sulking in a basement while watching reruns of Cowboy Bebop or whatever cartoon makes them hard. 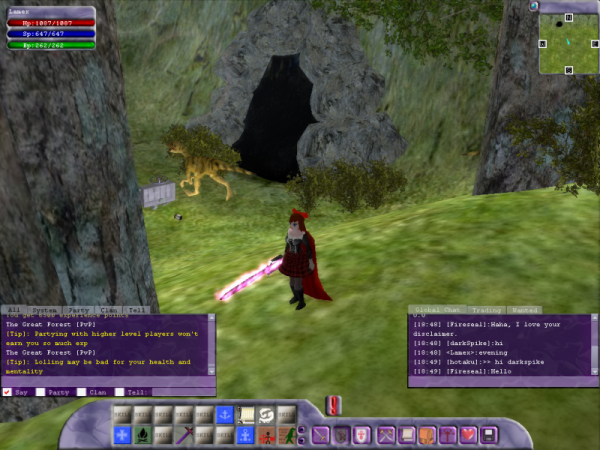 There are only six screenshots on the game's official page and all of them have the same creepy girl with a glowing sword but in a different cliché anime outfit. Maybe it's one of those "beauty is not on the outside" kind of games and it has some really solid game play. The good people at Coolhouse created their very own Wikipedia for Gekkeiju Online. They also described this game as a "3D MUD".
Gekkeiju Online's Wiki describes a 3D mud as, "3D MUD isn't really an official definition but it's the only one really suitable for some Online RPGs." I guess this is a lot better than calling it "IRC with shitty anime." However, it does not really tell me what I am in for. In fact, this wiki doesn't tell me much at all. Screw this wiki and screw learning about this game ahead of time. The only way I am going to really experience the game is to play it; so let's sign up and get it over with!
Previous More MMO Roulette Next