The GUI is the best part of this game. No, really. 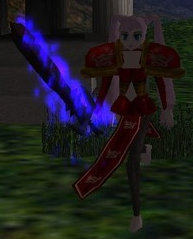 Obnoxiously Anime!To say the interface art is laughable would be a complement. If they were going for the "five year old on medication" feel, they nailed it. My favorite part of the interface is that it appears the creators of this game tried their best to find the most incompetent art designer on the face of the planet. I understand that they aren't a "professional" company but they could try and not make it look like any hack with MSPaint could do a better job with their eyes closed.

I didn't see anything overly obnoxious in the character creation for hair designs. In fact, it was pretty bland. No super Goku hair or anything like that. I didn't try out the skinny female hair styles, so maybe that has more variety to look like a complete jackass. It is pretty ridiculous that every single screenshot I found was of an anime girl in a skimpy outfit. How could anyone ride a horse when dressed like this? Hell, how am I able to attack giant snails while only wearing a mini-skirt and stockings? The only way I could possibly get a greater taste of anime is if Naruto shot a steaming load into my mouth. 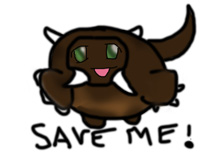 I would want to be saved too if I were stuck in this crappy gameI don't want to know how many snails (that lost their shell) I have to kill before I can get a sword twice the size of my character that glows brighter than the sun. Hell, I think the server crashed because I killed so many damn snails. Now I am just bitter and annoyed that I am waiting for these guys to restart their server just so I can go back to killing shell less snail after snail.

When I was in the server, I did manage to pick up two quests. Thing is, I couldn't actually do them. One had to do with ogres (that made me into bacon) and the other one I didn't pay enough attention to because I was too busy laughing at the "change target" button on my interface.

Once their server finally popped back up, I took a peek at their forums to see more of the community that didn't seem to exist in the actual game. I think the fan art section surpassed the game in looking like some late night Cartoon Network show had puked on my monitor. I now understood why no one cared that the GUI looked like something I could have drawn in first grade.

This man has some educations.I then spent the next hour killing hundreds of snails. One of the other players couldn't handle the pressure and pretty much went insane. There were a few more arguments about who had more "levels of education" but eventually everyone made up and were friends again. However, I had no time for idle chat if I were ever going to get some fuck-me pumps and a tube top to drop.

It also is worth mentioning that after you kill something in this game, giant red text pops up demanding you bury it. If you decide not to bury something you kill, it will come back as a zombie and butcher you. So not only do you have to kill hundreds of snails, you also have to bury them afterwards.

I found a cave and decided to venture forth into the great unknown. About four steps in I was slaughtered like a pig again and found out that my character does not care much for underwear. After seeing my character's gorge-like ass crack, I decided enough was enough.

After playing this game I don't think I will ever look at an MMO the same again. I also will never be able to vanquish the image of a poorly rendered chunky anime ass flapping under a tight miniskirt.