Thursday, Oct 11, 2007 by Steve "Khad" Grant
When most people think of college, they think about learning, exams, and getting drunk. However, in Malaysia, college is filled with hooligans brandishing chains and people smacking each other with gigantic swords. I have never been to Malaysia but I am told by the creators of Ran Online that the game is so accurate that it could pass as virtual reality. In fact, it is their most important feature.

This and other features include (copied directly from their features list):

They may not have boats or weddings but I always wanted to try virtual reality! 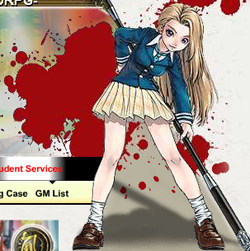 Oh no! The baby!When first visiting their site, you are greeted by a woman bent over with blood splattered behind her. She seems pretty happy about it so I figured that she didn't want the baby anyway.

The website is littered with broken English, flashing banners, and giant buttons. Apparently the back story of this game is that some evil force took over the world and created four colleges. You are a student in one of the colleges and have some sort of evil gas brewing inside of you. However, you are waiting to expel this gas and are "just training," waiting for something big to happen. By "just training" they mean grinding on dumb looking gang members with chain whips until you can afford something other than a wooden stick.

Signing up wasn't very hard, however there must be a trend going on in Asia with obtaining social security numbers or driver's licenses for player support. I am not sure why they need to know these things to help me with problems, so I just put their example number in the box and it worked like a charm. They also wanted to know my skin tone but they didn't have "pasty white" so I had to settle with yellow.

Humor is important for your forum signatures!I thought the broken English was bad on the site until I found the forums. I am not exaggeration when I say every single post on their forums looks like this or this and they all have equally obnoxious signatures that take up four times as much space than their actual posts. To my surprise and disappointment, there wasn't a lot of fan art or crappy comics on the forums. In fact, I could only find two drawings by the some guy with an out-dated scanner. The screen shots I saw didn't really give off a "virtual reality" feel as one was of a giant angry nurse and the other of a knock off ghost buster. Over the next hour of reading nothing but posts like, "LOLZ XD.. i knw thats wht ur gonna say all da time anyway.. dream need ur pic for da comic neways zz =.=" the client had finished downloading and I was now about to finally experience virtual reality!