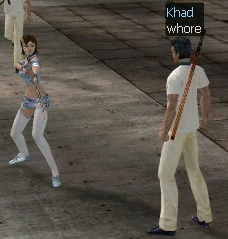 This isn't what it looks like.I gave the quests another chance and found the sword trainer. He, however, seemed to have as much a problem with these quests as I did. Disappointed and confused, I wandered back outside to resume killing hundreds of gang members.

However before I could take four steps outside, some guy challenged me to a duel. I figured I could show up all the hot chicks played by other guys with my stick swinging skills. However, he was about 400 levels higher than me and killed me in one hit. I was humble about it and declared that it was a good fight regardless of the outcome. The jerk then taunted me by trying to give me things I couldn't even use!

I sulked off and found someone else and tried to greet them, however the word "hello" is partially censored. Finding that odd, I continued to type in every cuss word I could think of to see what was censored and what was not. Oddly, no racial slurs were censored but "tits" was. "Faggot" was censored but "Fag" was not. In the process of my experiment I accidentally called someone a whore as they walked by. Here is a table listing some of the words that were censored and others that were not:

I tried to mend my ways by making some friends on campus, but people were far too busy to talk to this sailor. Tired of being a reject at Phoenix University, I tried to visit one of the other four schools in the area. However, when I clicked on my golden golf cart of freedom, my character became stuck and could no longer move.

Ran Online has taught me that Asian college is a time of loneliness, hooligans, and people with gigantic orange swords.