Thursday, Oct 11, 2007 by Steve "Khad" Grant
Virtual reality isn't all it's cracked up to be. I was expecting to be blasting people on Mars like Arnold, but instead I was some sailor with a kendo stick.

The character customization was very lacking. You don't really get to choose your gender as it is determined by what class you are. I wanted to be a kick-ass archer but since it can only be played by chicks and I am sick of wearing mini-skirts, I decided to go with SWORD MAN. Even that name is misleading though, because I didn't even have a sword.

I got a degree in kicking balls.I started in the quad of the deadly Phoenix School of teaching. It was the most unattractive college quad I think I have ever seen. Almost nothing but concrete everywhere but they did get the crappy art part down. There were giant statues with "E=MC2" and a ton of garbage around them. The quad was also filled with people that walked around like they had a severe case of herpes and were wielding awkward steel chains. I found that if I hit them from behind, I would always miss. You basically have to run in front of them and hope they don't turn around so you can smack them with your club of pain. They never use their chain whips but they do go for kicks at your character's crotch.

There are other enemies further into the quad that don't mess around with the deadly art of sack kicking. I found some bimbo that was either smacked around or had on way too much eye-liner. After she kicked me into submission, my character slumped over and impaled himself with his wooden stick.

I had to teach these hooligans a lesson but I wouldn't be able to do it with my crappy stick. I jumped in a buggy and was teleported to the market just like in real life. I was unable to find any 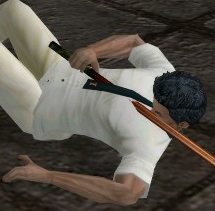 Death is not comfortable.thing I could actually afford but I did find a Thunder Cats Sale and "Luv Thinggies" that included my favorite type of armor: a mini skirt.

There was a ton of in game advertising in Ran Online. This ad tried to scare me into buying shoes by having an intimidating black man stare deep into my soul. There were movie ads in the game as well, featuring two Japanese movies and Harry Potter.

There aren't many quests in this game and I don't even think they give rewards for doing them. That said, the only real way to get money and experience is to grind on enemies in each area until you can progress to the next area and grind on the enemies there. If there was a definition of grind, this game would be it. Grinding wasn't going to grind by itself so I decided it was time to grind... grind.

I noticed that when the chain-wielding enemies die, they fall back into limbo position and manage to keep their cigarette in their mouth. They also have probably a forty percent chance at actually dropping gold (because in the future we go back to using gold coins) and when they do it is only about 8-12 gold each. The crappiest weapon I could possibly buy that was an upgrade cost around 1500 gold.

I went back to reading my quest log and found out there was some sort of Welfare office. Perfect! I will have my real sword with government aid! After being killed several times, I eventually stumbled into the welfare office but all the woman did was bark at me in broken English. I did manage to find a terminal that dispensed plants, but I could not use it.
Previous More MMO Roulette Next