The Absence of Light

After a lengthy scene of Puritan and Sultan searching for the unlucky bum, they finally track him to what appears to be a broken down boxcar. We see a shot of a moving train, and then, magically, they walk out of the same boxcar with the bum in handcuffs. The agents turn the poor bum over to the official Division 8 torturer. Midway through the bum having a power drill shoved up his nose, Puritan mentions that they have recovered the sex tape, then has the torturer kill the bum anyway. Remember, these are the good guys. 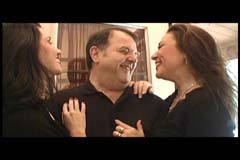 Vote Criswell!Oh, and while the folks at Division 8 are busy torturing people to death in order to tie up all the loose ends about this whole sex scandal, Senator Criswell does his part to help his campaign by sleeping with a lot more whores. Just&. just terrific.

Puritan and Sultan meet in a random graveyard for no apparent reason. Suddenly, they are ambushed by PLAGUE operatives who are trying to get the sex tape. Presumably, Puritan could just smash the tape and be done with the whole thing, but instead, there is a long, ludicrously bad fight scene which ends when the PLAGUE guys decide to run away for no reason, despite having a complete advantage. I don't really know what to tell you, here. This movie sucks. That's really all there is to it.

Two months later, the Division 8 office is still abuzz about the sex tape. New information has come to light, which indicates that the prostitute in the sex tape was actually a PLAGUE operative, and Criswell got her pregnant. Nice going, ass. Naturally, the next scene involves Puritan and the team torturer stabbing the girl in the uterus. To be fair, not all of Puritan's life is fun and stabbing. When he goes home, he falls asleep on the couch and has trippy nightmares about his long lost love and some high-voiced guy in a suit. This is meant to show how troubled Puritan truly is. Still, it's a little hard to feel bad for a guy who routinely tortures and murders people in order to save his client ten thousand bucks (minus his three hundred thousand dollar fee, of course).

Now, I can hear you saying, "Dammit, Greasnin, you promised us Michael Berryman and Tony Todd! So far, all you've given us is some fat guy and hobo murder!" Well, fine, I'll give you your Michael Berryman fix. You're going to have to wait for Tony Todd, but trust me, when his moment comes, it absolutely will not be worth it. 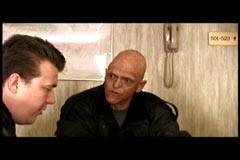 The man looks like a tic tac giving birth.Berryman plays Seer, a cryptic, Yoda-like advisor to Division 8. I know, Michael Berryman playing Yoda sounds cool, but believe me, it's not. First of all, the guy's useless. How useless, you ask? Well, in his first appearance, he shows Sultan and Puritan the Devour software. The Devour software that they already own. The Devour software that they used two months ago. Also, Michael Berryman's deformed physique is frightening when he's covered in black leather and spikes and trying to eat you. When he's just sitting at table, spewing needlessly vague bullshit, his deformities just make him look& deformed. Sorry, MB, but I calls 'em like I sees 'em, and brother, you lumpy.

Over the next few months, Puritan and Sultan, and the rest of Division 8 kill and torture their way to a missing copy of Devour. God knows why. Everyone and their sister has a copy of this thing, and it's worthless. The Div. 8 torturer goes to work on someone who has a probable lead, and finally gets a name. Meanwhile, Puritan and Sultan just ask Senator Criswell if he has any idea who it could be and get the same name free of charge. I honestly can't understand why this movie feels a need to point out its own assclownery, but it does. My best theory is that Patrick Desmond hates himself, and this, we can only hope, is his eighty minute long suicide note.

As you have probably guessed, the Devour situation resolves itself nicely with some more torture, proving that there is just nothing torture can't do. Division 8 also finds a lead on identifying the guy responsible for killing Sultan's fiancée. You had forgotten all about that, hadn't you? It's okay, so had Sultan. After another endless scene of gunplay in a wooded area, Sultan gets his revenge. It seems like every major scene of conflict takes place in the woods or a graveyard. These secret agent types are supposed to be influencing national politics. Shouldn't they at some point be in a city? Just a thought.

With one month to go until the election, a former Criswell employee becomes a problem. Yup, he's got a copy of the sex tape, too. In this day and age, it's impossible to believe that so many people could get their hands on a sex tape without posting it on YouTube, but you have to remember, this movie was made way back in 2004, when& okay, I'm not sure how to end this sentence. Anyway, Puritan and Sultan, being the smooth operators that they are, blow this troublesome ex-employee away with assault rifles while he's out for his morning jog. Yup, the cops won't find anything suspicious about this random doughy software engineer showing up riddled with three hundred rounds of high caliber armor-piercing ammo. Nothing at all. 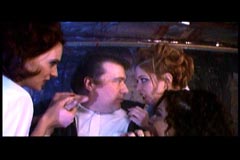 Sure. Why not.Puritan continues to have nightmares, this time dreaming that all the women in Division 8 are really vampires. They're not. I think Patrick Desmond just bought the money-saving Acme Big Box O' Generic Special Effects and couldn't find any other way to use the fangs. Can't blame a guy for trying. Wait a minute, sure you can.

PLAGUE (Jesus, are they even still in this movie?) decides to take care of Criswell once and for all. They tried the sex scandal route, but it just didn't take. Now, they're just going to blow up his office. We never learn exactly why they don't want Criswell to be reelected. He's such a sleazebag, it seems like the bad guys would actually be striking a blow for good by eliminating him, and yet, they remain the bad guys. You'd also think that they would have just tried blowing him up in the first place, rather than going through all the trouble of discrediting him. It's not like PLAGUE is exactly synonymous with subtlety, here. Anyway, they blow up his office successfully. Unfortunately, the senator isn't in it. He's out getting more whores. 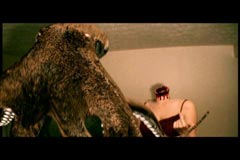 Woe that my life has led me to a point where I would have to caption this image.Despite the fact that Criswell was not, in fact, harmed in any way, and despite the fact that they weren't even on the scene, Higher Power blames Puritan and Sultan for& something. I guess he's blaming them for the senator not being blown up? Way to suck, guys. I think.

The stress of being blamed for his client's continued survival gives Puritan another nightmare. This time, he dreams that one of the Division 8 ladies is trying to seduce him. When he resists, her head turns into a detachable octopus, which flies off and eats his face. I don't know, Puritan. Maybe you should stop sleeping sitting up, on the couch, in your clothes, with the lights on. It's not like you don't have a bed. Try it out once or twice, see if that helps.