The Absence of Light

It's one week before the election now, and despite the scandal being covered up, Criswell is still losing. Who is this guy even running against? He's losing to himself! Well, if not being actively caught sleeping with prostitutes isn't enough to guarantee him a win, Criswell knows just the thing. No, not campaigning on the issues and meeting with the community. Don't be stupid. He's going for the sympathy vote! Never mind the numerous times he's had whores delivered to his house in broad daylight, Criswell clinches the coveted "Worst Husband and Father Ever" title by having Puritan and Sultan kill his wife and children. Chalk up one more for the good guys! 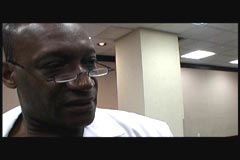 Sure enough, Whiplash, the head of PLAGUE, stole the Philosopher's Stone (uuuuuugh) and combined the genetic code of the planet's most dangerous animal into a new lethal creature called a Prometheus. As it turns out, combining the most dangerous animals on earth gets you a shitty CG alien, and not man, as comedy would have led me to believe. Division 8's scientist gets his hands on a Prometheus specimen& somehow, and honestly, it's just not all that threatening. It's not that it's a shitty CG alien, it's that it's roughly six inches tall. The scientist says it's so tough that a shotgun blast couldn't even pierce its hide, but I don't care. I just can't muster the energy to be frightened by a monster that can be trapped in a fish tank. 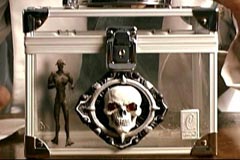 Terrifying.Puritan and Sultan follow information given to them by Alchemist, which leads them to a warehouse. Unfortunately for them, and for any hope of this movie starting to make sense in its final act, the Alchemist was working for Whiplash, and his information leads our beloved agents into an ambush! For some ungodly reason, one of the PLAGUE henchmen has the Prometheus specimen, despite that exact specimen appearing in Division 8's possession roughly thirty seconds ago. For some other ungodly reason, Puritan can shoot people by firing in the exact opposite direction. I hate this movie. Oh, also he uses the tracking device to taser some people. So at least there's that.

Then it turns out that there are a bunch of Prometheii (the full-grown variety, not the six inch kind) somehow running loose in the warehouse, causing all sorts of havoc for Division 8 and PLAGUE alike. Smooth move, Whiplash. You designed killing machines you couldn't control. That always works well. Honestly, has anyone in PLAGUE ever seen any movies at all?

In the interest of wrapping up loose ends that everyone forgot were there in the first place, Puritan's one-eyed mentor comes out of retirement just in time to save his protégé, as well as Sultan. For the record, the guy's shotgun is more than enough to pierce the creatures' hides. That Div. 8 scientist was just really bad at his job. Puritan and Sultan make their escape from the warehouse, then call in an airstrike to blow the whole place to bits, including the mentor. It sure is nice that Division 8 had a plane loaded with bombs and ready to go fifty yards away from some random warehouse this whole time.

Election Day finally arrives, and Criswell rides the death of his family all the way into office. His mission now complete, Puritan is free to retire and be with April, the girl he left all those years ago. Higher Power just has one last job for him before he cuts him loose. He wants him to kill& April! It makes sense, of course, because April is& I mean, because Puritan& that is, it& oh, fuck it, it doesn't make any sense at all. 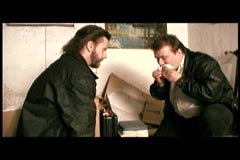 "Puritan, I'm sorry... sorry you're so fat!" "You're an asshole, Sultan. If I wasn't so fat, I'd eat your lunch. I mean, kick your ass." Heartbroken, but still willing to do what evidently must be done, Puritan tracks down April, who has been living the glamorous life of a crackwhore ever since Puritan ditched her. When he finds her, he discovers Sultan, being the good friend he is, has already killed her. The two agents fight, but Puritan soon comes to his senses, and realizes that April had to die. I see his point of view, although I would like to interject this one notion: no, she didn't. Puritan then kills Sultan. Then, as he leaves the scene of the double homicide, Puritan is approached by another Division 8 agent, who hands him a videotape marked "Criswell Sex Tape - Master Copy." The two men walk off laughing as the credits begin to roll.

Okay. Deep breath. If you've read this far, you're probably pretty pissed off. Somehow, "what the fuck" just doesn't sum up the feeling of watching this movie. This movie doesn't do anything that I haven't seen done worse elsewhere, but it's rare to see so many kinds of failure all crammed into one movie like this. There's a whole subplot about a rogue Division 8 agent and Whiplash using Devour to spy on his enemies, but I left it out because, honestly, what good would it have done? There's a throwaway line about the Alchemist's lab being owned by Senator Criswell, but otherwise, the whole election plotline is completely unrelated to all this crap about genetically engineered monsters that pops up at the end. Between a crooked election plotline, a stolen spy software plotline, a warring covert agencies plotline, a secret agent out for revenge plotline, and a secret agent trying to reunite with his lost love while holding off a mental breakdown plotline, could Patrick Desmond really not think of a direction to take this thing that didn't involve hilariously bad CG monsters? It's like he was trying to make six movies at once, but couldn't get his head around any of them. This man should not have been trying to write a movie without medication, let alone direct it.

To be fair, the performances were generally okay, although numerous scenes could have benefited from another take, as people dropped lines in some, said each other's lines in others, and generally stuttered through their roles in several more. The greatest crime from an acting perspective though, is how badly Patrick Desmond squanders the talented individuals he blackmailed into appearing in his film. To waste performances by Tom Savini, Michael Berryman, and Tony Todd in one fell swoop is absolutely embarrassing. Perhaps worse still is having someone like Tom Savini on set and torturing him by forcing him to appear in a movie with special effects that he outgrew by the time he got his first pimple. Patrick Desmond, you had some of horror's greatest talents in your movie, but you, sir, are truly this film's greatest monster.