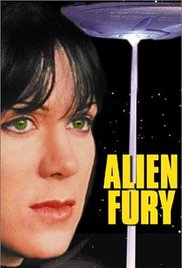 Overview: A secret government agency finds evidence of aliens lying in wait on the moon, and has to fight to...wait, never mind, the evidence was a hoax. A hoax to protect the existence of real aliens on the moon! Don't worry, though, the government is still 100% committed to nuking the fuck out of them, hoax or not. We think they were just waiting for an excuse to nuke the Man in the Moon, that smug bastard.

The Case For: Dondre Whitfield tries his hardest to channel Will Smith's spirit as a wisecracking police detective, but he has no colorful aliens to riff on, and instead of Tommy Lee Jones his comic foil is a real estate agent who really wants to sell him a 30-year mortgage, so the whole thing is just kind of depressing. 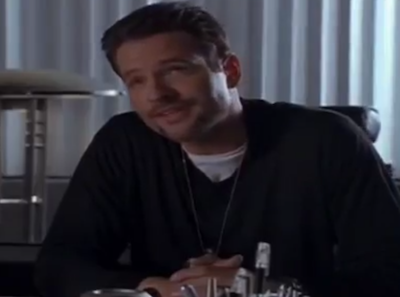 Alien Fury delivers on the alien part, but the titular aliens turn out to be pretty peace-loving folks and only seem to want to invade Earth in the event that we nuke the hell out of them first. In fact, it's just one guy who keeps trying to get them to invade us. This movie should have been called "One Alien Asshole's Fury". The movie never really explains why he's so pissed off at humanity, we're thinking maybe he's an incarb (involuntarily carbon-based lifeform), getting his revenge on a cruel universe run by super-advanced fembots and the trans-dimensional orbs that always hover around them. Always lording their connection to the intergalactic oneness of being over him - damn their unbiological fembot tendencies!

Let's back up: actually, Alien Fury isn't about that guy and his plot to get us all invaded. Well, it is, but only for about five minutes, because the screenwriter had an uncontrollable urge to add a plot twist on every page of the script:

We started to go cross-eyed around the time that the hoax was revealed to be a cover-up for the real aliens, who are coincidentally in the same place on the moon that we're going to nuke anyway, and this is all somehow playing right into their hands. Don't worry though, the L.A.'s finest detective is on the case to unravel the confusion! Well, at least L.A.'s most bored detective, since he just seems to sit around and watch wrestling on TV when he's not investigating space alien murders. Still, we'll give him some props for being able to just walk in the front fucking door of the world's most top secret government agency, sit at the head honcho's desk, and eat a bunch of his snacks without anyone noticing or caring.

That video also hints at the real driving force behind Alien Fury, far more important than all the alien nonsense: lawyers. Specifically, that one bald lawyer who really, really sucks at his job[1]. "Well, we just discovered your department tried to defraud the Pentagon and terrified the public with this whole alien hoax, but we're going to play along with you because we're less likely to be sued if we really follow through on the whole fake aliens thing and spend billions of dollars nuking the moon." Later, he advises the President of the United States that the entire Earth being obliterated by alien invaders would carry a high risk of litigation, whereas prematurely detonating the nuclear warhead is "covered by our insurance".

Actually, we can't be too hard on the lawyer, because nobody in this entire movie acts like a rational human being. Let's all take a moment to appreciate the breathtaking stupidity of the alien infiltrator who voluntarily submits to a chest x-ray at his physical, despite the fact that the aliens have four fucking lungs. Or the fact that the government defector with incontrovertible proof of the alien hoax decided to stash his proof on a CD-RW that deletes itself if you look at it, causing a solid 20 minutes of plot to pointlessly dead-end. Or our personal favorite, the wisecracking police detective managing to talk an enemy who has a gun pointed at him into an honorable fistfight, which is a ploy we haven't seen since The goddamn Dungeonmaster. It's like a trip down Memory Lane, specifically the bad part of Memory Lane with lots of meth labs and overturned burning cars.

[1] We really bought in to foreshadowing plot twist #762, wherein the lawyer is implied to be an alien impostor, because that would explain why he's risen to the highest echelons of our government despite giving the worst legal advice possible at all times.