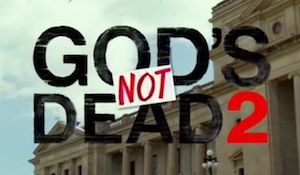 Overview: Sabrina the Middle-Aged Not-a-Witch stars as an oppressed Jesus-loving schoolmarm who is the subject of a witch hunt, except in a spectacular twist this time the witch hunt is for Christians, which puts us about nine layers of irony deep. Even more smugness ensues.

The Case For: Grossed $20 million to the original's $60 million, which at least restores a tiny shred of our faith in the American public's intolerance for preachy bullshit in movie form.

The Case Against: Features Pat Boone as a pointless old guy spouting bullshit like "The most basic human right...is to know Jesus", which is just a complete waste of his time compared to his musical career. 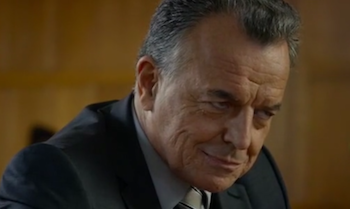 Why, Netflix? Why did you have to drop this steaming pile of blessed cinema in our list of recommendations, just because we were foolhardy enough to endure the first one? Finding out there's a God's Not Dead 2 is like going downstairs on Christmas morning and opening the first present, only to find that it's the severed head of your favorite childhood teddy bear. Then your mother ritually disembowels the body in front of you, while giving you a stern lecture on the dangers of idolatry. In short: supposedly this is all for your own good somehow, but in practice it's just mean-spirited, pointlessly ritualistic, and really, really preachy.

After steeling ourselves with the trailer for this wholly unholy circus of sanctimonious circle-jerking and realizing this time around it was going to be a heated courthouse drama rather than a tepid college philosophy class slap-fight, our prayers for another riveting Dueling Powerpoint Showdown between student and teacher were smacked down like a gay marriage bill in Mississippi. But like a ray of sweet light from heaven on high, new hopes broke through the clouds to fill us with the holy spirit of shitty moviness. A courtroom drama? Where God is literally on trial? Like Mary herself, suddenly we were raped with joy with the possibility that maybe, just maybe, the climax of this movie might somehow miraculously cultivate in the defense calling Jesus H. Christ himself to the stand in what would surely be the equivalent of the Arrested Development scene where Gob is called to testify with his racist hand-puppet using talking magazine soundbytes. We hoped it'd look something like this:

Jesus Puppet: "My name is GOD."

Ray Judas Q. Godless Liberal, ESQ.: "Y'honah, I'm just a simple backwoods evil atheist caricature, but in light of this new evidence, I reckon we ought 'smiss all chahges, y'hyuh?"

[Sabrina the Teenage Witch and Pat Boone high-five and freeze in mid-air, as the heavens open up to rapture all of the true believers and smite everyone who wasn't stupid enough to actually pay money to watch this movie to the depths of hell forever and ever, amen]

Tragically, none of that actually transpires in GND2: Ecclesiastical Boogaloo, but don't worry, the actual courtroom drama is much more ridiculous and implausible than any of that. Good thing Judge Ernie runs the world's most permissible circus court:

If the entire courthouse caught on fire, he'd probably just lean back in his chair and quip "I'd like to see where this is going" while the ceiling caved in around him. No amount of legal shenanigans can even faze him, including but not limited to:

But honestly, who gives a shit, since the stakes of the trial dropped from "existence of God Almighty" to "some lady might lose her soul-crushing job at a podunk high school for comparing Gandhi to Jesus once." All of the characters still treat it like the Second Coming hangs in the balance, of course, but that just makes us despise them even more. Especially the rich tapestry of returning characters from GND1, all of which walk the fine line between "who the hell is that?" and "fuck, I remember that asshole." There's the autistic Chinese kid with a list of Bible questions longer than the Dead Sea Scrolls, some reporter lady who was smited with cancer in the last movie and returns with no explanation or reintroduction to do nothing of consequence, and of course the Christian butt rock band who are instantly recognizable as such even before they start mewling about the holy spirit.

But of course, there's nobody we hate more than David A.R. White, a.k.a. the Ghost of Jesus Movies Past, Present and Future. Although he's a spectator for all the courtroom drama, DARW also gets a turgid little subplot in which jackbooted government thugs dare to ask preachers for copies of their already totally public sermons, leading to some civil disobedience in which he seems to be angling for a leading role in God's Not Dead 3. At least we get to enjoy watching him getting shoved into a squad car as a bonus scene, which is the long-awaited answer to our personal movie prayers.