Merlin and the Book of Beasts 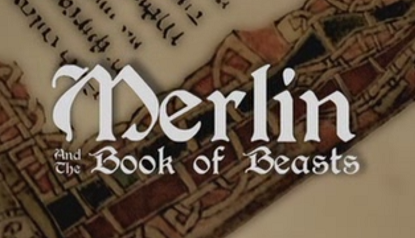 Overview: Captain Jack Merlin and his wacky band of rascally adventurers must find the fabled lost treasure of Tanto Willyboy Wanka in order to free the ghost of Bob Marley from his terrible curse and save the island of Scotch-Irish Jamaican Peru Tortuga from the Evil Guy who wants to draw them all naked and his dread army of magic twinkly butterflies before the universe is destroyed by ethnic confusion and James Callis' eyebrows.

The Case For: Easily the best multiracial pan-European-Australian Rastafarian Pirate Batman Merlin interpretation ever put to film. Also, the main plot-defining quest is described as "a fool's folly", and that means a really good thing because it's a double foolative (pretty sure we read that in a tome somewhere).

The Case Against: After the butterfly decapitation peasant genocide in the first scene, it's all kind of downhill from there.

Compared to most of the shit we have to watch here, this movie and (most of) the people in it are pretty high-functioning--downright sophisticated, even, next to something like, say, Zombie '90 or Total Retribution. Which is why we're not here to make fun of this movie. We're here to celebrate it. For once, we said to ourselves "selves, this week we should take a break from all the bloody, chunk-filled vomit, self-inflicted brain contusions, and smoldering piles of punched-out computer monitors, and watch a movie that's good, and nice, that we can say good and nice things about". We're not here to make fun of Merlin and his Beasty Book, we're here to celebrate them.

The first (and main) great thing about Merlin BoB etc. is this guy right here:

Yes, it's the one and only James Callis. You sci-fi nerdos out there might recognize him as Gaius Baltar from Battlestar Galactica, although his recognizability plummets if you actually watched that video clip, in which he shows off his acting range by delivering the exact opposite performance of his BSG "neurotic space Jesus" heyday.

As you can see, unlike the kindly, sagacious old trickster or scatterbrained alchemist Merlin(s) usually portrayed in your typical pop-media Arthurian yarn, our beast-booking version of Merlin is a little rough around the edges. Okay, more than a little. Okay, he's basically the wizard equivalent of Colonel Kurtz. Squatting alone in the deep, dark woods of whimsical Celticstan or wherever the fuck, hitting the ancient pipe of wisdom a little too hard and mumbling feverishly to all the rocks and stumps about how Kamelot was an inside job and also a sick band whose singer he would totally bang if he wasn't 500 years too old to remember how to use his enchanted serpent dilznik (his words, not ours). And so it was that the very first trans-continental Icelandic Trinidadian rasta-Britirish Scwellshotch Aussie Peruvian Merlin was born.

Pictured: actual reaction to the many moods of James Callis.Scene by enriching, life-affirming scene, Callis Takes us on A Whirlwind Mystery Accent Tour of the British Empire, Mordor, and Several Fantastical Wonderlands Which Only Exist in His Own Head. Even better, he colors most of this reckless identity jackknifing with a bold, Tom Waits-esque grungy gut-gurgling gigagrowl that sounds at all times like he's trying to suck the finish off a billiard ball with a lip disc as big as an ogre plate and an industrial-size sack of hardwood mulch in his mouth. Why, you ask? What could possibly have inspired such a courageous and brilliant creative choice? Well, we're actually not sure, now that you mention it (but thanks for asking). And honestly, we can't seem to get an interview with him to find out, possibly because we've never tried to do that or even really thought about it at all. We have, however, seriously invested ourselves in a number of crazy, wildly speculative theories, like:

-He's got early late onset dementia (fortunately we caught it while it was still in the early late stages, so he should send us money)

-Bathtub full of mercury. We don't see how that's even Merlin-related or why anyone would do it either, but we can't rule it out

-He fell asleep in the men's room at Arby's, and when he woke up the director handed him a robe and a bottle of pills and told him he was Merlin now and 'it'd better be good, see? myeah' in a Bugs Bunny cartoon gangster voice