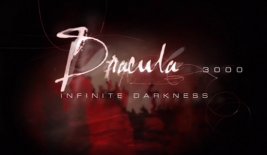 Overview: Next time you want to stump a movie buff, ask this question: "What was the worst movie released in 2004 about a man named Van Helsing who fights vampires?" If he says "Van Helsing", he may be right, because that movie reeked. But "Dracula 3000" is pretty bad too.

The Case For: Recommended for obsessive fans who absolutely must own every single movie which stars Casper Van Dien / Erika Eleniak / Coolio.

The Case Against: No such people exist.

I haven't been writing these movie reviews for a particularly long time. However, in the few months that I've been subjecting myself to poor cinema for nothing more than approximately $3.00 an hour, angry emails from Christians, and the guarantee that future employers will Google my name and fire me on the spot, I've learned a few things. One is that no matter what the movie, wherever it falls on the scale from sort of decently produced crap to absolutely abysmally produced crap, there is nonetheless some minimal level of interest I am able to muster about its plot and characters. Whether it's out of some facsimile of genuine interest (rare) or because I just want to see how completely stupid things can possibly get within ninety minutes, I have so far been able to keep myself from lapsing into a waking coma by latching upon some facet of the movie which is not utterly, interminably boring. That is, until Dracula 3000.

I have a certain routine when I sit down to watch one of these movies. After getting the DVD ready to go, I sit down with an array of laptops and keyboards and mice which allow me to watch the movie, take screenshots, and write down a summary all at the same time. Usually in this manner it takes me about twice as much time to get through the entire movie as it is long, as I pause to note down information, rewind to make sure I've gotten a quote right, induce vomiting, etc. This time, however, I can't remember pausing the film a single time or, indeed, even thinking about anything at all. I'll quote a sample of my notes for Dracula 3000 to give you an example of what I mean:

To explain, sometimes when I am completely uninterested in whatever it is I am supposed to be doing I will start playing a game with myself where I think of a dirty word and then start writing down all the rhymes I can think of. In this particular case I started hitting a wall and began to rationalize to myself why "tart" and "Pop-Tart" were actually different because the former could be used to define a certain sour-ish flavor while the latter was in reference to a certain toaster pastry and the word itself was not etymologically related as far as I knew so it shouldn't count as the same word and then I looked up and five minutes had gone by and a vampire was stalking somebody and I didn't know why and I realized that I really, truly, did not care.

Dracula 3000 is, supposedly, a sci-fi horror film. In practice, however, it appears to be the result of a collision of what little the director knew about those two genres, taken from what he could glean from his memory of 1970's late night movies while his mother was out looking for a new daddy. Add in the extra challenge of trying to make a feature length film with a budget of fourteen dollars and a bag of black tar heroin, and the resulting mess is neither thought provoking, nor exciting, nor frightening, nor any other qualities that could distinguish it from ninety minutes spent looking at, say, a real-time map of local traffic conditions.

Thrown in for good measure are the best C-grade celebrities money can rent. There's Casper van Dien, who I believe was actually once a movie star, at least on paper. Here, however, he is stuck somewhere between channeling Ewan McGregor and a flagpole. There's Erika Eleniak, whose bimbo/slut good looks have aged well past their expiration date, leaving her hanging by a fingernail to the "pretty young thing" demographic before plunging into the abyss of "harried single mother" roles. Then there's Coolio, whose entire acting oeuvre consists of, as far as I can remember, falling off a bicycle in the "Fantastic Voyage" music video and gesticulating wildly in the "Gangsta's Paradise" video. Finally there's Tom "Tiny" Lister Jr., best known for his commanding performance as President Lindberg in The Fifth Element, where his expressions spanned the monochromatic rainbow from "robot" to "android". Well, there's some other people in the movie too, but do you care? I don't.