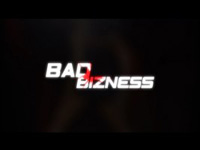 The Case For: Fake boobs have advanced from their humble beginnings. One day anthropologists will be able to date female human remains by the size and workmanship of their breast implants.

The Case Against: I don't need to watch a shitty movie to see fake boobs. The entire internet exists for that purpose. 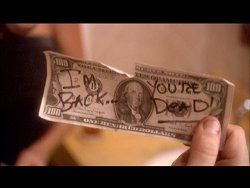 On one hand, someone wants to kill you, but on the other hand, hey, a hundred bucks.Before I begin, a word of explanation: this outing is being kept purposely short because I am still smarting from being tricked. "But Andrew," you are undoubtedly saying. "You're stupid enough to watch bad movies on purpose even though you hate them. You must get tricked ten times a day before lunch." This may be true, but until this point the bad movies I've had the displeasure of reviewing have all avoided a certain formula, one that I was hoping never to have to touch upon. "Bad Bizness" destroys those hopes, and now I have nothing left to believe in, except the superiority of Vanilla Coke to Vanilla Pepsi.

When I popped "Bad Bizness" into the DVD player I admit that I was holding certain expectations. Not because I actually expected any sort of entertainment, mind you, but because the DVD art prominently featured legendary rap artist Master P, perhaps best known for the seminal hit "Make 'Em Say Uhhh." A little known nugget of trivia is that the song was originally titled "Make 'Em Say America's Pledge of Allegiance" but Master P's tenuous grasp on the English language caused the lyric to to lose all coherence after the first three syllables and become a sort of monotonic guttural moan. I figured that the vaguely ebonical spelling of "bizness" in the movie's title meant that it would be some sort of hip hop take on the world of high finance, with perhaps Master P being nominated as the new head of the World Bank, or at least robbing a bank. If I had bothered to maybe read a description or any reviews I might have known better but hey, you know how it is. Not that the description adorning the DVD slip did a particularly good job describing the movie either. Here it is, with all the blatant falsehoods crossed out as not to confuse you, gentle reader:

Traci Bingham starsas an undercover cop who poses as a streetwalker and infiltrates a prostitution ringto catch a killer preying on the "ladies of the night." But things get too close for comfort as shesoondiscovers the murderermay be someone she knows. Rapper Master Pco-stars. 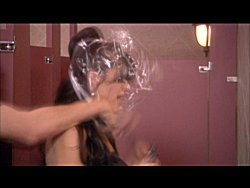 I've heard of a girl being "baggable" but this is ridiculous!!!!!!!!I knew something was up the second the movie started as a generic hip hop beat began looping every four seconds and the screen faded in on a stage where a scantily clad brunette trotted out and made her cladding increasingly scanty. I looked for Master P in the audience, where maybe he would disinterestedly watch the girl for a little while before taking a phone call and going off to broker a contract or something. Sadly Master P was nowhere to be found, and instead the audience was comprised of about thirty hooting and hollering white men, plus one solitary Asian man who grew increasingly overexcited and began hopping up and down and screaming with glee. Occasionally he would look at one of the men seated nearby and briefly make eye contact as if to suggest, "can you believe this girl is getting naked in front of us?" but then the other man, embarassed for them both, would quickly look away.

I kept waiting for the movie to cut to something else but the girl kept going on with her extremely protracted routine, dancing to the same generic beat that slowly began wearing a groove in my ear canal. Finally after a solid five minutes the girl finally wraps up her routine, and the men pelt her with wadded up bills, which she crawls around scrabbling to collect like an attractive fake-breasted bum. She then retreats back to the ladies' room, which apparently serves as the changing room for the talent at the club, and as she talks with another stripper she unwads one of the bills and finds that one of her loving fans has written "I'M BACK... YOU'RE DEAD!" on a hundred dollar bill. Despite the fact that her stalker is hardcore enough to deface a bill and thus risk the wrath of the Secret Service, she decides not to do anything about it, instead standing around in the bathroom all alone for a while. Finally the stalker bursts out of a stall and kills her with a plastic bag, a trick he surely cribbed from the PS2 game Manhunt. I thought maybe the murderer was Master P, but the forearms looked distinctly caucasian, so I was still left wondering when the fuck he was going to show up.

The movie then fades to black with the words "ONE YEAR LATER," allowing time for the repercussions of the killing of a random stripper to resonate around the globe. When the movie fades back in, Traci Bingham is aiming a pistol at a shirtless thug holding a butcher knife. "Well, that makes sense," I thought, "given that she's apparently some sort of undercover cop." Soon enough, after the thug has been subdued and Bingham, who is named "Sandra" here, goes back to report to her boss. Then I thought, "all right, maybe her boss is Master P," but instead it's the manager of a hotel / resort. "Next time, wait for the police!" the boss screams at Sandra and her partner Pete, who looks like every vaguely grizzled white guy in a movie ever. Apparently the two of them are the only security force at a giant 12,000-guest island resort, which is never actually shown in its entirety because the movie was filmed at the local Howard Johnson.