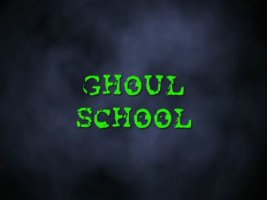 Overview: I think the only reason "Ghoul School" exists is so a bunch of kids had a reason to scream obscenities and play with fake blood. That's not a bad reason, I guess, but it doesn't excuse the fact that the plastic used to press the DVDs could have gone to manufacture something more useful, like giant novelty pimp cups.

The Case For: About thirty seconds' worth of kind of decent gore, if you're so hard up for seeing people getting their limbs torn off that you absolutely must see every single instance of it happening on film, you goddamned sicko.

The Case Against: The other 71 minutes and 30 seconds.

The low budget gore flick has a long and proud history, ranging from... well, I don't actually know. There are some people who love nothing more than to sit down on their stained corduroy couches with a low-quality VHS cassette of some stupid movie about aliens who can make people's heads spontaneously turn into paper mache models filled with strawberry jelly. Whether or not their alien powers also cause the ensuing explosion of the head is unknown to me; it may in fact be an intrinsic property of that particular brand of strawberry jelly. In any event, there are those who absolutely adore such films, and revel in their cheesy camp. One of the most interesting aspects of "Ghoul School" is that the two quote unquote heroes, Steve and Jeff, are a couple of Fangoria-reading low budget horror flick lovers themselves. Not surprisingly, they are also underachieving nerdy losers, giving that extra whiff of authenticity. Maybe this is some sort of meta-commentary on the sort of people that would end up watching "Ghoul School." Maybe this is a finger in the eye of the whole horror establishment. Maybe "Ghoul School" is just a parodic exercise in the basest sort of execrable nonsense that passed as a horror film in 1990.

Just kidding. It's just another piece of crap.

Even judged by the historically lax standards of cheap horror films, "Ghoul School" is a failure. Plot? Acting? Come on, I'm not stupid. Cheap gore flicks are where young actors' dreams of stardom go to die, nestled among ear-splitting screams and awkward enunciation. No, gore flicks are about gore, and even then "Ghoul School" is a sad disappointment. I understand that a $10,000 salary can only buy you so many pieces of meat to stuff inside clothing and rip apart, but the movie blows its wad in the first twenty minutes. Soon after the zombies or ghouls or whatever emerge, they attack their first victims and there's several great shots of their limbs being slowly and graphically torn off, then as the coup de grace, the zombies peel back a guy's abdomen like a sardine can, revealing the quivering viscera below. Now that is what a gore flick is all about. So what does "Ghoul School" give as a followup during the remaining 50 minutes? A bunch of kids running around in blue makeup, occasionally attacking people offscreen while the camera lingers on streams of fake blood being squirted against walls. No offense to anyone who might have worked on "Ghoul School" a decade and a half ago, but fuck you and your mother. With the absence of constant, mind-deadening blood and guts, I have to focus on the characters and dialog, and that is a sin against God and man.

The movie opens with the first of many long, lingering shots on the facade of a generic high school, no doubt intended to pad the movie's running length from an anemic 68 minutes up to a muscular 72. Just when I was positive that the DVD was scratched and the movie had halted, it finally cuts into some sort of boiler room, where a fat, ugly man stumbles into the frame and slowly begins to fumble with some sort of metal box inset in the wall. Normally when a movie calls for a fat ugly man it portrays a specialized Hollywood version where the man is sort of fat and sort of ugly but not in any really offensive way. "Ghoul School" has no such production values, however, and the man, who turns out to be the school janitor or something, is hideously misshapen with a revoltingly overhanging gut and a face made for telegraphs. Everyone has expressed some disbelief at the old cliche where the "ugly" girl in a movie is played by an ridiculously attractive young woman dressed down in thick glasses and hairpins. Turns out that such yawning chasms of believability, however ridiculous they may seem, are infinitely superior to the real thing. The janitor in all his fat, sweaty glory is easily the most frightening creature in the entire movie, another case of poor planning on the part of the director.

Not only is the janitor fat and ugly but also drunk and stupid, as his sausagelike fingers struggle to find the dexterity required to open the box, which is not actually locked in any way. When he finally manages to get it open, he hits himself in the head with the hinged door, and actually wags his finger disapprovingly at it. Finally he reaches into his pocket and pulls out what appears to be a deck of ordinary playing cards. He glances around furtively, counting the cards like some joyless miser, and then sticks them in the makeshift safe and shuts the door. He walks back into his little living arrangement nestled among the steam boilers, looks through some desk drawers, and finds a small empty bottle of alcohol, which he attempts to drink despite being made of clear plastic and obviously empty. Emitting a low moan, he attempts to extricate the last few drops of precious booze, first with his tongue, then with a finger. Meeting with failure, he finally tumbles onto his makeshift bed, which collapses beneath him. If the movie ended here it could be submitted as a dramatic short about the misery of a failed existence and probably win some awards at Sundance. Unfortunately the director found he had five hundred more dollars to burn and decided to append a stupid zombie storyline onto it.

The scene shifts to some low income housing where one of the movie's heroes, Steve, is arriving to meet his friend Jeff before they go off to school. Inside, Jeff is eating a bowl of cereal when his unemployed older brother comes in and starts harassing him. The old brother apparently does not share that loving fraternal bond common among sibling pairs: "Hey little faggot, what is this, some sort of girly slumber party?" He notices that Steve appears to be eating his cereal, and grabs for it in an attempt to regain his hard earned property. Jeff displays the sort of indignant territorial rage so common among nerds. "They're my Droobies!" he screeches pathetically, his lip curling to an impossible angle. His older brother is in no mood for games and extinguishes his cigarette in Jeff's bowl, cussing him out some more. Jeff knows that he is beaten, and he and Steve run off to school. The degenerate brother sits down and adjusts his crotch. "Mom?" he yells, to no reply. "Bitch," he adds, and is never seen again for the rest of the movie.