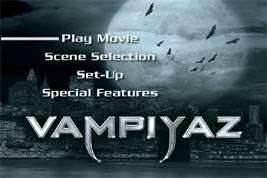 Overview: Vampiyaz is an awfully exploitive title for a movie that seems like it was actually made by people livin’ in the proverbial hood. Unfortunately, just because you’re “from the streets” doesn’t mean you automatically know how to tell a competent story about them. Vampiyaz combines the shoestring budget and wooden acting of a bottom tier indy film with the filmmaking consistency of a family vacation video that catches a volcano erupting. It’s Dracula by way of the Hughes brothers by way of a paper bag full of glue fumes.

The Case For: You’ve already seen every shitty crime movie with a cameo by a rapper and want to expand your horizons into shitty crime movies with vampires and magical amulets. It might also work as a slapstick comedy for professional safecrackers.

The Case Against: Two of the five human senses, possibly three of six if you count “precognizant dreams about terrible vampire movies” as a sense. 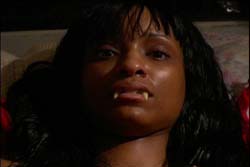 Oh no, uh-uh, you di'n jus say that to this Vampiyah.If there’s one thing I think every moviegoer can agree on it’s that the American film industry needs to make more movies about vampires. Since no Hollywood studio had the brass to cover such a controversial subject matter the task fell to independent filmmakers like Winston Z. Brown. In his 2004 film “Vampiyaz” we at last have a motion picture that deals respectfully with the issues of vampirism in modern urban life. Trust me, it’s in there somewhere, not too long after the second safecracking scene but before the third or fourth.

The film begins with chatty hooligans Jakeem and Khalil hanging out in a garage together and doing what all young black men like to do; practice safecracking. Jakeem listens carefully to the tumblers of a small fire-safe while Khalil keeps track of the time. When Jakeem manages to finish up before the timer runs out both men cheer with jubilation. They prepare for their nocturnal raid on the safe of an area home.

Meanwhile, a man with a pistol enters a house and seems to search for something. He is subsequently tackled and bitten by a woman with vampire fangs who makes the same sounds the alien warriors made scuttling into combat in the movie “Aliens”. This stock sound effect is repeated much later in the film again and again to represent the noise vampires make when they bite people. It looks pretty much like a person biting another person on the neck, and the vampires do not otherwise make strange sounds, but for whatever reason the act of biting down with their fangs make them sound like a cross between a snake and an elephant. The pistol man is presumably killed, although who knows because this whole sequence is never really tied in to the plot in any way.

Jakeem and Khalil arrive in their car outside the house they have been planning to rob for some time. Jakeem dons a budget priced ninja costume and Khalil puts on the worst luchador mask since Psychosis took to the squared circle. They sneak into the house and up the stairs to the bedroom where the safe is kept. Unfortunately, the safe is right next to the bed and the bed is currently occupied by a man in a child’s pink sleeper and a baby bonnet. Jakeem seems more concerned with the fact that the bed is occupied than the little detail that the man sleeping there is dressed like a baby. He refuses to attempt his safecracking routine and a heated dispute develops with Khalil. 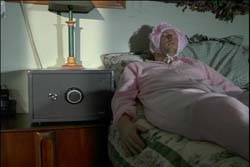 A wonderful motion picture with wonderful ideas!Khalil finally persuades Jakeem to sneak into the room and attempt the safecracking by offering an 80/20 split on the loot. Using a stethoscope taped to the safe Jakeem expertly disarms the tumblers and opens the safe to remove a wad of jewelry and cash. Just as Jakeem and Khalil are about to make good their getaway big baby wakes up, draws a pistol from beneath a pillow, and fires once wounding Khalil. The two would-be burglars beat a hasty retreat but the man in the pink sleeper is hot on their heels. He corners the duo at the door and after a heated exchange with Khalil pulls the trigger as if to shoot the rudos luchador. The gun clicks but does not shoot.

Khalil realizes he has cheated death and screams in defiance at the big baby. Jakeem pulls him towards the door but as he does the momentarily stunned big baby regains his composure and launches into a whole new profanity-laced tirade. Before Jakeem can stop him Khalil draws a pistol and shoots the big baby at point blank range. This causes a ring of pudding-like pink blood to appear in a ring around the baby’s mouth and makes Jakeem quite unhappy. As they flee in their car Jakeem, understandably mad over Khalil’s unnecessary slaying of the infantilist, continues to berate Khalil at length. Khalil silently endures this for a number of seconds but finally he can take no more and begins punching Jakeem in the face repeatedly. Jakeem, suddenly unable to drive the car very well, slams straight into a woman who is standing immobile in the middle of the country lane.

Jakeem removes the keys from the ignition and staggers out to find the woman sprawled unconscious in the road. Khalil angrily tries to get him to return to the car but Jakeem refuses. When Khalil hears sirens approaching he shoots his friend and takes the keys from him. The scene ends with Jakeem groaning in pain and the woman staring at him meaningfully as sirens can be heard approaching in the background. This last part is worth noting because it plays into one of several of the movie’s gaping logic holes. 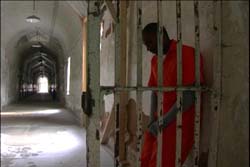 Profound statement on the solitude of prison life or a lack of budget to rent more than one uniform?Khalil, having eluded whatever authorities were en route to the scene of the accident, ditches the car and takes the subway to a vague location near a fence. At this point he digs out the plastic bag full of loot to find a big wad of jewelry and a giant amulet. No sooner has the huge red plastic gem in the amulet caught Khalil’s eye than a woman approaches him and tries to solicit sex. He swats her away when she fumbles for his belt but the supposed prostitute refuses to take “no” for an answer and chokes Khalil with one hand. Khalil manages to bust a cap in her…well, he doesn’t actually shoot her there’s a gunshot and an explosion superimposed over her back, but we’ll let that slide.

Khalil flees to a nearby parked car and finds its driver’s side door open and the key still in the ignition. He takes a seat and prepares to start the car but through the magical omnipotent camera of Winston Z. Brown we see that the woman is in the back seat of the car. Hey, she was shot! Perhaps she was, but she also seems to be a vampire, and with a xenomorph cry her bared fangs descend on poor Khalil’s neck.

Jakeem languishes in a prison that brings new meaning to the term “solitary confinement”. He is literally alone in his bright orange jumpsuit. There is no sign of guards or fellow prisoners and all of the doors seem to be sitting wide open. Perhaps his conscience and an inability to step through doorways explain why an interstitial card proclaims the passage of eight years.

Jakeem is released from his prison of one and heads to a payphone to give his parents a jailbreak ringy-dingy. Ma and Pa Kettlecracker want nothing to do with their wayward son. Jakeem checks in to a motel, strips down to his boxer shorts, and calls a woman named Sheryl. Not much later Jakeem is fully dressed again and the meaty Sheryl arrives brandishing a sassy hooker demeanor and a scar on her upper arm that looks like a shrapnel wound. Jakeem is initially put off by Sheryl’s forwardness but with a childlike voice he convinces her to “hold him for a while”. It perfectly captures the pathos of the moment of spending eight years in prison all by yourself and then feeling sad about it.