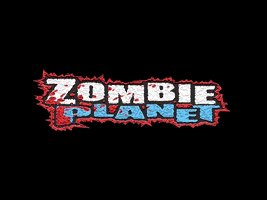 The Case For: Why must there be a case for? This movie isn't so horrible that you can get wasted and cackle like an moron, and it's leagues away from being good enough to actually enjoy on its own merits. It sits in the middle ground of vaguely inoffensive boring badness. Fine, you want something? There's one halfway decent fight scene about halfway through. Tra la la.

The Case Against: Nearly unbearable two-hour running time makes it the shitty-horror equivalent of Gone with the Wind. And both take place in the South after a devastating societal upheaval... hey, I might be onto something. 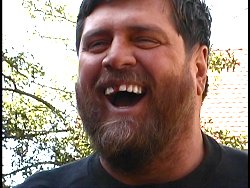 In the post-apocalyptic future, dental hygiene is unheard of. Wait, those are that guy's actual teeth? OK, it's just a southern thing.Before I begin I would like to give a big shout out to everyone who took the time to write me with suggestions of crappy movies of the non-horror persuasion. While I got a couple dozen suggestions in total, all but maybe two or three were sci-fi or action, suggesting to me that maybe the gamut of bad movies is much more skewed than I had hoped. Make no mistake, I can watch people in face paint practice their best snarls all day long, but I was sort of hoping that there was a treasure trove of stupid low-budget Depression-era melodramas, or Victorian romances. The lack of such genres suggests two possibilities.

The first is that the creators want to stick to something with the best chance of making money. This doesn't seem all that likely because I refuse to believe that any of the retarded movies I've subjected myself to have actually made any money. True, the bar is set pretty low when you're filming scenes in the high school gymnasium in exchange for a case of Keystone Light so the janitor will turn a blind eye. But when your movie is named, oh say, "Zombie Planet," there is not a single self respecting person on this non zombie planet that is going to spend their money to watch it, unless they enjoy suffering, in which case they could, oh say, write reviews of said terrible movies.

The second reason that all really terrible movies seems to fall into the holy trinity of horror/sci-fi/action is because the people that make them are, and I don't want to dip into hyperbole here, cripplingly retarded. I happen to love stupid action movies, but there can be no doubt that horror or sci-fi or action movies have greatest appeal to those who are, again, retarded. Upon securing the funding from a senile great-aunt who thinks she's renting a dialysis machine, the triple threat writer/producer/director sits down with a newsprint sketchbook and a magic marker and begins scrawling out the names of past movies that he's enjoyed and would want to follow the example of. Somewhere between "Commando" and "Timecop" his brow starts to furrow from exertion and before long he's slapped together something about vampires or aliens or men with guns that doesn't upset his brain's delicate neurochemical balancing act already strained between breathing and remembering the route to the liquor store.

In relative terms, "Zombie Planet" is not particularly stupid. Don't get me wrong, it's still stupid, but not offensively so. Ironically, this turns out to be the film's biggest weakness: I am so used to being continually assaulted by watching terrible movies -- both mentally and spiritually -- that in the rare case that the movie shows flickers of something approaching actual competence, the power necessary to maintain my Batmobile-like shielding against the onslaught drains away, and all that is left is a stupid movie that doesn't even have the common courtesy to make me actively fight back.

"Zombie Planet" opens in what it describes as "a southern city." Maybe this is because the director wanted all southerners to feel the territorial pride of knowing "Zombie Planet" might have been filmed in their hometown, because the entire movie takes place in an utterly nondescript suburb. There's another notice mentioning that it's the near future, and this immediately backed up by showing a high-rise with a animated GIF of fire composited over it. This is because in the apocalyptic future, buildings are always catching on fire spontaneously, since the safety inspectors are all dead.

The scene shifts to a guy with long hair and a black trenchcoat walking down an alley. At first I hoped this was just an establishing shot of some random nerd, and the star of the film would be something a little less boring than "vaguely menacing white guy in black trench coat." Then he pulls out a cigarette, which means he's not only vaguely menacing but also cool, and it became clear that this, sadly, was to be our protagonist. 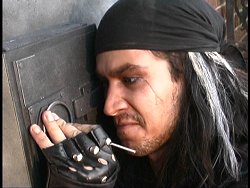 Captain Jack Sparrow picks a lock. Or Kane does. Whatever.As he's hanging out among the ruins of civilization, dozens of zombies begins to appear out of nowhere and slowly surround him. The hero looks mildly concerned, but the zombies are sufficiently stupid, and attack him one by one, allowing his underdeveloped powers of kung fu to take them down. Slowly the zombies go down as they are met by badly executed punches and throws and ninja kicks. After a while he grows bored of plain-vanilla hand to hand combat and pulls the wire out of a nearby power converter, which is apparently still active in this not quite so apocalyptic future world, and executes his special move, zapping everything within ten feet at once.. However, there are too many zombies for one man to handle, no matter how long his hair and black his trench coat, and after a while our hero begins to look a little panicked.

Just then, the scene shifts to a boarded-up house where a couple of hillbillies are sitting around staring at the walls. One is holding a deck of cards and occasionally places some down on a table in some sort of game while stroking and cooing at a decrepit plastic baby doll cradled in his arms, indicating that he's the feeble-minded hillbilly, and the other ones giving him strange looks are relatively normal. A couple more hillbillies are peering through chinks in the boarded-up windows when the trench coat mafioso appears in front of the house, running from the zombies and occasionally beating one or two up. Outside the situation is looking dire. "I'm going to slice you up," one zombie growls. "I want the white meat," intones a second. The hero is shocked, because zombies aren't supposed to talk. Before the exceptionally eloquent zombies can make good on their promise, the hillbillies swing open the steel front door and pull him in.

The next day our hero wakes up to find himself lying in a dirt field with a girl watching over him. As he gets up and looks around he finds that his trench coat is missing and a couple of hillbillies are rummaging through the pockets. The hero's indignance knows no bounds: "That belongs to me!" he roars, grabbing his grubby coat back and sneering at the people who just saved his life. He starts pacing the dirt lot while the hillbillies try to ask him who he is and where he came from, and it soon turns out that pacing the dirt lot is the most popular activity among the scores of other hillbillies who are all pacing around the dirt lot. Some of them are poking at the ground with trowels, apparently trying to dig up the most exquisite rocks, because there are no crops nearby. Another set of girls are busy at work pulling teeth out of a corpse for some reason that is never mentioned.

The leader of the "Dregs" as the ragtag band calls themselves, again asks our hero who he is. Finally he relents: "T.K. Kane," he says. It might actually be "Cain" or "Cane" or "Kaiynne" but I found it more likely that the hero of "Zombie Planet" was named after a wrestler than a biblical character, so Kane it is. The leader of the band reveals that the Dregs live under the rule of the local warlord "Adam." Wait, so maybe it is Cain. Oh well, too late now.